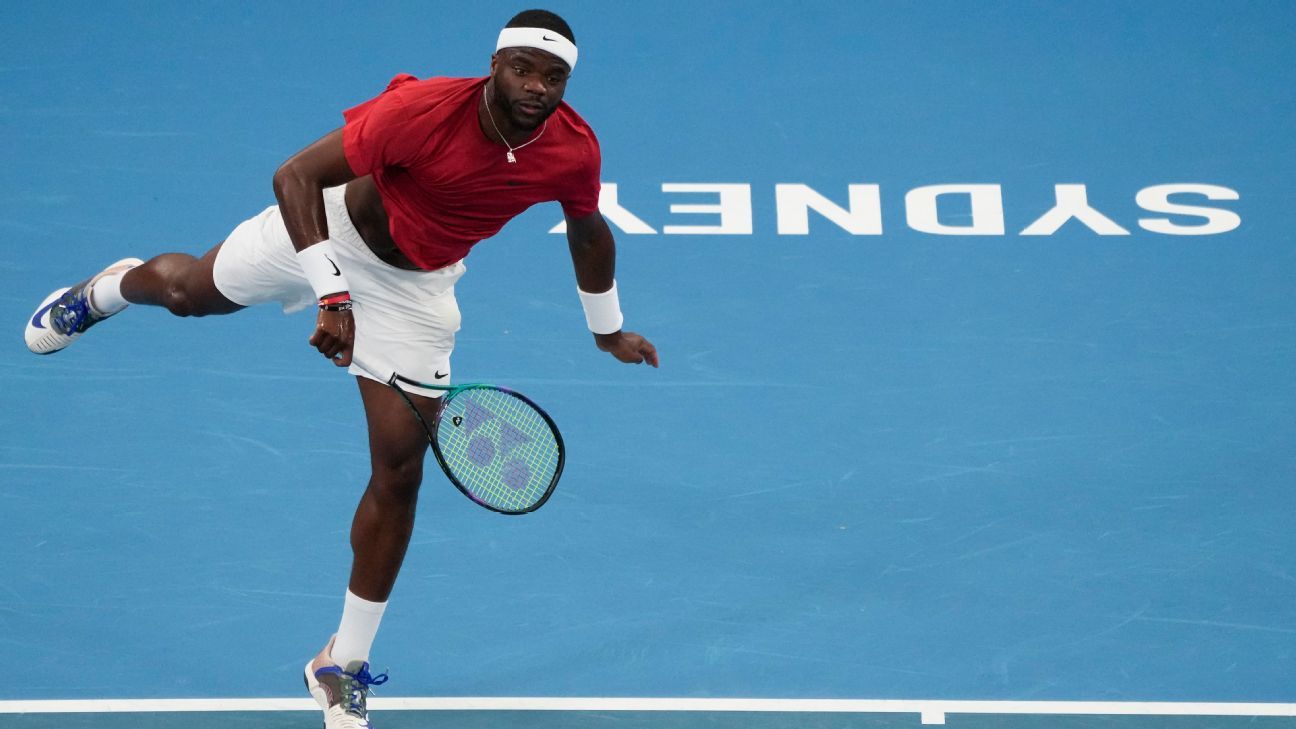 SYDNEY — It wasn’t the way Frances Tiafoe would have preferred to clinch a match at the United Cup mixed teams tennis tournament.

The United States defeated Czech Republic when Tiafoe’s opponent Tomas Machac retired due to a right ankle injury in the second set of their singles match Friday.

Tiafoe won the first set 6-3 at Ken Rosewall Arena in Sydney but trailed 4-2 in the second to his Czech opponent when the match ended due to Machac’s injury. After trying to retrieve a forehand shot from Tiafoe, Machac was able to rise to his feet but after consultation with a doctor and his team, he decided he could not continue.

“We were in the midst of a battle,” Tiafoe said. “It sucks that I got over the line this way. You don’t want to see that. Hopefully he can get right for the Australian Open.”

The first Grand Slam tournament of next year begins Jan. 16 in Melbourne.

The Americans went into the second day of the five-match encounter leading 2-0 after singles wins on Thursday by Taylor Fritz and Madison Keys.

But two-time Wimbledon champion Petra Kvitova saved seven set points to beat world No. 3 Jessica Pegula 7-6 (6), 6-4 in the first match Friday to keep the Czechs in with a chance of victory.

“We keep fighting,” Kvitova said. “I think USA is such a great team with great players in the team. We are not really favorites here, but we are fighting every match, every point. That’s our team spirit.”

From 5-1 down in the tiebreak, Kvitova saved three set points before earning her eighth set point at 7-6 and finally converting to seal the set. After her first-set escape, Kvitova broke Pegula twice to build a quick 3-0 lead.

The U.S. later won the mixed doubles for a 4-1 final score line.

Greece lived up to its top billing by beating Bulgaria 3-0 in Perth, Western Australia. On Thursday, Stefanos Tsitsipas beat Grigor Dimitrov 4-6, 6-2, 7-6 (4) and Despina Papamichail came from a set and a break down to defeat Isabella Shinikova 3-6, 6-4, 6-1.

On Friday, Maria Sakkari completed the Greek win with a 6-3, 6-2 victory over Viktoriya Tomova.

Matteo Berrettini made a good start to his season to help give Italy a 3-2 win over Brazil at Brisbane. The Italian player beat Brazilian No. 1 Thiago Monteiro 6-4, 7-6 (7) to give his country a 2-1 lead and Lucia Bronzetti clinched the Group E encounter when she beat Laura Pigossi 6-0, 6-2.

“Pretty happy I have to say. It’s been a long time since I’ve played my last singles match, so I didn’t know what to expect. I think the level was pretty high,” Berrettini said. “I’m happy for my performance, but obviously when you play in these kind of competitions the most important thing is to get the win.”

In later matches, Britain took a 2-0 lead over Australia at Sydney, as did Switzerland over Kazakhstan at Brisbane and France over Argentina at Perth.

Two singles matches — one men’s and one women’s — are played over each of two days, with a mixed doubles to conclude the five-match encounter on the second day.

The inaugural United Cup has teams from 18 countries competing in Brisbane, Perth and Sydney through to Jan. 4. The three city champions and the next-best performing country from the group stage will meet at Ken Rosewall Arena from Jan. 6 to 8 to determine the overall winner.

Marlins add DFA’d reliever Barnes from Red Sox
Transfer Talk: Arsenal push for Chelsea’s Jorginho before deadline
6N: England’s Farrell, Marchant in, Tuilagi out
“Historical Female Figure” Virat Kohli Would Like To Take Out For Dinner? Superstar Answers
Who has the most talent in the minors? Ranking every MLB system from 1-30