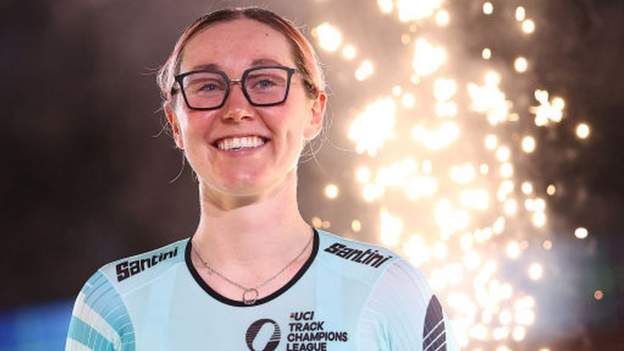 Defending champion Katie Archibald goes into the final round of this year’s UCI Track Champions League eight points off the lead in the endurance standings.

The Scot, 28, was second in the women’s scratch race in London on Friday but came seventh in the elimination.

William Perret was the only British winner – in the men’s scratch race – so he, Mark Stewart and Oliver Wood are in the top six of the men’s standings.

The final round is also held at Lee Valley VeloPark on Saturday.

The Champions League format sees endurance riders compete in scratch and elimination races and sprint riders go up against each other in keirin and sprints.

The men’s and women’s sprint and endurance champions will be crowned after next week’s final leg of the five-round series, held in London, where Archibald clinched the women’s endurance title in last year’s inaugural series.

She came into round four this year just one point behind USA’s Olympic and world champion Jennifer Valente and put the pressure on by claiming second in the women’s scratch race, behind Ireland’s Emily Kay.

Laura Kenny, Great Britain’s most successful female Olympian with five golds, came into round four joint-last in the endurance standings.

The 30-year-old won scratch race gold at the same venue in this year’s Commonwealth Games but was not in contention this time round, finishing 16th.

Kenny was second out in the elimination race while Archibald had to settle for seventh, with Valente winning to regain the lead in the standings.

Earlier, Perrett won the men’s scratch race, with fellow Briton Stewart fifth, and Perrett was also the last Brit out in the elimination race, coming fifth as USA’s Gavin Hoover claimed the win.

Claudio Imhof and Sebastian Mora are joint-top of the men’s endurance standings with 99 points, ahead of Mathias Guillemette (93) and Stewart (87), with Wood (77) and Perrett (76) still in contention.

Australia’s Matthew Richardson won the men’s keirin and is top of the sprint standings, just two points ahead of the Netherlands’ Harrie Lavreysen, who cut the deficit by winning the sprint.

Mathilde Gros of France is nine points clear of Canada’s Kelsey Mitchell at the top of the women’s sprint standings.