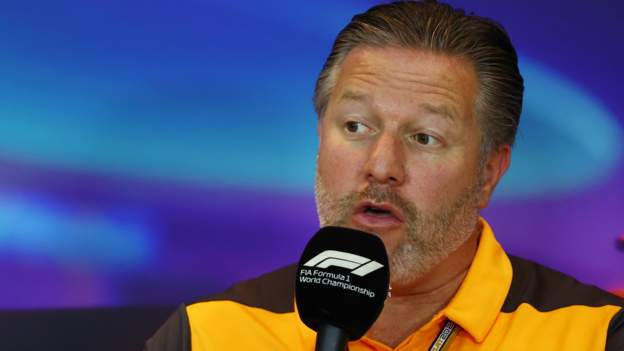 Red Bull were prevented from signing American Colton Herta for 2023 because he did not have sufficient points under governing body the FIA’s ‘super-licence’ system.

Brown said the super-licence “around IndyCar needs to be reviewed” and IndyCar should be treated in the same way as Formula 2 in the qualification system.

McLaren gave Herta a test this year, as they have with two other IndyCar drivers, 2021 champion Alex Palou and McLaren’s own driver Pato O’Ward.

Brown said it was “a shame Colton Herta isn’t in F1”, adding that all three were “capable of being F1 drivers”.

Although winning an IndyCar championship guarantees a driver the 40 points required for a super-licence, any other finishing position in the top 10 gives less than that.

In F2, the top three positions in the championship all earn 40 points. For IndyCar, there is a sliding scale of points for lower positions. But below first, all places in F2 earn more than the same position does in IndyCar.

It was this disparity that prevented Herta from earning a super-licence.

Red Bull had wanted the 22-year-old, who is a seven-time winner in IndyCar and regarded as one of its most talented competitors, for their Alpha Tauri team in 2023, to fill the place vacated by Pierre Gasly’s move to Alpine.

But the FIA refused to make an exemption for Herta, so Red Bull instead turned to former F2 and Formula E champion Nick de Vries.

“The thing that I’ve seen about Mohammed is he’s prepared to challenge rules that are in place and fix them moving forward,” Brown said.

“So he’s playing it by the rules – ‘These are the rules and we’re not gonna bend the rules,’ which I think is the right thing to do. Even if we think the rules aren’t good, such as the super-licence.

“But what he’s very prepared to do is go: ‘Maybe that’s not a good rule. We should review that rule and make a change.'”

McLaren have signed Oscar Piastri for 2023, to replace Daniel Ricciardo, who they dropped a year before the end of his contract because of underperformance.

Brown said he had high hopes for Piastri and expected the 21-year-old Australian to be a good foil for their lead driver Lando Norris.

“Lando is one of the fastest drivers on the grid and I expect he and Oscar to be close,” Brown said.

“I expect Oscar to have some opportunities to beat him and vice versa. And that’s obviously what you want – two drivers right next to each other and reversing the order.

“I don’t have any expectations or set out – this is what (Piastri) needs to do by this date. But Lando is as fast as anyone in Formula 1 and in race-winning equipment, he’d be wining races. I think probably everyone would agree with that.

“So Oscar is going to have a team-mate that’s one of the fastest drivers in the world. But I fully expect Oscar, in time, to challenge Lando.”

Piastri joins McLaren after a year on the sidelines as Alpine reserve driver, following his F2 championship victory in 2021.

McLaren and Alpine were involved in a dispute over his future in the summer, and F1’s Contract Recognition Board (CRB) declared in McLaren’s favour, stating that Alpine did not have a valid deal with Piastri.

Alpine’s preference had been to re-sign Fernando Alonso and loan Piastri to Williams for two years. They did not want to offer Alonso the two-year deal he required and did not budge in negotiations, believing the two-time champion had no alternatives.

As it was, Alpine’s tactics backfired. Alonso left to join Aston Martin following Sebastian Vettel’s retirement. And while Alpine were trying to play hardball with Alonso, Piastri and Webber decided Alpine were not sufficiently committed to them and that they would be better off signing for a team who they believed wanted them more.

Alpine team principal Otmar Szafnauer and chief executive officer Laurent Rossi have been critical of Piastri’s behaviour, saying he was disloyal after the support the team had given him.

Brown said: “I’ve been very impressed with how he conducted himself over the summer. I thought Otmar’s comments towards Oscar were very unfair and not accurate. Especially having sat through the CRB and now I know exactly what happened.

“I thought the way Otmar called his integrity into question was very inaccurate and unfair, especially coming from Otmar.

“And (Piastri) was very mature through the whole process. For a 21-year-old having all that pressure and spotlight, he was not frazzled, kept his head down.

“We’ve had him in our (old) car. He did an excellent job and I think he’s going to be a future star.”

Brown said observes should bear in mind Piastri’s inexperience and the fact that teams get only three days of pre-season testing in 2023, split between their two drivers.

“What’s important is he’s not raced for a year,” Brown said. “We don’t have a lot of testing and I wish there was more pre-season testing. Not just for Oscar, but just in general.

“Because effectively he’s just going to get a day and a half. Which is not a lot. I think he’s going to be competitive and push Lando. We just need to give him time to grow into the team.”

Ben Sulayem said over the weekend of the season-closing Abu Dhabi Grand Prix that the FIA would “review” the policing of the first year of F1’s budget cap.

Last month, Red Bull were found guilty of exceeding the cap in 2021 and fined $7m and deducted 10% of their aerodynamic research allowance for a 12-month period.

Brown said that one change he would like to see as a consequence of the budget cap is a relaxing of the technical regulations.

He argues that the rules do not need to be so prescriptive if teams’ spending is already limited by a mandated cost ceiling, and that freeing them up would drive innovation.

“I don’t know why the regulations have to be as tight as they are,” Brown said.

“If you’ve got a cost cap, then there should be some more technical freedom, because you’re governed.

“And if you’ve got the cap kind you’ve got two governors – ‘everything has to look exactly like that and you can’t spend more than that’. Stop (the policing) with the spend and do what you want (with the cars).”

He said, with both limits in place, innovation in F1 was “at risk”.