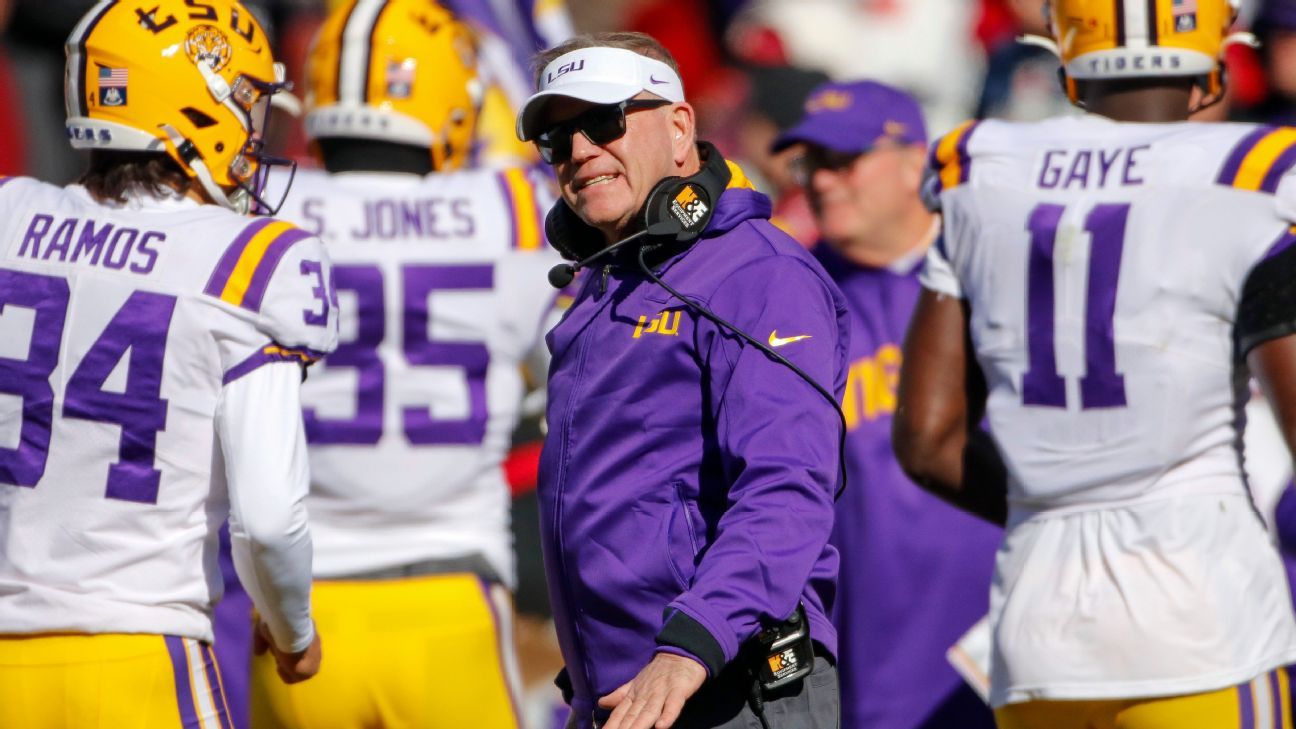 After overcoming tough games against unranked opponents, the top four teams in the College Football Playoff rankings remained the same Tuesday night, while LSU stayed one spot ahead of USC at No. 5.

Georgia led off the CFP selection committee’s rankings for the third straight week, followed by Ohio State at No. 2, Michigan at No. 3 and TCU at No. 4. The Buckeyes and Wolverines, who play this coming Saturday in Columbus, both trailed in the second half last week before keeping their undefeated records intact. Michigan and TCU both needed go-ahead field goals in the final minute to hold off Illinois and Baylor, respectively.

USC’s dramatic road win over crosstown rival UCLA wasn’t enough to leapfrog two-loss LSU, which beat UAB 41-10 at Tiger Stadium. Lincoln Riley’s team appeared at No. 5 in both the AP and coaches’ polls Sunday, USC’s first AP top-five ranking since September 2017. The Trojans’ only loss came by one point on the road against Utah, which fell to No. 14 after its loss at Oregon.

Tennessee, which occupied the No. 5 spot last week, fell to No. 10 after its 63-38 road loss to South Carolina.

LSU finishes the regular season at Texas A&M before facing Georgia in the SEC championship game. USC this week hosts Notre Dame, which moved up three spots to No. 15 in the selection committee’s rankings. The Trojans’ Pac-12 championship opponent will be determined this coming weekend. Oregon, which moved up three spots to No. 9 after the Utah win, can clinch a spot in Las Vegas by beating No. 21 Oregon State on the road.

An Oregon loss this week would open the door for No. 13 Washington and Utah to reach the Pac-12 championship.

Alabama and Clemson both moved up a spot in the rankings to No. 7 and No. 8. Clemson will host an unranked South Carolina team Saturday but has wins over Florida State, which moved up three spots to No. 16, and Louisville, which entered the rankings at No. 25. Clemson is set for an ACC championship matchup with North Carolina, which fell only four spots to No. 17 after losing to a 4-6 Georgia Tech team at home this past Saturday.

“You’re looking for football judgement, and that game against Notre Dame … that continues to be part of the discussion,” Corrigan said of the Tigers’ 35-14 loss to the Irish. “Overall, we saw at Alabama at seven, and Clemson at eight.”

TCU, which hosts Iowa State on Saturday, will face either No. 12 Kansas State or No. 23 Texas in next week’s Big 12 championship game. Kansas State, which moved up three spots in the Tuesday rankings, can clinch a spot by beating Kansas. If Kansas State falls, Texas would go if it beats Baylor.

“We go through the same thing every week,” Corrigan said. “TCU has done a really good job in finding ways to win games.”

Tulane is once again the highest-ranked Group of 5 team at No. 19, following its home win over SMU and UCF’s home loss to Navy. The Green Wave on Friday visit No. 24 Cincinnati, and the winner will host the American Athletic Conference title game next week. The Tulane-Cincinnati winner could face a rematch in the championship, but No. 22 UCF and Houston also could reach the game.