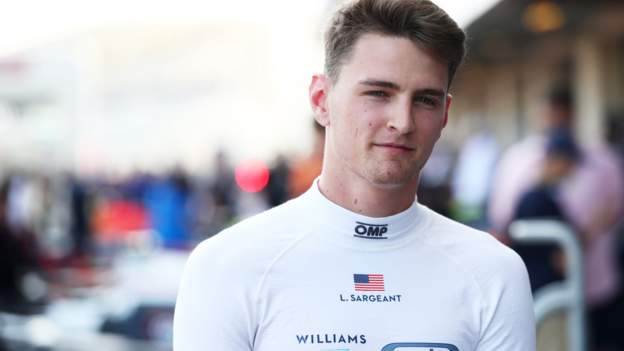 Logan Sargeant says he does not feel any weight of expectation as a result of being the first American to have a full-time Formula 1 seat for 16 years.

He was officially named as a Williams driver on Monday and will partner British-born Thai Alex Albon in 2023.

Sargeant, 21, said: “I have prepared the best I can to be the best driver I can possibly be.

“Hopefully I can represent them well and make them proud, but I don’t feel it’s any extra pressure.”

Sargeant will be the first American driver to have a full-time F1 race seat since Scott Speed at Toro Rosso in 2006-7.

Alexander Rossi drove five races for the now-defunct Manor Marussia team in the closing stages of 2015.

Before Speed, the last American in F1 was Michael Andretti, who did most of the 1993 championship for McLaren alongside Ayrton Senna before being dropped three races before the end of the season.

F1 has long wanted a successful American driver to consolidate its place in the world’s biggest market.

The sport has seen significant growth in the US in recent years, much of it attributed to the success of the Netflix series Drive to Survive, and Sargeant’s debut is likely to generate significant interest.

Asked whether being an American was a factor in his being chosen by the team, Sargeant said: “I like to think it is a happy coincidence. I put in the hard work over the past however many years, made the commitment to move to Europe when I was young to make this dream a reality.

“I feel like I’ve had a very good junior formula career. And (I’m) just looking to closing that chapter and move on to what’s next.”

Williams announced last month that Sargeant, a member of their junior driver programme, would win the seat as long as he secured an F1 licence.

He did that by finishing fourth in the Formula 2 Championship, which concluded at last weekend’s Abu Dhabi Grand Prix.

He graduates to F1 after a single full season in F2 but said he believed he was ready for the move.

“I feel like I’ve had a good three or four months of build-up knowing it’s a possibility,” he said.

“I don’t feel it’s too quick, I feel it’s about right and I am super-excited to get going.”

And he said a handful of outings for Williams in practice sessions this season had “given me the best chance to get out of my comfort zone and improve the most”.

He described Williams’ decision to sign him and “a huge honour and a dream come true”.

Williams team principal and chief executive officer Jost Capito said: “He’s had a strong rookie season in Formula 2, and we are excited to watch him make the step up in Formula 1. We are here to support that journey with him.”

HIA ‘discrepancies’ saw White play on in Dublin
Sources: Tigers reunite with Boyd to bolster staff
Follow live: Belgium, Croatia meet with World Cup hopes on the line
A guide to LSU-Georgia, Kansas State-TCU and the rest of the conference title games
Hot stove survey: Where will deGrom and Judge sign? Who will get traded?