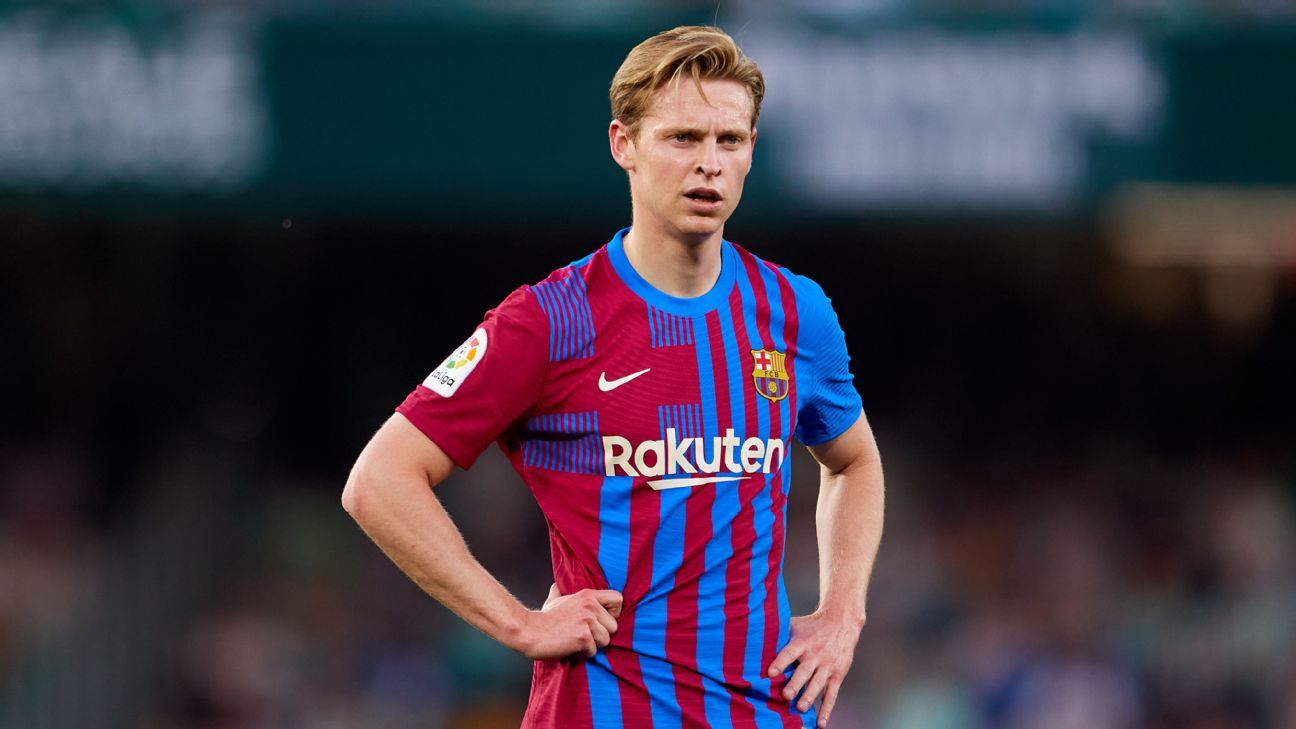 Think the Frenkie de Jong saga is over at Man United? Think again. ESPN’s Insider Notebook has the latest.

Despite strong interest from United, De Jong remained at Barcelona during the transfer window, saying he never wanted to leave the Spanish giants. But sources told ESPN that United manager Erik ten Hag isn’t put off by the 25-year-old’s public stance and won’t rule out the possibility of making another bid next summer. There is still a feeling at Old Trafford that De Jong could leave Barcelona in the future and he could be convinced to move to Manchester where he’d reunite with his former Ajax manager Ten Hag.

United agreed the framework of a deal with Barcelona in the summer but negotiations stalled over United’s reluctance to cover deferred wages owed to De Jong.

– Insight: Where should Bellingham go?

“I always wanted to stay at Barcelona and this is why I always remained calm in the summer,” he said. “I can’t give too much details away. The club has it’s own ideas and I have my own ideas too. And sometimes this clashes with each other. But at the end of the day things went OK.”

Bellingham is set to be one of the most sought after players in Europe next summer, and Dortmund are likely to demand a huge transfer fee for the England international, whose contract runs out in 2025. The 19-year-old, fourth on ESPN’s 39 under-21 list of stars back in April, is enjoying a fine start to the season and is expected to play a key role for Engand at the World Cup in Qatar.

Sources at United added there is an acceptance they will face stern competition from Manchester City, Liverpool and Real Madrid but they will be in the queue for his signature, having registered their interest in him during his time at Championship side Birmingham. Bellingham rejected offers from a range of Premier League clubs in 2020, eventually signing for Dortmund in a £22.5 million deal — a world record fee for a 17-year-old.

United are not planning a major revamp of their squad in January and will instead wait until the summer to make further changes to the squad. The club recently announced a net loss of £115.5m for 2021-22 and an increase in net debt of £94.5m, with no major arrivals likely in the January window. — Rob Dawson

Barcelona will move ahead with plans to wear white away from Camp Nou next season in a decision that has created plenty of debate inside the club. The colour is strongly connected to Real Madrid, especially in Spain, and there are people at the club who would prefer to avoid wearing the same shade as their Clasico rivals.

However, the decision was pushed through by the board earlier this year following surveys and reports which suggested a white Barca shirt would sell very well.

Barca first sounded out the possibility of wearing white last year when it was leaked that one of this season’s change strips would be white. In the end, a grey jersey with a red and blue cross was selected but the reaction among fans to the idea of a white kit was deemed positive enough, along with the surveys, to introduce a white shirt for the 2023-24 campaign. — Sam Marsden and Moises Llorens

Frank Leboeuf says he was “disappointed” with Chelsea’s performance in their 1-1 draw vs. FC Salzburg.

Graham Potter has not closed the door on Romelu Lukaku reviving his career at Chelsea and is expected to hold talks with the forward at the end of the season, sources told ESPN.

Lukaku fell out of favour under Potter’s predecessor Thomas Tuchel and returned to Inter Milan on loan just a year after making a €115m move from the Serie A side to Stamford Bridge. Sources suggested the 29-year-old is very keen on staying at Inter on a permanent basis but there is no option or obligation to sign as part of the existing loan agreement.

Potter is said to be open to discussing the situation with Lukaku if he has any interest in doing so, or should Inter decide not to pursue a permanent deal; they have significant financial issues and it remains to be seen whether they could afford Chelsea’s valuation.

Lukaku had previously thrived playing with a strike partner in Lautaro Martinez at Inter and Potter’s preferred 3-5-2 system would at least give him the option of playing alongside another forward.

Lukaku is under contract at Chelsea until 2026 and so a second loan at Inter would theoretically also be possible but the player’s transfer value would further depreciate given he turns 30 in May next year. A permanent solution one way or the other would be preferable to all parties with Chelsea expected to be aggressive in the transfer market once again in January and beyond. — James Olley

Cristiano Ronaldo will be leading Portugal‘s attempts to win the World Cup when Qatar 2022 kicks off in two months’ time, but in a sign of the Manchester United forward’s diminishing status on the pitch, sources told ESPN he won’t be one of 32 stars honoured with a huge presence in Doha during the tournament.

World Cup organisers in Qatar are in the process of dressing the many skyscrapers in downtown Doha with 75ft images of some of the players expected to impress for their national teams in November and December. But sources said Ronaldo, the all-time leading international goalscorer with 117 goals, is not part of the plans to have his image adorning a Doha skyscraper, with Portugal expected to be represented by one of the younger members of Fernando Santos’ team.

While negotiations are still ongoing with representatives and national associations over the image rights of some players, sources said Neymar is likely to be the face of Brazil in downtown Doha. The Paris Saint-Germain forward would join players including Harry Kane (England), Luis Suarez (Uruguay), Luka Modric (Croatia), Sadio Mane (Senegal), Alphonso Davies (Canada) and Qatar captain Hassan Al-Haydos, whose images already dominate the city skyline with their skyscraper posters.

Ronaldo may not be the only superstar name to miss out on the honour of being chosen for a poster. Argentina‘s player has yet to be unveiled, so Ronaldo and Lionel Messi may end up in the unusual position of having to look up at teammates and rivals. — Mark Ogden

Could the Premier League be reduced to 18 teams? That’s the scenario English football faces amid UEFA’s plan to expand European football from 2024 onwards, unless there’s a major overhaul of domestic cup competitions.

ESPN has seen the match calendar for the 2024-25 season onwards, with Europe’s major competitions set to expand not only in size, but also in duration. The Champions League (UCL), Europa League (UEL) and Europa Conference League (UECL) will all be increased from 32 teams to 36, with clubs in the UCL and the UEL playing two additional matches. UEFA is also increasing the footprint of European football further, spreading matches across 10 weeks rather than six.

English football is therefore faced with no choice but to revamp its cup competitions, sources told ESPN, or face the last resort of having to cut the Premier League from 20 teams to 18 — as seen in France. Ligue 1 is in the process of doing just that, relegating four teams and promoting only two this season.

Like the Premier League, both LaLiga and Serie A will continue with 20 teams for now (the Bundesliga has always operated with 18) but English football is the only top league in Europe with the added pressure of a secondary cup competition. France scrapped the Coupe de la Ligue in 2020 partly to ease workload among players.

English football faces a fixture quandary, with UEFA’s new programme planting two rounds of fixtures on dates used for the EFL Cup, known as the Carabao Cup. The first Europa League games are set to be played when the third round of the Carabao is held on the week of Sept. 24 and the final round of the Europa Conference League group stage clashes with the Carabao Cup quarterfinals on Dec. 18.

The effect in January is more acute. The second leg of the Carabao semifinals (Jan. 21) and a full round of Premier League midweek games (Jan. 28) will be wiped out by the final two rounds of the UEL and UECL. Something, therefore, needs to give.

The only viable solution to prevent further pressure elsewhere in the calendar would appear to be cancelling FA Cup replays from the third round onwards, which opens up two midweeks in January and February which the Carabao Cup semi and the round of Premier League games can be brought forward into.

That doesn’t solve all the issues, however. Teams in the UEL and UECL still have those Carabao Cup dates blocked, while there is the extra pressure of eight group games for clubs in the UCL and UEL. Playing under-21 teams, as Liverpool did in 2019 when their Club World Cup commitments clashed with the Carabao Cup, would appear to be the most viable solution but that would only devalue the competition further.

Manchester City are hoping to increase the capacity of the Etihad Stadium to 60,000 to allow them to host Champions League finals, sources told ESPN. City’s stadium holds 55,000 but plans are in place to add another 5,000 supporters. Reaching 60,000 would make the Etihad eligible to host UEFA finals in line with the European governing body’s guidelines.

Sources told ESPN planning permission to extend the North Stand is already in place. It’s the only remaining stand with two tiers after work on the South Stand and the stands behind both goals. The expansion, completed in 2015, added 6,000 seats and increased the capacity to more than 53,000.

City have played at the Etihad since 2003 after moving from Maine Road. It was initially built for the 2002 Commonwealth Games in Manchester, with a capacity of 38,000. — Rob Dawson

Valencia and Osasuna will be hit in the pocket if they field Nico Gonzalez or Abde Ezzalzouli in matches against Barcelona this season.

Barca sent Nico and Abde on loan to Valencia and Osasuna respectively in the summer but included a clause to deter both sides from using the players when they face Xavi Hernandez’s side. If Valencia use Nico or Osasuna pick Abde when they meet Barca, they will have to pay an additional charge on top of what they have already agreed in terms of the loan fee and salary contribution.

It represents a change in stance from Barca, who historically have not included such clauses — known as the “fear clause” in Spain — or prevented loaned players from playing against them. — Sam Marsden and Moises Llorens