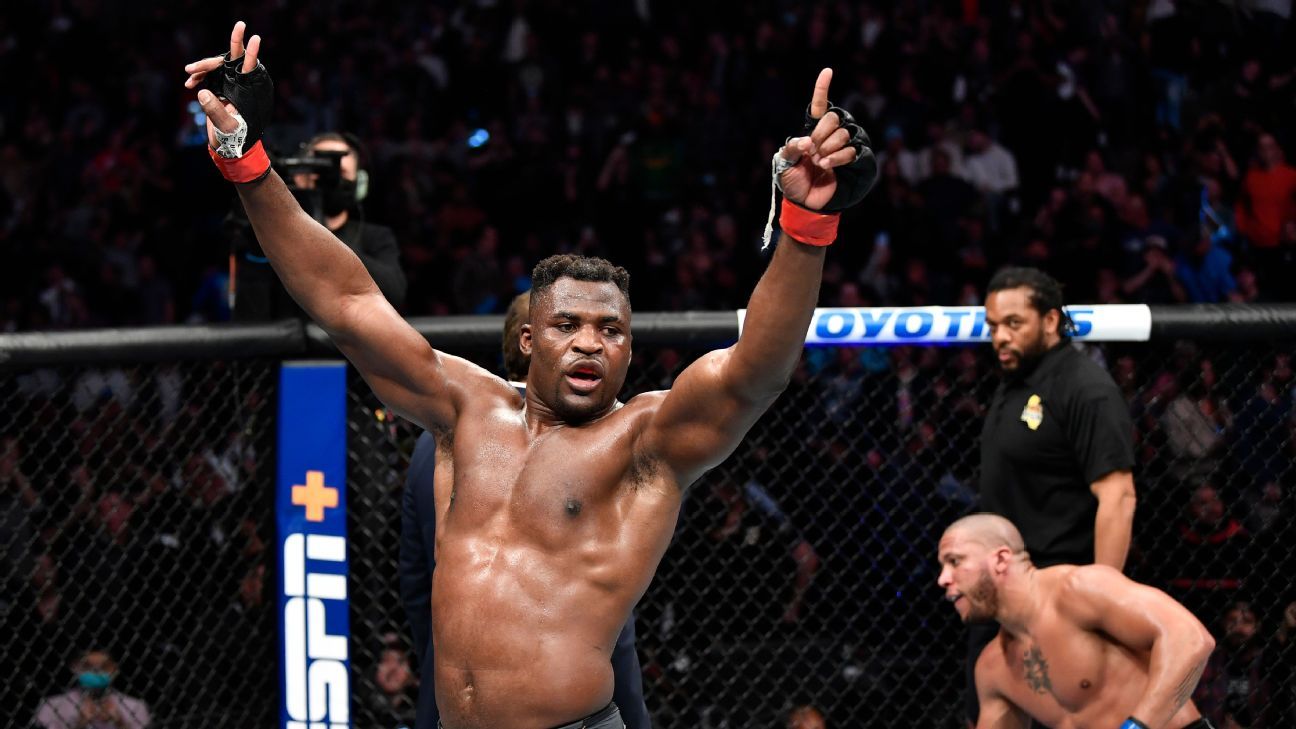 Francis Ngannou has built a championship fighting career by unleashing blows with earth-shattering impact. Prior to Saturday night, the UFC heavyweight champion had finished his five most recent fights by knockout, three in less than a minute.

Ngannou’s UFC 270 main event in Anaheim, California, ended with challenger Ciryl Gane horizontal on the canvas too. But Ngannou employed a whole different way of putting him there, using four takedowns to seize control in a fight he was losing and earn a unanimous decision in his first title defense. For Ngannou, it was his first career victory by decision.

This was not the Ngannou we’ve come to expect. Trading the fast and furious for patient and persistent, the champ unveiled an evolved fighter who’ll be fascinating to watch in UFC title defenses to come. 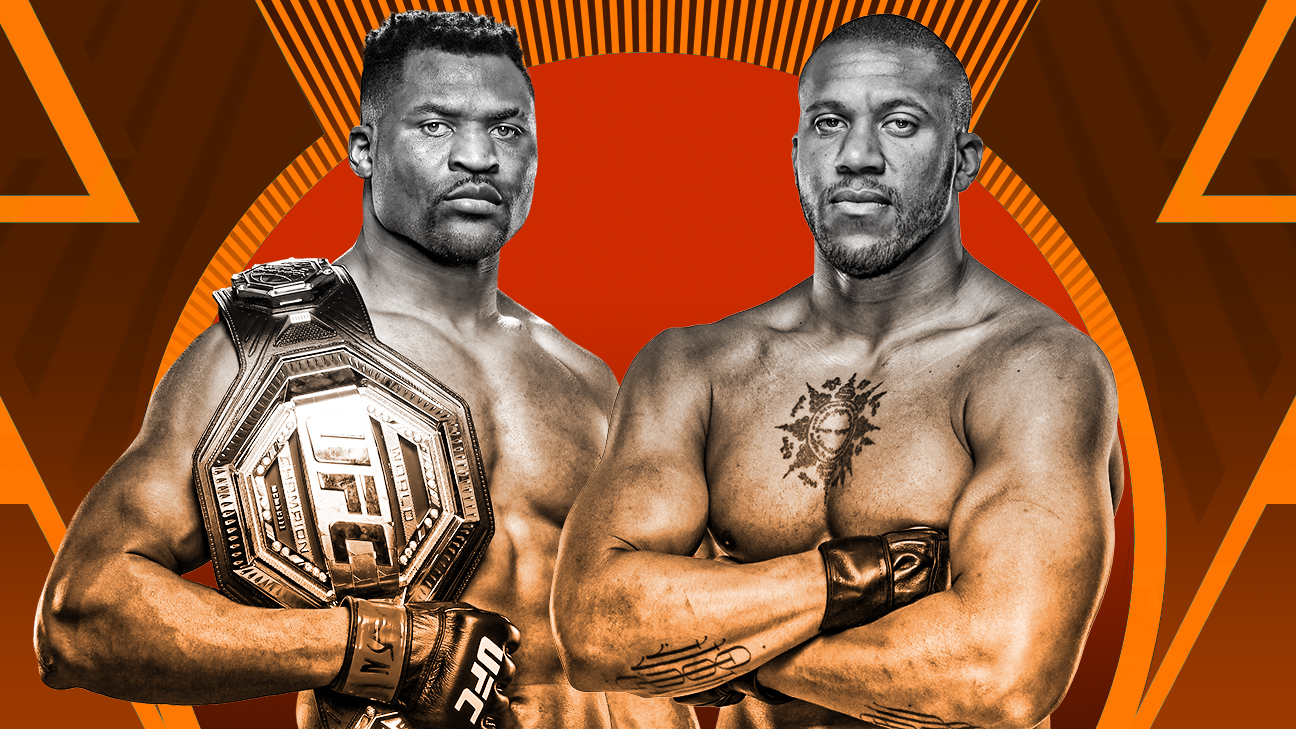 If the pay-per-view is purchased, all fights from UFC 270: Ngannou vs. Gane will be available to watch on ESPN+.

Watch the complete card on ESPN+

But will there be UFC defenses to come?

Saturday’s victory came in the final bout of Ngannou’s seven-fight contract, but what’s commonly referred to as a champion’s clause ties him to the UFC for three more fights or one year. Ngannou let it be known last week that he will choose Option B, telling ESPN he will not compete again for the UFC under his current deal.

Ngannou is now in position to try to deliver one of his old-fashioned thumpings. This one, however, would occur outside the Octagon. If he follows through with his insistence that he will sit out a year to free himself from his contractual obligation to the UFC, Ngannou would be delivering a knock-the-wind-out-of-you gut punch to MMA’s leading promotion.

When he spoke to my cohort Brett Okamoto, Ngannou sounded disillusioned as he gave a status report on his balky contract negotiations, going so far as to say, “I don’t feel like I have a promoter anymore.” With Dana White not putting the belt around Ngannou following his title defense, and then not showing up for the post-UFC 270 news conference, it could be an indicator of the UFC president’s current thoughts on the matter.

Hearing Ngannou’s sentiments on the state of his relationship with the UFC has to make hearts beat a little faster in the chests of other MMA promoters. If Ngannou cannot work things out with the UFC, he would be the most sought-after free agent the sport has ever seen in one year’s time.

Notwithstanding the grappling and measured stalking he put on display Saturday night, Ngannou (17-3) has shown himself throughout his career to be peak Mike Tyson in 5-ounce gloves. Ngannou has 12 knockouts and 11 first-round finishes, and prior to this weekend, he had been ramping up his explosiveness. Although Stipe Miocic made it as far as the first minute of Round 2 on the night in March when he got KO’d for the belt, Ngannou knocked out his four prior most recent opponents in 45, 26, 71 and 20 seconds. Two of those demolitions came against former UFC champions.

The win over Gane, a former training partner for a brief time in the Paris gym where both fighters began their MMA journeys, did not come easily. Ngannou revealed afterward that he had torn an MCL and injured an ACL while training for the fight. That plus the smooth movement and striking of Gane turned this into a longer night’s work for the champ than usual.

Francis Ngannou discusses the extent of the knee injury he suffered three weeks prior to his fight against Ciryl Gane.

Nonetheless, Ngannou still emerged as the baddest man on the planet.

That’s a designation typically reserved for the heavyweight champion of the world, and for over a decade, it has been singularly associated with the belt holder in the UFC, not any other MMA promotion. This is the way the sport’s pecking order goes not just at heavyweight but across the spectrum of weight classes. But heavyweight is the most storied division in all of combat sports, and so losing Ngannou would not be a good look for the UFC.

For Ngannou, the UFC is the place to be if he is looking for the biggest challenges in MMA. That’s where the best heavyweights are. The champ has broader ambitions, though. He wants to pursue his original combat sports dream of competing in a boxing ring. Ngannou has engaged in a social media back-and-forth with boxing champion Tyson Fury and has his eye on that big (and big-money) challenge.

Is that the sticking point between fighter and promotion? To this point, with Ngannou and its other fighters, the UFC has had the right to sign off — or not — on any detours away from the Octagon. Conor McGregor boxing Floyd Mayweather was a big money maker for all involved, including the UFC. But anyone on the roster hoping to step into a squared circle with Jake Paul is a no-go.

How do Dana White & Co. feel about the possibility of seeing their heavyweight champion stepping in with the best heavyweight boxer in the world? It could deliver a heavy load of cash into the coffers, but what impact might a loss in a boxing match have on the UFC champ’s perceived stature as the baddest man on the planet?

There are many unknowns in Ngannou’s near future, including potential surgery for his ACL and MCL injuries. But one thing we know is this: He has leverage. That, in itself, is unprecedented in the UFC’s dealings with a champion. Typically, the company re-signs its champs before they step into the Octagon for their final contracted fight. You have to go back 25 years, to when Randy Couture won the UFC heavyweight title and left to fight in Japan, to find an even remotely comparable circumstance.

But that was a different century and a different MMA universe. In the modern era, with contracts structured the way they are, the UFC has never seen one of its reigning champions walk away to fight elsewhere. White has never failed to get a deal done. On that front, he has an unbeaten streak that would make Khabib Nurmagomedov proud.

Even coming off a relatively tame Ngannou performance, it seems unfathomable that the UFC would allow some other promotion to get its hands on this big, bad heavyweight champ. But after watching Ngannou — forever a thunder-fisted front-runner — turn into a grappler and a comeback kid, anything seems possible.