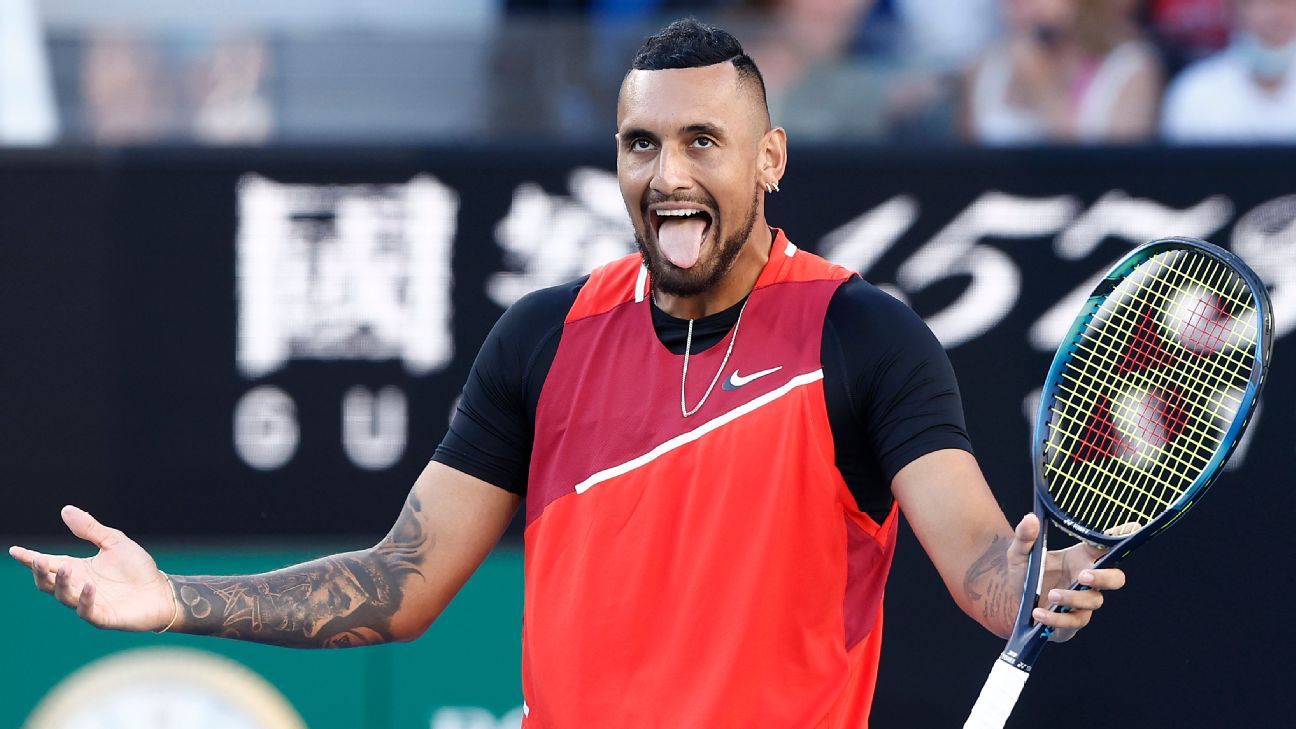 “He’s a disgrace to the game,” he once argued. “The man is destroying golf. Kick him off the tour.”

Gilmore, the flamboyant, failed hockey player turned unorthodox golf pro, a fictional character wonderfully portrayed by Adam Sandler in the 1996 film, was a polarizing figure, to say the least. Gilmore could entertain crowds like nobody else, doing things with a golf club that others wouldn’t dare dream of, but his aggressiveness and short fuse often landed him in hot water.

The similarities between Gilmore and Australian tennis bad boy Nick Kyrgios have always been on display. There’s the trademark shot nobody else would dare attempt; for Gilmore it was the running start, booming drive off the tee, while for Kyrgios, it’s his audacious, and often humiliating, underarm serve.

There’s the intense rivalry with the sport’s best player. Like Gilmore and McGavin, Kyrgios and world No. 1 Novak Djokovic have often been critical of each other’s behavior, clashing at various stages over the years. Last year Kyrgios labeled the 20-time Slam champion a “tool” and “a very strange cat,” to which Djokovic replied “I don’t have much respect for him.”

Gilmore and Kyrgios even share the same blasé attitude toward their respective sports. The 26-year-old from Canberra has referred to tennis as a “part-time job” on numerous occasions and has far more interest in other sports, most notably basketball. Gilmore once claimed “golf requires goofy pants and a fat a–” and only reluctantly began playing as a way to make quick cash and save his grandmother’s home.

The parallels between the two sporting icons have become even more blatant through the first week of the 2022 Australian Open.

Kyrgios lasted just two rounds and seven sets in singles, yet he managed to cause as much of a stir in the past week as any tennis player on the planet not named Djokovic. And just like McGavin with Gilmore, a host of Kyrgios’ rivals have been critical of him and the behavior of the crowds he attracts.

“It’s the first time I’ve walked onto a tennis court and been booed,” Kyrgios’ first-round opponent, Liam Broady, said after bowing out of the tournament on Day 2. “He is incredible at getting them behind him, and he plays better for it. It’s all very rare in the sport of tennis.”

Seconds after eliminating Broady on John Cain Arena, Kyrgios helped himself to a fan’s pint of beer. And yes, Gilmore accomplished that feat no more than 26 years ago.

Two days later, after winning one of the points of the tournament against world No. 2 and Australian Open favorite Daniil Medvedev, Kyrgios was circling the edge of Rod Laver Arena hyping the crowd. It was a scene eerily reminiscent of Gilmore parading around on the green with a golf club between his legs.

“Nick, well, he’s a big entertainer,” Medvedev told Eurosport following their match. “But on break point [and] second serves people are cheering like you already made a double fault. That’s just disappointing. Those who are doing it probably have a low IQ.”

It really doesn’t matter which court Kyrgios plays on, you’re almost guaranteed a rowdy crowd who will lap up his showmanship and create their own shenanigans in the stands. This week we’ve already witnessed shoeys, Mexican waves and the ever-persisting Cristiano Ronaldo “Siuuu!” chant. It’s all eerily reminiscent of Gilmore’s raucous, beer-sculling fans McGavin advises to “go back to your shanties.”

One of the most memorable scenes of the film is when Gilmore and game show host Bob Barker begin throwing punches at a charity golf tournament. According to Kyrgios, something similar nearly happened after he and doubles partner Thanasi Kokkinakis defeated the world’s top-ranked pair, Nikola Mektic and Mate Pavic.

“Just letting you know after yesterday’s chop fest in doubles, my opponents coach and trainer proceeded to threaten to fight in the players gym,” Kyrgios tweeted. “Tennis is a soft, soft sport.”

There has always been plenty of angst surrounding Kyrgios, from not just his opponents, but also tennis fans and the media. But this is nothing new and, so long as he remains in the sport, his unique brand of tennis isn’t going to change.

As fictional tour boss Doug Thompson reminded McGavin about Gilmore, “he hasn’t broken any rules. Ratings are up and we’re attracting new and youthful sponsors. There’s nothing I can do.”

It’s the same with Kyrgios. You can count on one hand how many tennis players move the needle, so to speak. With the likes of Roger Federer, Serena Williams and Rafael Nadal all firmly in the twilight of their illustrious careers, the sport is desperate for another draw. Kyrgios might just be it.

According to Media Week, the highest-rated non-news program this week in Australia was Kyrgios’ second-round match against Medvedev on Thursday evening. World No. 1 and fellow Australian Ash Barty hasn’t been close in any of her matches to date; neither has top-ranked local male Alex de Minaur. Even his doubles matches have more fans in attendance than the fourth-round singles action taking place less than 100 yards away. Kyrgios knows it, too.

“I saw the TV ratings up 45%, mate. Let’s just get this clear,” Kyrgios quipped after he and Kokkinakis’ third-round doubles win. “We need this for the sport.”

Just like Gilmore in Dennis Dugan’s cult film, Kyrgios isn’t everyone’s cup of tea and he likely never will be. But he’s an entertainer. A showman, first and foremost, who has the skill to compete with the world’s best players on the grandest stages.

“Tennis has done a really poor job with accepting personalities,” he said. “They’ve really only marketed three players for the last decade, and now it’s caught up to them. But people go about it differently, and I think tennis needs to embrace that more. Look at the match between me and Medvedev — you couldn’t have two more polar opposite personalities going up against each other, and it was fun. Tennis needs to just push that, a lot, or it’s in trouble.”

Why we might have to wait until 2024 to see Artur Beterbiev vs. Dmitry Bivol in a must-see matchup
Ingram nets 13 in long-awaited return for Pels
CEO Phillips resigns after WRU allegations
Watch: Rahul Dravid Sends ‘Special Message’ To India’s U19 T20 World Cup-Winning Women’s Cricket Team
‘You only fight him because you have to’: Why nobody wants to get into the ring with light heavyweight champion Artur Beterbiev