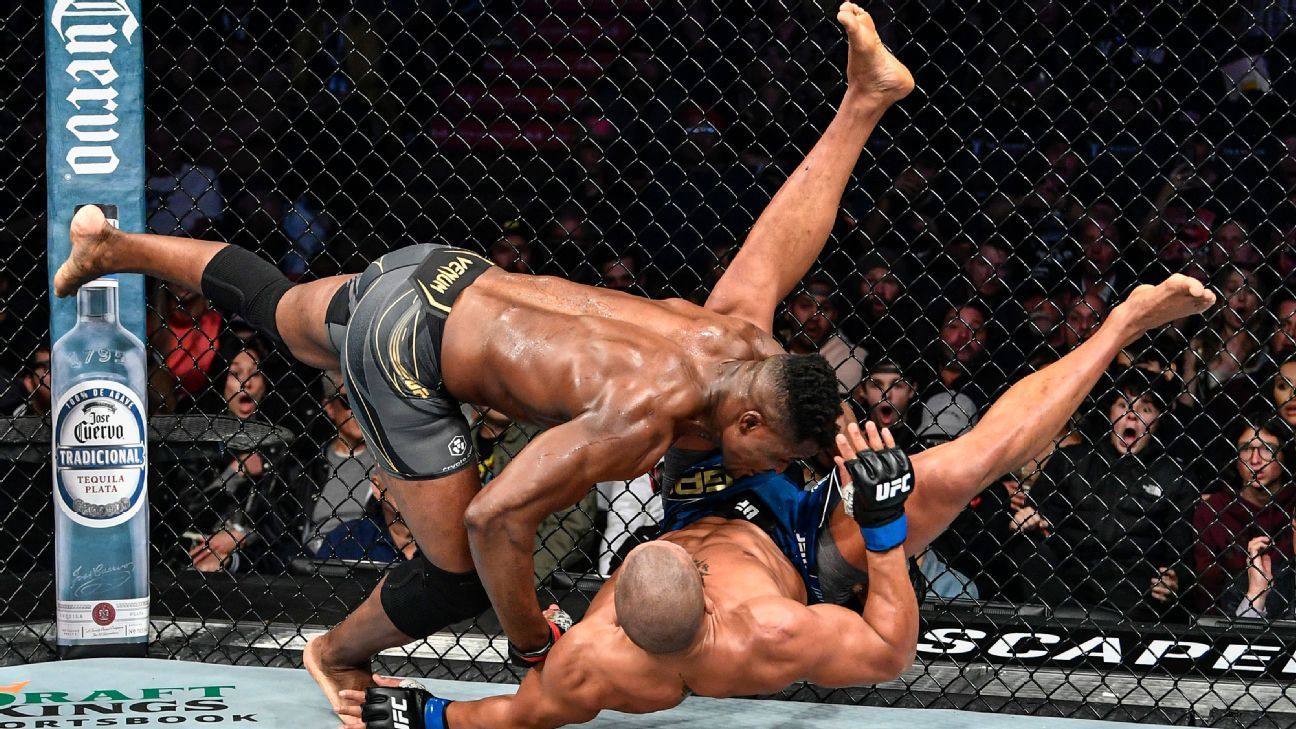 ANAHEIM, Calif. — Francis Ngannou is the most frightening power puncher in UFC history. But he reminded everyone Saturday night that he is not only that. Ngannou showed off a well-rounded game — and immeasurable heart — befitting the champion he is.

Down on the cards early, the hardest-hitting man maybe ever in MMA went to his wrestling and Brazilian jiu-jitsu to gut out a unanimous decision (48-47, 48-47, 49-46) win over Ciryl Gane in the main event of UFC 270 here at Honda Center. With the victory, Ngannou unifies the UFC undisputed heavyweight title. Gane came in as the interim champ.

“My ground game is evolving,” Ngannou said in his postfight interview.

The fight had a rich back story, outside of the high stakes. Ngannou and Gane were sparring partners at MMA Factory until Ngannou had a public falling out with their coach, Fernand Lopez. The two overlapped on and off at the Paris gym from 2017 to 2019, when Ngannou moved his training permanently to Las Vegas. Lopez was in Gane’s corner.

Ngannou and Lopez have feuded over money and recognition. Ngannou believes Lopez has taken too much credit for his success, while Lopez thinks Ngannou has stopped acknowledging MMA Factory as a key cog in his development.

Afterward, Ngannou said he tore his MCL ahead of Saturday’s bout, but could not see himself withdrawing because he wanted to “remind people I’m the champ.”

That includes his contract situation and acrimonious relationship with the UFC. Ngannou has indicated that he plans on venturing into the boxing world at some point. Ngannou has said he does not plan on competing again under this current deal.

If Ngannou lost Saturday, he would have become a free agent. With the win, he is still under UFC contract due to a champion’s clause. Ngannou said he could sit out an entire year until that expires.

“Boxing is always in the back of my pocket,” Ngannou said in the Octagon after the fight. “It is something I must do toward the end of my career. … It’s not like I have a lifetime here.”

Ngannou (17-3) knocked out Stipe Miocic to win the UFC heavyweight title at UFC 260 last March. The Cameroon native has won six straight, all of them by KO/TKO prior to tonight. The 6-foot-4 Ngannou, 35, is considered one of the most frightening punchers in MMA history, estimated as the same force of getting hit by a small car.

Gane (10-1) won the interim heavyweight title by stopping Derrick Lewis via third-round TKO at UFC 265 back in August. The France native was a perfect 7-0 in the UFC coming in. Gane, 31, is a former Muay Thai star and TKO heavyweight champion in MMA.

“I’m disappointed,” Gane said. “I’m a little bit sad. But it’s a good experience. I think I’ve just arrived in this game. The future is ahead of me.”