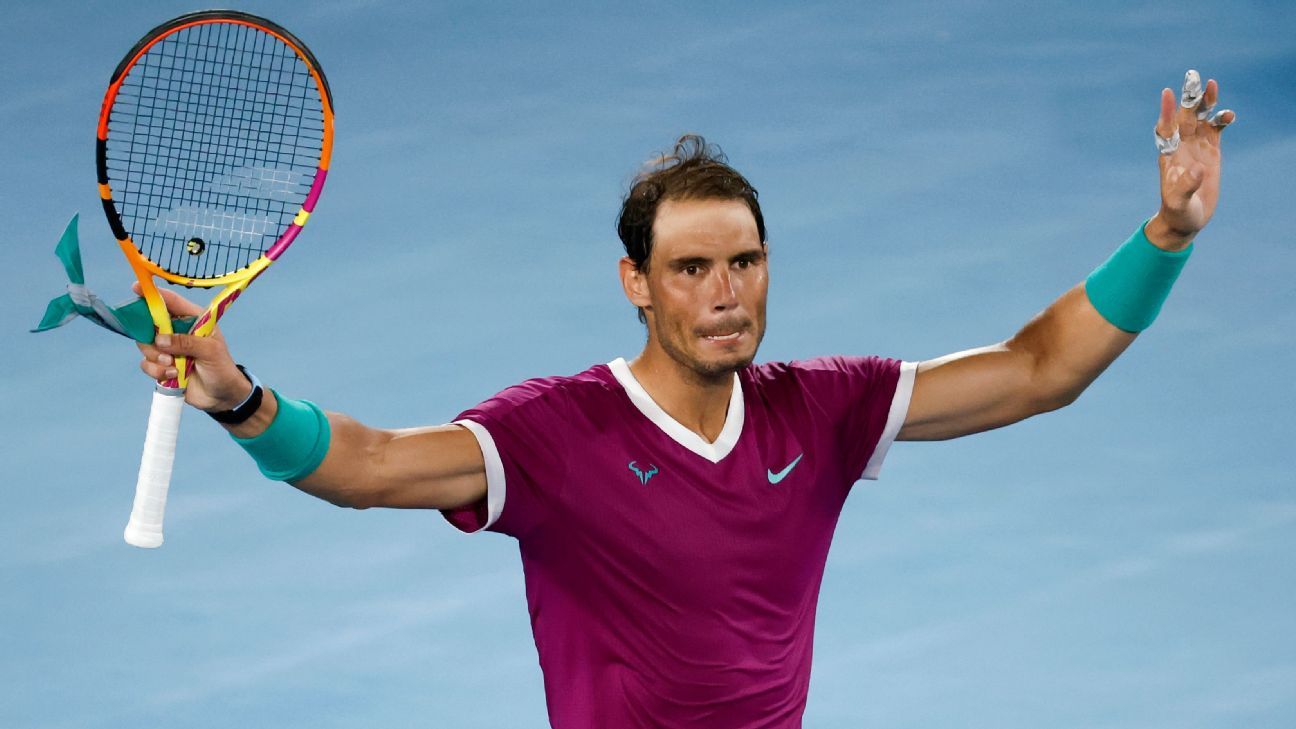 MELBOURNE, Australia — After fending off four set points and being unable to convert the first six of his own, Rafael Nadal finally clinched a 28-minute and 40-second tiebreaker to get himself on course to secure a spot in the Australian Open quarterfinals for the 14th time.

And now, after a 7-6 (14), 6-2, 6-2 fourth-round victory over fellow left-hander Adrian Mannarino on Sunday, Nadal is potentially just three wins away from a men’s record 21st Grand Slam singles title.

“First set [was] very, very emotional,” Nadal said. “Anything could happen there. I was a little bit lucky at the end. I had chances, he had a lot of chances, too.”

Nadal will next play Denis Shapovalov, the 22-year-old Canadian who finished off a 6-3, 7-6 (5), 6-3 win over Olympic gold medalist Alexander Zverev on Margaret Court Arena less than an hour later to reach the last eight in Australia for the first time.

Nadal is now tied with John Newcombe in second spot on the all-time list for most quarterfinals in Australia, one behind Roger Federer‘s 15. It’s also Nadal’s 45th time into the last eight at a Grand Slam tournament, which is third on the all-time behind Federer (58) and Novak Djokovic (51).

He shares the men’s record of 20 major titles with Federer and Djokovic. But he’s the only one of the trio playing in this tournament.

Mannarino, who didn’t finish his third-round win until after 2 a.m. Saturday and appeared to be hampered at times by an abdominal or upper leg injury, threw everything at Nadal in the opening set on Rod Laver Arena, where temperatures approached 33 Celsius (91 F).

The first set lasted 85 minutes, including the ‘breaker, but after getting early breaks in the second and third sets the match was over in 2 hours, 40 minutes.

“I’m very happy I survived that first set, without a doubt,” Nadal said. “That crazy first set was so important.”

The No. 14-seeded Shapovalov spent almost 11 hours on court through the first three rounds, winning twice in four sets and once in five. He said he was surprised by the relative speed of his 2-hour, 21-minute win over Zverev.

“Probably the one I least expected to finish in three,” he said. “Definitely happy with where the game is at. I played pretty smart today.”

Shapovalov reached the quarterfinals at the U.S. Open in 2020 and was a semifinalist at Wimbledon last year, his career-best run to date at a major. He’ll have to step it up against one of the greatest in the game to again reach the final four.

“It’s always an honor to go up against a guy like Rafa,” Shapovalov said. “It’s always fun. Always going to be a battle against him.”