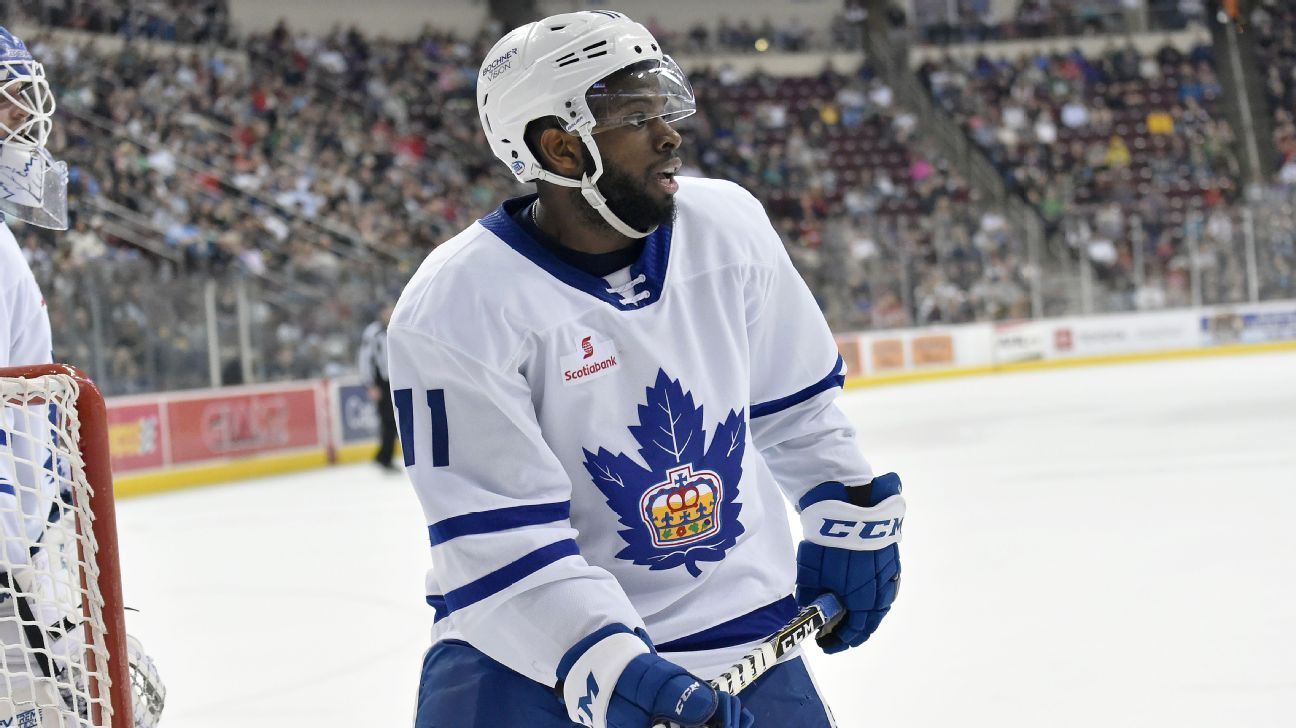 “The South Carolina Stingrays are disgusted and appalled by last night’s incident involving Jordan Subban,” Stingrays team president Rob Concannon said in a statement. “Our organization stands in support of our friend and teammate, Jordan, as well as all other players who continue to deal with racism and discrimination. This behavior is unacceptable and has to stop.”

The Jacksonville Icemen said in a statement that the organization is cooperating with the ECHL’s review of the incident.

“As an organization, our fans, partners and sponsors know our core values and intend to make comments and decisions after completion of league review,” the team said.

The game was in overtime when South Carolina’s Andrew Cherniwchan collided with Jacksonville goalie Justin Kapelmaster, sparking a skirmish between the teams. According to Subban, he tried to engage Panetta in a fight. Panetta responded by allegedly taunting Subban, who is Black.

“As soon as I began to turn my back, he started making monkey gestures at me, so I punched him in the face multiple times and he turtled like the coward he is,” Subban tweeted.

More like @JPanetta12 was too much of a coward to fight me and as soon as I began to turn my back he started making monkey gestures at me so I punched him in the face multiple times and he turtled like the coward he is. There fixed it 👍🏾 https://t.co/JtPqpN9wwE

The two fought while surrounded by players from both teams. They received major penalties and misconduct penalties that sent them to their locker rooms. Subban’s teammate Nico Blachman left the Stingrays bench to punch Panetta and was also given a game misconduct.

News of the incident spread quickly on Saturday night when New Jersey Devils defenseman P.K. Subban, who is Jordan’s older brother, shared video of Panetta’s taunt and called out the ECHL.

“They don’t call the East Coast League the ‘jungle’ because my brother and the other black players are the monkeys! Hey Jacob Panetta, you shouldn’t be so quick delete your Twitter or your Instagram account. You will probably be able to play again – that’s what history says,” P.K. Subban tweeted to his 1 million followers.

“But things are changing now. Not just the hockey world knows your true colors, your hometown of Belleville knows, your family, and friends know you’re a fraud,” wrote P.K. Subban. “With everything that has gone on in the past couple years in the world, I’ll say with all due respect to everyone who has an opinion, this isn’t a mistake. We all know what’s OK and what’s not. Even your own teammates wanted to see you get your clock cleaned. This happens a lot and it never gets exposed in the lower leagues.”

The incident occurred one day after the American Hockey League suspended San Jose Barracuda forward Krystof Hrabik for 30 games after he made a racist gesture toward Boko Imama of the Tucson Roadrunners in a Jan. 12 game. Hrabik, 22, imitated the movements of a monkey in a taunt that targeted Imama, who is Black.

Hrabik will have the option to take part in training with the NHL’s Player Inclusion Committee, for which P.K. Subban is listed as a co-chair, to reduce his suspension. He can apply to the AHL for reinstatement after missing 21 games, and a decision will be “based on an evaluation of his progress in the necessary education and training” with the Player Inclusion Committee.

Both incidents continue a trend of racist taunts in professional hockey. In 2021, Andrei Deniskin of the Ukrainian Hockey League pantomimed peeling and eating a banana toward Jalen Smereck, who is Black. Deniskin was suspended 13 games.

Smereck reacted to the Subban incident on Instagram, writing: “It’s the first month of 2022 and there has already been two racial gestures in the second and third highest leagues in North America. Just think about how many are happening at the youth level to young kids that we don’t see or ever know about, because the game isn’t being recorded.”

Aryna Sabalenka battles her way to first Grand Slam victory
The Celtics have been the one constant in LeBron’s career
Herbert, Detroit sandlot ace, ’62 All-Star dies
McIlroy leads by 3 ahead of final day in Dubai
Embiid: Surging Sixers ‘got a good chance’ in ’23