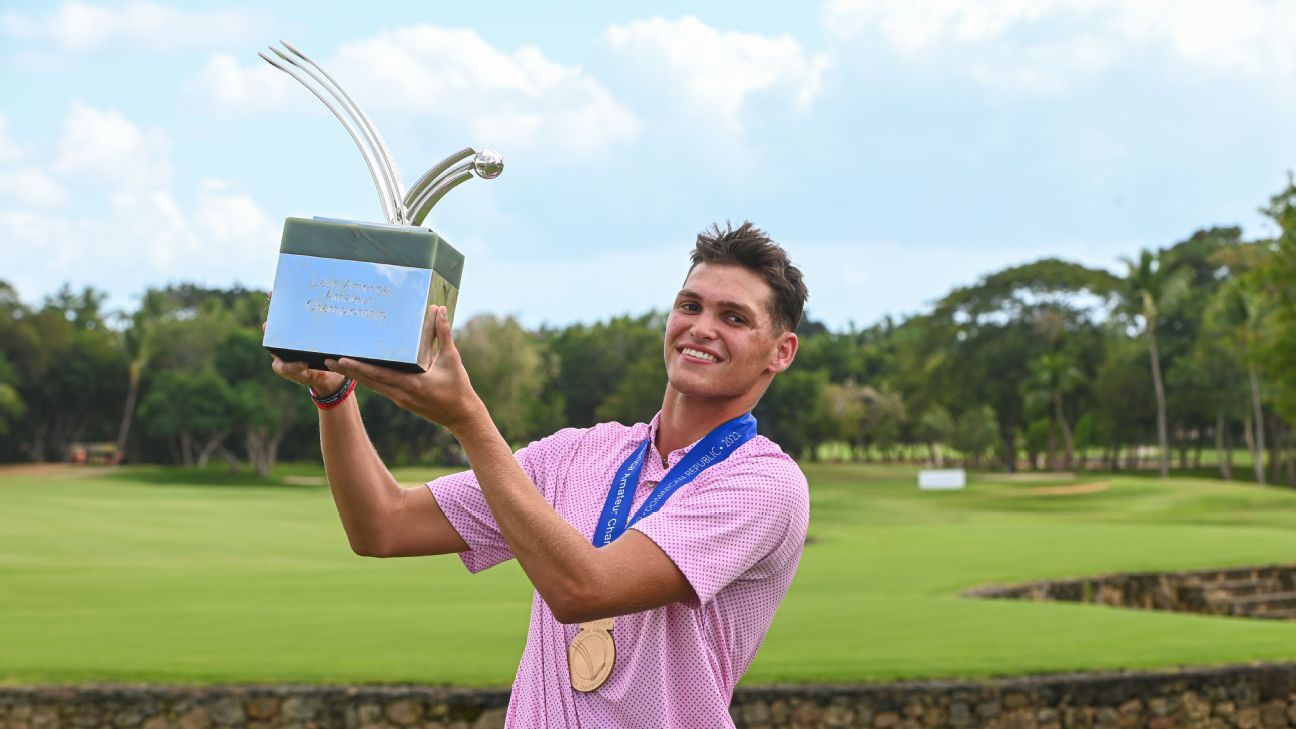 LA ROMANA, Dominican Republic — Standing on the edge of the 18th green, the Cayman Islands’ Aaron Jarvis had to hold his breath more than once.

His round over, Jarvis was participating in interviews as both Mexico’s Santiago De la Fuente del Valle and Argentina’s Mateo Fernandez de Oliveira missed birdie putts that would have tied him for the lead at 7 under. Next, Jarvis was fixated on the green as Brazil’s Fred Biondi and Argentina’s Vicente Marzilio both had birdie putts to get to 7 under, as well. All of those players were ranked higher than Jarvis, who entered this week 1,669th in the world. All of them missed. There would be no playoff. Jarvis had won the 2022 Latin America Amateur Championship.

Not just to the Masters, but The Open at St. Andrews and the U.S. Amateur, too.

Another official from Trinidad and Tobago went up to Jarvis and reminded him how far he had come.

“I still remember the 11 the last time you played here!” he said.

The official turned to Jarvis’ dad, Robin, and repeated himself, referencing Jarvis’ LAAC debut at Casa de Campo in 2019, where he carded an 11 on a hole and finished 50th.

As Jarvis ran his hands through his hair and said, “Oh my God,” his dad couldn’t believe it, either.

“Not even in my wildest dreams,” Robin Jarvis said.

Aaron Jarvis’ mother, Lana, who is a teacher, couldn’t get time off from work to attend the tournament, so Robin called her and narrated what Aaron was doing as he moved through the post-victory ceremonies.

“I knew I was better than my ranking,” Jarvis, a freshman at UNLV, said after his final-round 69. “I just didn’t play enough tournaments to boost my rankings. Hopefully now it’ll go up after this win.”

The 19-year-old’s journey to the podium began in 2013, when the Cayman Islands was given the opportunity to host the Caribbean Junior World Championships, even though it didn’t have a junior team. The region cast a wide net for athletes who were interested in golf, and Aaron’s brother, Andrew, made the team. At the time, Aaron was a soccer player for the Cayman Islands’ U-13 team, but his interest was piqued when his older brother picked up golf.

“He wanted to beat his brother,” Robin said. Andrew didn’t go pro, but he’s a 5-handicap now and his entry into golf sparked Aaron’s passion for it. As Aaron got older and had to decide whether to choose soccer or golf, Robin noticed the decision was easy.

“He was more passionate about it,” Robin said.

In the final round, that passion paid off, but not before a few obstacles had to be crossed.

The short birdie putt Jarvis drained on 18 that no one else could match was the winning highlight, but the two moments that may have cemented the championship for him came earlier in the day. After double-bogeying the par-4 ninth, Jarvis bounced back with a par on the 10th and birdies on the 11th and 12th. Then on the par-3 16th, after hitting his ball in the water, he rolled in a long putt to salvage a bogey to limit the damage.

“If you’re just around him, you realize how confident he is,” UNLV coach A.J. McInerney said. “He has the ability to have a short memory and put whatever happened in the previous hole behind him.”

Michael Collins is back for an all-new season of America’s Caddie. He’ll take you inside the world of golf with exclusive looks at some of the top courses, feature stories, celebrity guests and interviews with the biggest stars in golf. Stream on ESPN+

Jarvis was McInerney’s first verbal commitment after he took over the program this past year. Through golf instructor Andy Leadbetter, whose facility Jarvis trained at his last two years of high school in Orlando, Florida, McInerney was able to get in touch with Jarvis and sell him on UNLV.

On Sunday, over 3,000 miles away in Southern California, a van full of UNLV golf players on their way to a college tournament watched the last few putts on their phones. As the final putt was missed and Jarvis officially won, they all exploded in celebration.

“He has one of the most contagious personalities that I’ve ever been around,” McInerney said of Jarvis’ connection with his teammates and coaches. He’s the only player from Latin America on the team. “It’s hard not to smile when you’re around him.”

As Jarvis entered the news conference on Sunday with a gold medal around his neck, his smile and congeniality were indeed effortless, even if he seemed a bit awed by the lights.

Someone appeared with a club sandwich and fries. His eyes lit up. Water was poured into a wine glass. It was a reminder that he was, after all of this, just 19 years old.

After answering questions, Jarvis received his first assignment as LAAC champion. He spent the next few minutes signing Masters, The Open and U.S. Open flags before exiting and starting his celebration.

As his father Robin joked: “We might not make our flight tomorrow.”