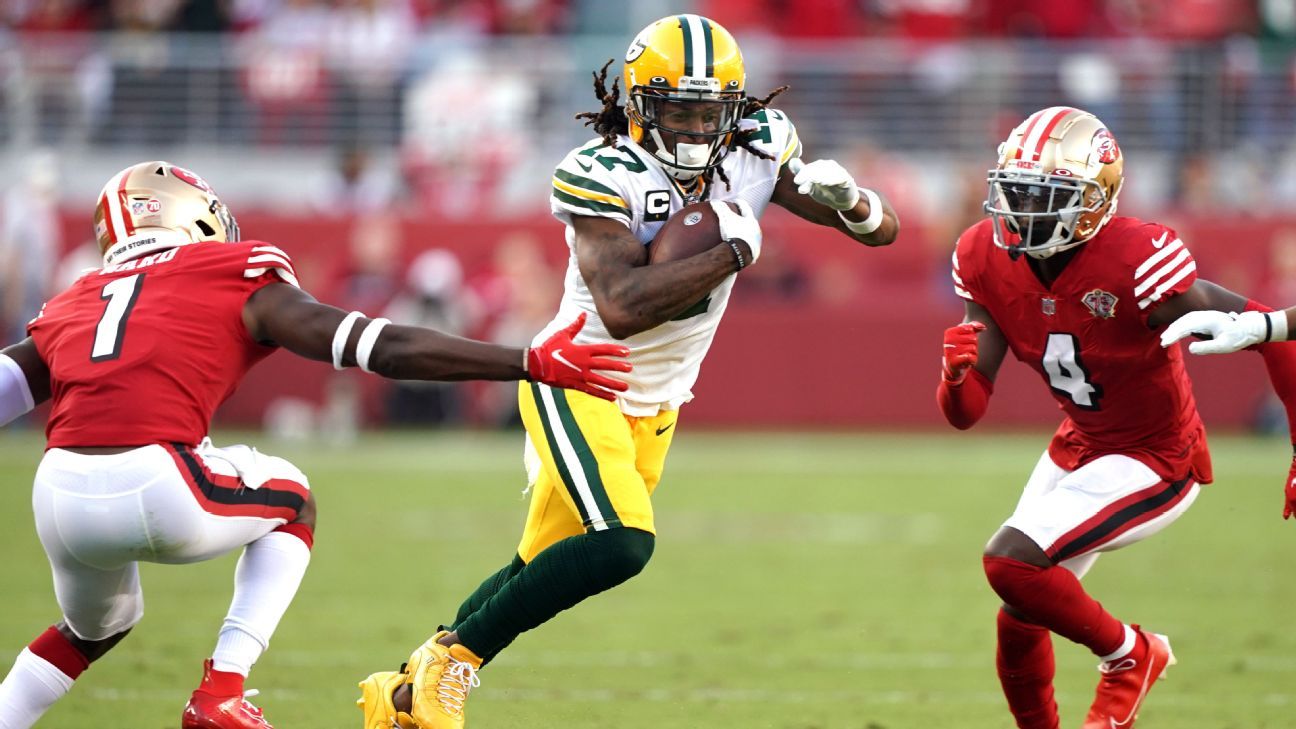 The NFL divisional round for the 2021 season is stacked with four great matchups, and we got you covered with what you need to know heading into the second weekend of playoff football. Our NFL Nation reporters bring us the biggest keys to every game, a bold prediction for each matchup and, of course, final score picks.

Additionally, ESPN Stats & Information provides a big stat to know and a betting nugget for each contest, and our Football Power Index (FPI) goes inside the numbers with a matchup rating (on a scale of 1 to 100) and a game projection. Matt Bowen picks out a key matchup to watch for every game, and Kevin Seifert tells us what to know about the officiating. Everything you want to know is here in one spot to help you get ready for a loaded weekend of NFL playoff football.

Let’s get into the full divisional-round slate, which features the six wild-card game winners from last week and each conference’s No. 1 seed, fresh off a bye week. The weekend culminates with a Sunday night matchup between the Bills and Chiefs, which has the makings of one of the best games of the season.

What to watch for: The Titans have generated 35 sacks and 153 QB pressures using just a four-man pass rush (both ranked second in the NFL), and they have blitzed on only 18% of their rushes this season. Bengals quarterback Joe Burrow‘s QBR was 83.7 against the blitz this season (third), but his 13.6 QBR when pressured was 20th. Impacting Burrow with the front four and dropping seven into coverage will be the key to the Titans winning the game. — Turron Davenport

Bold prediction: Burrow will outgain Titans running back Derrick Henry by 200 yards (obviously including passing yardage). That’s what it will take for Cincinnati to upset top-seeded Tennessee. Burrow has been in great form the past several weeks, so expect Cincinnati to ride the quarterback’s hot hand as it looks to push the tempo in Henry’s expected return. — Ben Baby

Stat to know: Over the final three weeks of the regular season, Titans quarterback Ryan Tannehill posted a 79.4 Total QBR (third best in the NFL over that span), threw seven touchdown passes and didn’t have a single interception. But he also did a lot on the ground this year, as his seven rushing touchdowns were the league’s second most among quarterbacks behind Jalen Hurts‘ 10.

Bowen’s game-plan key: Cincinnati needs to create matchups for receivers Ja’Marr Chase and Tyler Boyd out of inside alignments to beat the Titans’ underneath zone defenders. Read more on E+.

What to know for officiating: Referee Clete Blakeman, whose regular-season crew ranked No. 7 in the NFL with 14.6 flags per game, will preside over a game that includes the NFL’s least penalized team (Bengals, 84). The Titans, meanwhile, ranked No. 17 with 121 flags. Blakeman tied for the second-most roughing-the-passer flags during the regular season (12), but the Bengals and Titans committed only two such fouls apiece. — Seifert

Betting nugget: Tennessee coach Mike Vrabel is 8-0 both outright and against the spread with at least nine days between games. Read more on E+.

What to watch for: There’s cold, and then there’s Lambeau Field cold. It will be the latter on Saturday night, with temperatures in the single digits expected throughout the game. Earlier in the year, Green Bay quarterback Aaron Rodgers said, “the colder, the better.” But Niners QB Jimmy Garoppolo might not feel the same way. Since 2014, there have been 101 different starting quarterbacks in games with kickoff temperatures below 40 degrees, and Garoppolo isn’t one of them. Even during his time in New England, he took only three snaps in games when it was below 40 at kickoff, and all three were kneel-downs. — Rob Demovsky

Bold prediction: In a game that feels like it could go either way, Packers kicker Mason Crosby will send his team back to the NFC Championship Game with a second game-winning field goal in the closing seconds in as many games against San Francisco this season. The Niners have the run game and physical defensive front to keep this close, but Rodgers will find the late-game magic once again to set Crosby up for the winning points. — Nick Wagoner

Stat to know: The 49ers use pre-snap motion on an NFL-high 77% of their plays, and they used it on a season-high 88% of their plays in the Week 3 loss to the Packers. However, they averaged a season-low 5.0 yards per play with motion in that game. One player whom the Packers will have to watch on pre-snap movement is receiver/running back Deebo Samuel, who is seeking to become the fifth 49ers player to reach 100 scrimmage yards and score a touchdown in consecutive playoff games.

Bowen’s game-plan key: Look for Green Bay to hit wide receiver Davante Adams on first down off play-action. His 22 such receptions tied for the league lead. Read more on E+.

Rob Ninkovich says Aaron Rodgers knows he’s come up short in the postseason and that this might be one of his last chances at a Super Bowl.

What to know for officiating: Referee Ron Torbert’s regular-season crew threw the fourth-fewest flags (12.3 per game), and he was assigned to a game that includes the NFL’s second-least penalized team (Packers, 86) and the 14th-least (49ers, 117). San Francisco cornerback Josh Norman, who has been in and out of the team’s lineup, has by far the most penalties of any player in this game (10), including six for defensive pass interference. — Seifert

Betting nugget: The over is 14-6 in playoff games when Rodgers is starting, including 6-0 since 2016 and 4-0 with coach Matt LaFleur at the helm for Green Bay. Read more on E+.

What to watch for: The Rams have been short-handed in their secondary, but the Bucs might be without All-Pro right tackle Tristan Wirfs, who suffered a high ankle sprain last week against the Eagles. That’s a big blow for Tampa Bay against arguably the league’s most devastating pass rush. The Buccaneers might need to rely more on their defense, which nearly pitched a shutout last week against the Eagles but surrendered 331 passing yards and four touchdowns to Rams quarterback Matthew Stafford & Co. in these teams’ Week 3 meeting (a 34-24 win for Los Angeles). — Jenna Laine

Bold prediction: Stafford and Tampa Bay quarterback Tom Brady will each pass for three touchdowns in a game that will be decided in the final minutes. The Rams acquired Stafford with the belief that the veteran QB would play a key role in propelling them to a Super Bowl inside their home stadium. Stafford will have the chance to prove he’s that guy against a seven-time Super Bowl winner. He knows he’ll have to get his team into the end zone often to counter Brady and the Tampa Bay offense; Brady’s 32 touchdown passes in 16 career divisional-round games are 14 more than any other QB has thrown. So watch for both quarterbacks’ numbers to be off the charts. — Lindsey Thiry

Stat to know: Will Rams cornerback Jalen Ramsey shadow Tampa Bay receiver Mike Evans? Evans saw Ramsey across from him on just 18% of his routes in the regular-season matchup in Week 3, per NFL Next Gen Stats. And in two games against the Rams over the past two years, Evans caught eight of 10 passes for 101 yards when seeing someone else. Against Ramsey, he pulled in five of nine passes for 54 yards.

Bowen’s game-plan key: Expect Brady to look for Buccaneers tight end Rob Gronkowski in the middle of the field. Gronk caught 38 of his 55 total receptions this season on throws inside the numbers. Read more on E+.

What to know for officiating: Referee Shawn Hochuli’s regular-season crew threw the third-most flags (15.5 per game), but the Rams and Buccaneers were among the league’s 10 least penalized teams in 2021. The Rams ranked No. 3 (92), and the Buccaneers ranked No. 9 (107). Hochuli’s crew made 57 calls for offensive holding (third most), but the Rams and Buccaneers were flagged only 16 and 20 times for it, respectively (both within the seventh fewest in the NFL). — Seifert

Betting nugget: Since 2010, Los Angeles is 8-1 against the spread when facing Tampa Bay, including 2-1 under coach Sean McVay. And the past five meetings went over the total. Read more on E+.

What to watch for: The Bills did a great job of shutting down the big plays when they faced Patrick Mahomes in Week 5, limiting the Chiefs to one pass longer than 20 yards. Buffalo, meanwhile, connected on four passes of at least 30 yards, with two going for touchdowns. The Chiefs have to find a way to win — or at least stay even with the Bills — in this category, or they might experience another result like that 18-point beatdown. — Adam Teicher

Bold prediction: Bills quarterback Josh Allen will rush for at least 50 yards and throw at least three touchdown passes on Sunday. The Bills’ offense has rushed for 110-plus yards and averaged at least 4.0 yards per carry in six straight games, the second-longest streak in the NFL this year (Eagles). That streak has coincided with Allen being used more as a rusher, which will continue against the Chiefs. He had 59 yards on 11 carries in their meeting earlier this year. Additionally, the offensive line will keep him clean, extending its sackless streak to five games, and allow him to build on a five-pass-TD wild-card outing in a much closer divisional-round game. — Alaina Getzenberg

Rob Ninkovich says the Chiefs’ key to victory against the Bills will be going toe-to-toe with a top defense.

What to know for officiating: Referee John Hussey’s regular-season crew threw the third-fewest flags per game (12.1), but he has been assigned to officiate two of the most penalized teams in the league. The Bills ranked No. 29 (139) and the Chiefs No. 24 (129). The Chiefs were flagged for 36 offensive holding fouls, third most in the NFL, while Hussey’s crew called 40, the sixth most among crews. Hussey’s crew called the league’s second-most taunting fouls (seven), but it threw the fewest flags for illegal contact, defensive holding and defensive pass interference combined (18). — Seifert

Betting nugget: Buffalo road games are 12-4-1 to the over in the past two seasons. Read more on E+.

Matchup must-reads: Manning-Brady 2.0? Why Mahomes vs. Allen could be AFC’s next great QB rivalry … Mahomes is preparing for his next job as team owner … Allen’s elaborate handshakes with Bills teammates about more than just having fun … McKinnon gives Chiefs something to think about at running back … Bills’ No. 1 defense faces stiffer test vs. much-improved Mahomes … Chiefs’ Gay arrested on misdemeanor criminal property damage charge

Rybakina tops Azarenka, to play for second Slam
Is anyone getting into the Hall of Fame? Everything you need to know on ballot reveal day
Georgia WR Thomas arrested on felony charge
Rahm shoots 7-under, tied for lead at AmEx
‘A force to be reckoned with’: Rising American Ben Shelton on dream run at Aussie Open