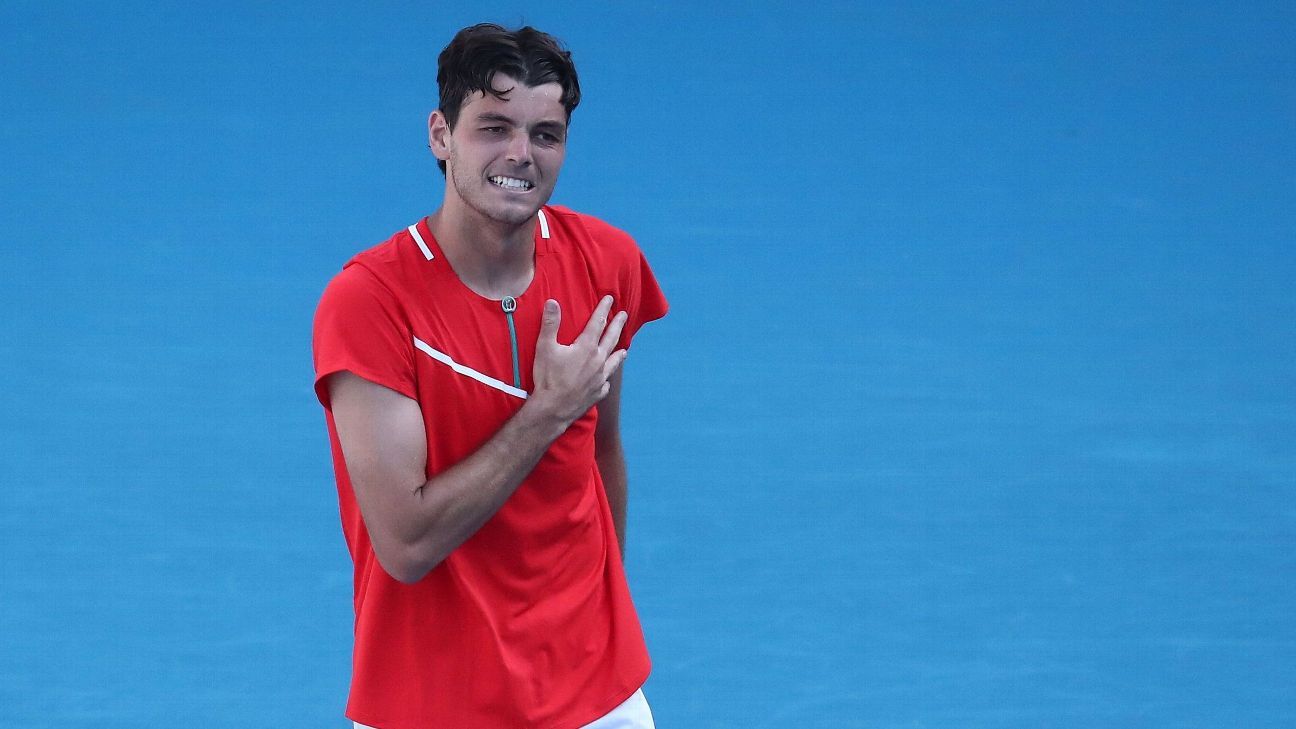 After his two blink-and-you’ll-miss-them forehand winners, and a double fault from opponent Roberto Bautista Agut, Fritz had conquered his own double nemesis: He’d finally reached a fourth round at a Grand Slam, and he’d beaten the man who has time and time again dominated him on the court — his “dad,” as Fritz jokingly calls Bautista Agut.

Ahead of the American player’s 6-0, 3-6, 3-6, 6-4, 6-3 win Saturday, the Spaniard Bautista Agut owned a 5-2 advantage in head-to-head matches against Fritz. But on this occasion, it is Fritz, 24, who is entering the second week of a Grand Slam, the first time ever in his young career.

In tennis, you often see nail-biting moments when a host of emotions cross a player’s face in a split second. With Fritz, you could see the shock in his eyes as Bautista Agut’s second serve hit the net, the smile erupting on his face, and a rush of bubbling emotion as Fritz realized he’d won. Fritz looked to his team and, as his hands came together, cradling his racquet, he mouthed, “Oh, my God.”

“After that match, I was almost close to like tearing up a bit,” Fritz said. “But it seems stupid, because so many people have made the second week of Slams … it’s just eluded me for so long.”

Success in tennis doesn’t have to be gold-plated trophies or No. 1 rankings — it is subjective and can be manifested in personal firsts, or in Fritz’s case, a spell in which his body and mind have come together, permitting him to finally stretch his game.

Fritz’s 2021 was laced with poor fortune: His 2021 Australian Open campaign hit a Novak Djokovic-sized wall in the third round. At the French Open, he left the court in a wheelchair after suffering a torn meniscus in his right knee on match point against him. He fought back from surgery to play at Wimbledon a month later but ran into the unstoppable force of Alexander Zverev in the third round. In August at the Canadian Open, he suffered shortness of breath during a match with James Duckworth and nearly pulled out. He played on, lost, and then revealed afterward on Twitter that he had received a barrage of abuse and threats from gamblers for his decision to continue. Then came the US Open, where he lost in four sets in the second round to compatriot Jenson Brooksby.

It might have looked like the bad luck had followed him to Melbourne, Australia, as Fritz cramped up after winning match point against Frances Tiafoe in the second round. But, here he is, moving on to the next round.

Which begs the question: Why has the breakthrough come now? He was asked whether his higher seeding (20) at the Australian Open gave him a slightly more favorable draw.

“I was telling people, actually, if you want to make fourth round at a Slam, it actually might be better to be unseeded than a 25-to-32 seed,” he said after beating Bautista Agut. “At 25 to 32, you’re going to have a much better chance of making the third round, which I did a lot, but then you’re going to play a top-eight player. I knew I needed to get myself into that 17 to 24, whatever it is, to give myself a much better look.”

But this run of form is not just down to the way the cards have fallen. Nor is he playing up to the Netflix cameras following him for its new documentary. “It’s just a coincidence,” he said. “I haven’t really thought much about it. I’m really just trying to play tennis and do all my own stuff.”

The foundations for this long-awaited leap into a Grand Slam second week were really laid after his defeat at the US Open. He hit a reset button and told Tennis Magazine in December that he was playing third-round matches too “passively.” So he focused on shifting his mindset, adopting a more “aggressive” approach to his shot selection.

“I developed a little more confidence in my shots, and used my forehand as more of a weapon,” he said. That saw him finish 2021 on a high with a run to the semifinals at Indian Wells in October — after knocking out Matteo Berrettini and Zverev. He carried that form into the Australian Open.

At Melbourne, his path through to the fourth round hasn’t been without its drama. He opened the tournament with a straight-set win over German Maximilian Marterer, before seeing off Tiafoe in an all-American second-round clash, despite being hit by cramps after winning match point.

“Nerves, nerves are a crazy thing,” Fritz said. “You know, I’ve never cramped on court in my life, but I ruined my streak on that match point on the last shot. It’s just because, for whatever reason, probably just because it was Frances, just extra nervous in that match, and it really, really affected me.”

Next up was his tennis nemesis Bautista Agut. Fritz ended up beating him in five sets, with his newfound confidence in his power game paying off. By the end, he had fired 73 winners to Bautista Agut’s 35. “It means a ton, and to do it against someone who has basically been my ‘dad’ my whole professional career,” Fritz said.

Now Fritz faces world No. 4 and fourth seed Stefanos Tsitsipas. The two faced each other a fair bit on the junior circuit, but they’ve met just once competitively in the past three years — a match Tsitsipas won at the Paris Masters in 2019. Tsitsipas has kept a close eye on Fritz in Melbourne, saying: “[Fritz] has improved a lot in the last couple of years, so he is someone I’m going to take very seriously.”

For Fritz, he’s looking to continue navigating this uncharted journey.

“Funnily enough, I feel much better after this match than I did after my last match,” Fritz said Saturday. “If my body is feeling good and I’m feeling good, then I feel confident.”