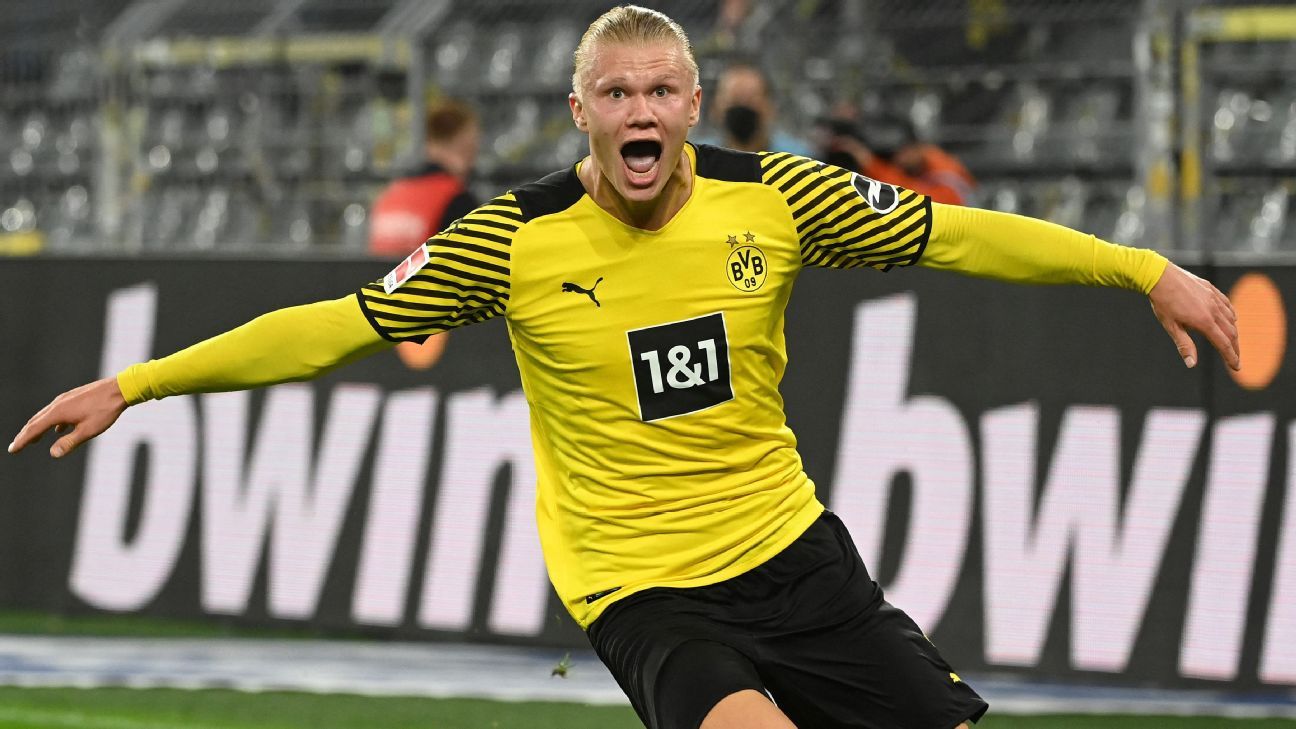 Manchester United have suffered a blow in their pursuit of Erling Haaland — ESPN’s Insider Notebook has the latest. PLUS: Dusan Vlahovic is a man in demand.

United out of Haaland race

Manchester United are out of the race to sign Erling Haaland, sources told ESPN, with the club ready to focus on alternative attacking options having been made aware the Borussia Dortmund forward favours a summer move to Real Madrid.

Haaland, 21, is expected to leave Dortmund at the end of the season due to a €75 million release clause becoming active in his contract at the Bundesliga club this summer.

– Haaland’s next move: Each club’s prospects of landing him ranked
– Stream ESPN FC Daily on ESPN+ (U.S. only)
– Don’t have ESPN? Get instant access

United failed to sign Haaland from FC Salzburg when he moved to Dortmund in January 2020, despite the club maintaining a long standing interest dating back to his emergence as a 16-year-old at Molde in Norway. Sources told ESPN that senior figures at Old Trafford believe that Haaland is destined for Real this summer and that United are not in a position to convince the player or his advisors to reconsider his options.

With Edinson Cavani out of contract and likely to leave at the end of the season and Cristiano Ronaldo 37 next month, United are focusing on other options to solve their search for a proven goalscorer.

ESPN reported in December that Real are attempting to sign both Haaland and Paris Saint-Germain forward Kylian Mbappe this summer, although the LaLiga champions face strong competition from Manchester City for Haaland, who will command wages of £30m-a-year at whichever club he decides to join.

But despite City’s interest and ability to compete with any financial package presented to Haaland by Real, the Premier League champions lag behind favourites Real in the battle to sign the Norway international.

The turmoil at Old Trafford has severely damaged United’s prospects of signing Haaland, although sources have said that the dismissal of Ole Gunnar Solskjaer as manager in November — Solskjaer gave Haaland his debut at Molde — has not contributed to their diminishing hopes.

Sources said that although the Haaland camp are admirers of the work done by United interim manager Ralf Rangnick at previous clubs, the prospect of signing for United while they remain in a period of transition, and potentially out of the Champions League, has made the 20-time English champions an unappealing proposition considering the other teams in the race to sign Haaland.

United know that Haaland does not see them as a viable option in the present circumstances and are focusing on the recruitment of a permanent manager rather than devoting time to the pursuit of a player who favours a move elsewhere. — Mark Ogden

Dusan Vlahovic is a man in demand, with sources telling ESPN that as many as eight of Europe’s leading clubs are interested in the Serbia international.

The 21-year-old has scored 20 goals in 24 games for Fiorentina so far this season and has emerged as one of the hottest properties in the game in recent months. Arsenal are reportedly keen on landing the player this month, but a move in January is unlikely and they face competition from Europe’s biggest clubs.

– Tor-Kristian Karlsen: Inside the transfer window

Borussia Dortmund‘s Erling Haaland and Tottenham’s Harry Kane are likely to be the most sought-after centre-forwards in the transfer market this summer. Bayern Munich‘s Robert Lewandowski would potentially be available if the Bundesliga club decide to offload the 33-year-old should he reject the opportunity to extend his contract beyond its June 2023 expiry date.

But with several top clubs needing to recruit a centre-forward, sources said that Vlahovic is likely to move to a team that misses out on Haaland and Kane. Manchester United, Manchester City, Arsenal and Barcelona are all in the market for a striker this summer, with Bayern and Paris Saint-Germain also likely to be in the hunt if Lewandowski and Kylian Mbappe leave the Allianz Arena and Parc des Princes respectively. Sources said that Atletico Madrid and Juventus are also potential options for Vlahovic, although the deep-rooted rivalry between Juve and Fiorentina could prove problematic even if Juventus are able to fund a bid for the former Partizan Belgrade striker.

Vlahovic is under contract at Fiorentina until June 2023 and sources have said that the Serie A club accept that they will have to offload the player this summer to avoid losing him for nothing as a free agent next year. — Mark Ogden

Zakaria, 25, is out of contract at the end of this season and his agents have held talks with some of Europe’s biggest clubs. However, a source close to the negotiations said Liverpool, Bayern and Dortmund are the three sides to have made the “most serious” approaches.

Monchengladbach are open to letting the Swiss international leave this month to avoid losing him for free in the summer. The player’s camp are negotiating with a view to making a move in January but are also happy to wait until the end of the season if necessary. They have also held talks with Juventus and Manchester United, but a move to Old Trafford is viewed as an unlikely option in terms of this transfer window. A source said the uncertainty at United, with interim coach Ralf Rangnick only in place until the summer, has counted against them.

Zakaria joined Monchengladbach from Young Boys in 2017. He has made 138 appearances for the German club but is now ready to take the next step in his career. — Sam Marsden and Moises Llorens

Gab Marcotti explains how Real Madrid have the finances for two huge transfers in the summer.

Eden Hazard‘s Real Madrid teammates believe the out-of-favour forward will stay at the Bernabeu until the summer before taking a decision on his long-term future, sources close to the dressing room told ESPN.

Hazard wants to stay at the club and hasn’t given up hope of making an impact this year, with Madrid favourites to land the LaLiga title, having already picked up the first silverware of the season by winning the Spanish Supercopa. The Belgium international’s substantial wages would make a departure this month extremely difficult, sources said. Hazard has made 27 starts in LaLiga in two-and-a-half years in Spain, scoring four league goals.

“I don’t have to give advice to Hazard. He has the character and experience to choose what’s best for him,” coach Carlo Ancelotti said on Wednesday.

Contrary to reports that Hazard has been made available by Real Madrid this month, the club have in fact been willing to let him go since last summer. Disappointment at his minimal contribution in his first two, injury-hit seasons turned to anger when he was pictured laughing with former Chelsea teammates after they knocked Madrid out of the Champions League semifinals last May.

However, no offers for Hazard have been forthcoming, with interest hit due to his injury record, the costs involved in any potential deal, and the player’s desire to persevere in Madrid. — Alex Kirkland and Rodrigo Faez

Anthony Martial and Eric Bailly are concerned they are being priced out of loan moves away from Manchester United in the January transfer window, sources told ESPN.

Martial and Bailly are open to leaving the club this month in the hope of finding more regular first-team football elsewhere but the pair are not convinced deals will materialise.

United are only considering loan offers for first-team players which include a guarantee that all their wages will be covered and a loan fee.

Sevilla have already had a bid from Martial knocked back while Juventus would need United to drop their demands before firming up their interest in the Frenchman. AC Milan have expressed a interest in signing Bailly until the end of the season but do not have the money available to match United’s conditions.

Sources told ESPN that interim manager Ralf Rangnick’s preference is to keep the bulk of his squad together until the end of the season, in part because of the continued possibility of losing players due to COVID-19. — Rob Dawson

Frank Leboeuf believes Tottenham were fully deserving of their last-gasp 3-2 win over Leicester.

Steven Bergwijn‘s dramatic match-winning cameo against Leicester on Wednesday has reinforced Tottenham’s valuation of the midfielder which has so far frustrated Ajax during negotiations, sources told ESPN.

Spurs are believed to be seeking to recoup the majority of the €32million they paid PSV Eindhoven in January 2020 but Ajax have so far only shown a willingness to pay around half that figure.

Bergwijn’s brace off the bench at the King Power Stadium has only strengthened Spurs’ resolve.

The 24-year-old was introduced as a 79th minute substitute with Tottenham 2-1 down before scoring twice in stoppage time to secure what could prove to be a vital win in the hunt for a Premier League top-four finish.

Head coach Antonio Conte is also willing to continue using Bergwijn should an agreement not be reached with Ajax. It remains to be seen whether Wednesday’s outing convinces Ajax to raise their offer or marks the start of Bergwijn’s revival in north London. — James Olley

Concerns over the dangerous state of the San Siro pitch are likely to grow this weekend, with two matches in two days — culminating in AC Milan‘s clash with Juventus.

AC Milan defender Fikayo Tomori required keyhole surgery on his meniscus after he limped off during his side’s Coppa Italia win over Genoa on Jan. 13, having pulled up mid-run. The match took place a day after the Italian Super Cup between Inter and Juve at San Siro, which went to extra-time.

AC Milan boss Stefano Pioli said: “In this period, for the climate, the pitch cannot be the best. There are so many games there is no time for an intervention. After the [international] break, we hope to play on a cleaner pitch, to be faster.”

The issues surrounding the state of the turf will be tested further with three crucial Serie A matches in quick succession. Inter Milan host Venezia at 12 p.m. ET on Saturday before Milan welcome Juve at 3 p.m. ET the day after. The following match to take place at San Siro is the Milan derby on Feb. 6. — Andrew Cesare Richardson

Breaking down the NBA’s historic surge of 50-point performances this season
Agent: Turner, Pacers reach 2-yr., $60M extension
What to do with Dak Prescott: Three options the Cowboys must consider
Djokovic back at No. 1 on ATP after Aussie Open
‘When he hits you, it’s different’: What it’s like facing the KO power of Derrick Lewis