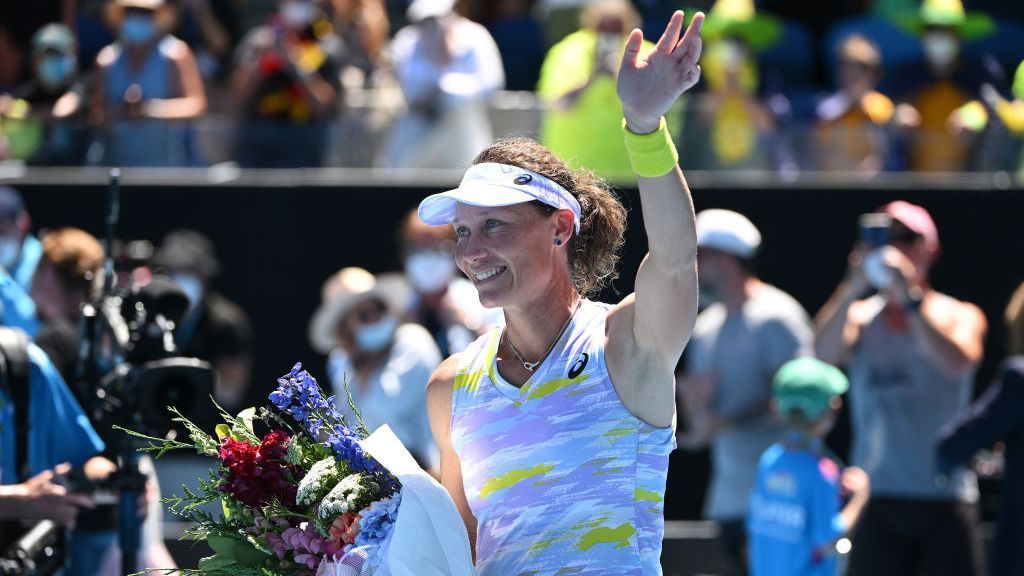 Samantha Stosur‘s decorated singles career is over after a second-round defeat in her farewell Australian Open at Melbourne Park.

The 2011 US Open champion bowed out with a 6-2 6-2 loss to Russian 10th seed Anastasia Pavlyuchenkova on Thursday.

Stosur received a standing ovation from the Kia Arena crowd before departing after a record 20th Open campaign, the most by any Australian women’s tennis player.

Still alive in doubles, Stosur had extended her singles retirement with a rousing first-round comeback win over American wildcard Robin Anderson on Tuesday.

But the 37-year-old was unable to repeat the heroics against last year’s French Open runner-up, Stosur’s 1063rd match over a career spanning more than two decades lasting just 68 minutes.

The one-time world No.4 finishes as a modern-day great of Australian tennis.

The top-ranked Australian singles player – male or female – for a record 441 consecutive weeks between 2008 and 2017, Stosur was a fixture in the world’s top 25 for nine consecutive years.

As such, the Queenslander carried the Open hopes of the nation every summer for more than a decade.

Alas, she was rarely able to produce her finest tennis under the intense glare and pressure, runs to the fourth round in 2006 and 2010 Stosur’s best efforts in Melbourne.

Fittingly but somewhat ironically, the last two wins of Stosur’s grand career came in front of her home fans at Melbourne Park – a year apart against fellow Australian Destanee Aiava at the 2021 Open and Anderson this week.

Often maligned for her Open flops, Stosur boasts an exceptional record on the Paris clay and Flushing Meadows hard courts.

Conquering Serena Williams, arguably the greatest player of all time in the 2011 US Open final in New York on the 10th anniversary of the 9/11 terrorist attacks on America, remains Stosur’s crowning achievement.

Her love affair with the red dirt of Roland Garros, though, equally defined her largely under-appreciated career.

As well as reaching the 2010 title decider, having knocked out Williams, three-times champion Justin Henin and fellow former world No.1 Jelena Jankovic in an inspired run to the final, Stosur made the semi-finals in Paris on three other occasions.

She was a claycourt giant at the height of her career and never getting her hands on the Suzanne-Lenglen Cup is Stosur’s biggest lament, if not regret.

Stosur walks away as the 22nd highest earner in women’s professional tennis history after amassing $27,490,735 in prize money.

She reached world No.1 in doubles in 2006 and represented Australia at a record five Olympic Games.

“I’ve done more than I ever thought was possible,” Stosur said. “I dreamed of winning a grand slam so to do what I’ve done after dreaming as a little kid is phenomenal. I couldn’t ask for any more.

“I’ve had many great moments here in Australia and around the world so it’s been amazing.”

Ferrari: Frederic Vasseur says team are aiming for title win this year
Let’s play out the offseason QB market: We made offers and chose landing spots for Brady, Young, Carr
First look at Chiefs-Eagles: Early Super Bowl picks, big questions and matchups to know
Early MLB 2023 trade deadline preview: Player most likely to be traded for all 30 teams
Who will go to the Super Bowl? Our guide — including picks — for 49ers-Eagles, Bengals-Chiefs