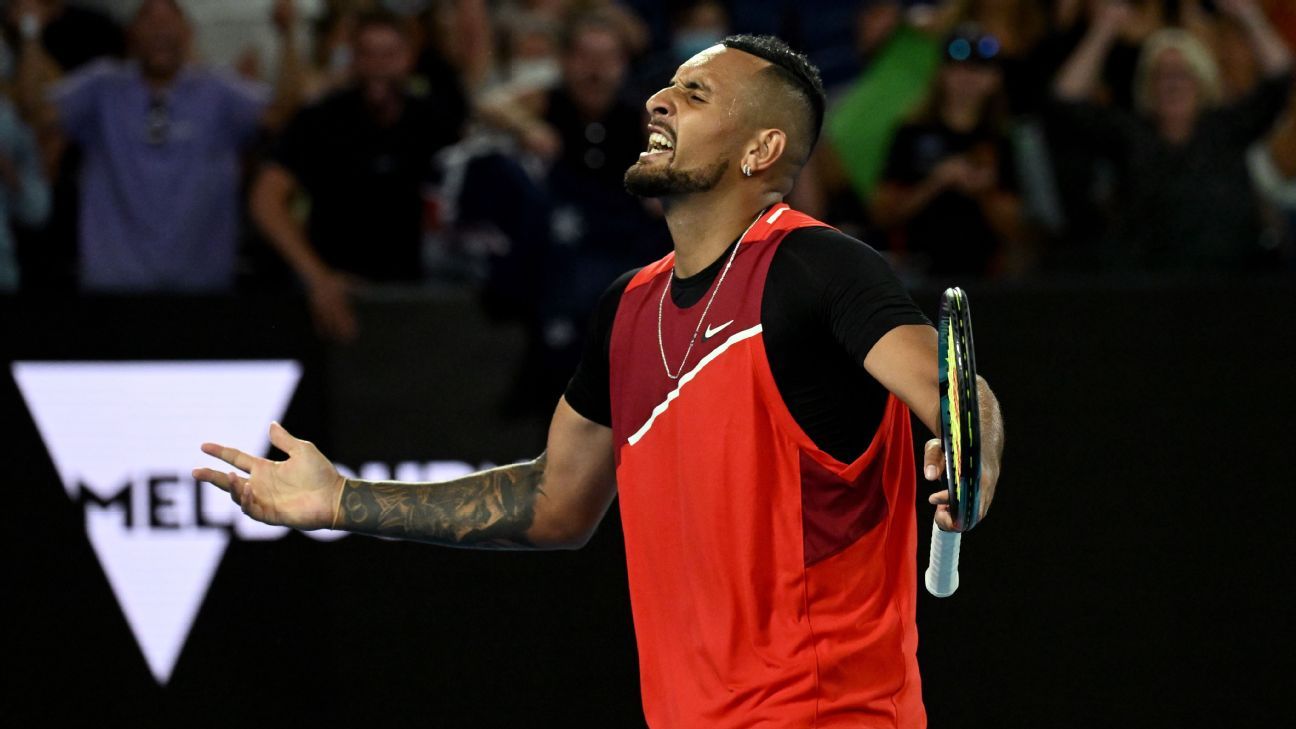 MELBOURNE, Australia — On paper, a second-round Grand Slam match featuring the highest-ranked player in the tournament and a man languishing outside the top 100 wouldn’t be one to stir even the slightest amount of interest or excitement in the average tennis fan.

But when that lowly ranked player is the flamboyant Nick Kyrgios, that changes everything. The 26-year-old from Australia’s capital is arguably the sport’s greatest showman, and within an hour of Tennis Australia scheduling his round of 64 encounter with Russian ace Daniil Medvedev on Rod Laver Arena, not a single ticket remained available for purchase.

After all, if his opening match against unheralded Brit Liam Broady was box office — it featured underarm serves, behind-the-back shots, the trademark Cristiano Ronaldo “siu” celebration and even a sip of beer — then what was to come when he faced the second-ranked player in the world?

For three hours, Kyrgios and Medvedev entertained and dazzled, lifting each other to great heights. But, ultimately, the match highlighted a stark contrast between the fiery and unpredictable Kyrgios and the almost robotic Medvedev, who in the past 24 months has made a habit of grinding opponents down on hard courts with his ability to extended each and every rally. He did it in the second round to Kyrgios, winning 7-6, 6-4, 4-6, 6-2.

Kyrgios must have exchanged words with chair umpire Carlos Bernades on a dozen occasions, as a stoic and determined Medvedev stood in position at the other end of the court, waiting to commence the next point.

The contest also threw up a familiar question, which has plagued Kyrgios throughout his controversial career: Just how good could he be if he actually loved the sport?

Kyrgios, ranked 115th in the world, has admitted on numerous occasions that tennis is more or less his “part-time job.” It’s not exactly a passion of his. He’s a basketball tragic, avid gamer and fashionista who just happens to be good at striking a ball over a net.

In fact, if rankings were determined on raw talent, even Kyrgios’ greatest critics would struggle to argue he’s not a top 10 player on the tour. Few possess anything remotely close to the power he can generate with just a flick of the wrist. You could count on one hand the amount of professionals who would even dare attempt some of the circus shots that are now staples of a Kyrgios match. It’s only his imperturbable demeanor toward the sport which has prevented him from ever cracking the ATP top 10 or taking himself deep at a major.

There were patches against Medvedev where it was Kyrgios whose level resembled that of the second-best player on the planet. There were jaw-dropping cross-court slashes, pin-point service games and baseline-deep drop shots even the fastest player on tour wouldn’t have been able to retrieve.

“Obviously I’m not happy with drawing Daniil in the second round, because my ranking slipped,” Kyrgios said after the match. “If I play 95% of people [in the second round] on that court, I think I win, to be honest with you.”

Perhaps. But the the trick shots he brought out at critical junctures, which more often than not failed, let Medvedev off the hook. And Kyrgios did himself no favours by gifting Medvedev too many points when he trailed in a game.

“Nick’s one of, if not the most, talented player in the world,” Broady said after his first-round defeat to the Australian. “He makes you feel stupid with the shots he hits, [but] if you told him to stop all of that showmanship, and all of the stuff he does on court, then it would take away a big strength of his game.”

It’s worth remembering that this time last week Kyrgios was isolating with COVID-19 and there was doubt surrounding his participation in the Australian Open. He does deserve credit for forcing Medvedev to play at his absolute best, but fans will always be left wondering what could have been when it comes to Kyrgios.

Given his blasé attitude toward tennis, intrigue has been building around Kyrgios’ future over the past 24 months. It would hardly come as a shock if he decided to walk away from the sport and never look back. Tennis has such few true characters and losing the personality of Kyrgios, smack bang in his athletic prime, would be a real shame.

But if he’s pocketed almost $10 million before his 27th birthday, and had enough, could you really blame him?

“You know, I could obviously feel the match was coming to an end, so I was looking around and just embracing every little moment,” Kyrgios said. “Every little light in that stadium is special, because I remember when I was a young kid that was a court I remember watching a lot of tennis matches on. One day I thought I was going to be there and entertaining millions of people. It became reality. It was a special moment for me.

“At my point of my career, the ups and downs of life in general — I don’t take any moment like that for granted.”