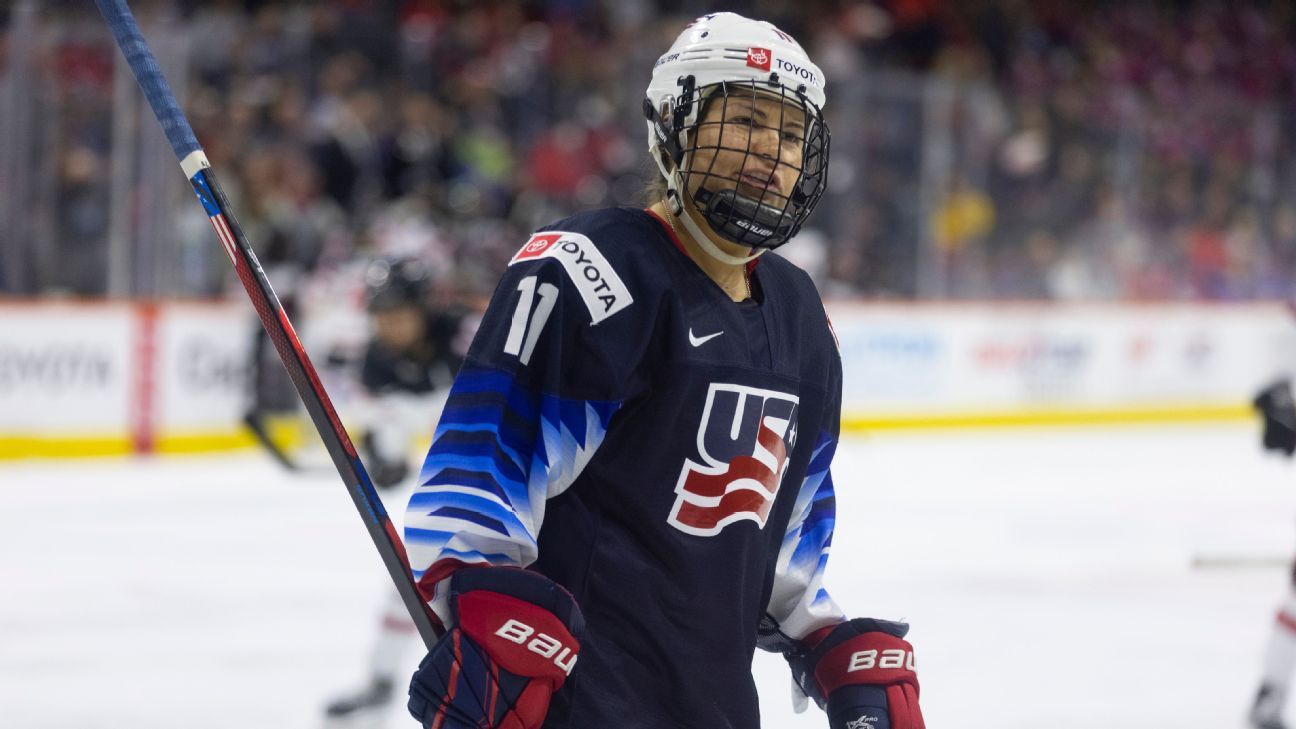 In the Upper Peninsula of Michigan, just across the river from the Canadian border, sits Sault Ste. Marie. That’s where Abby Roque grew up.

“It’s a small community, but a big hockey town,” she said. “That’s the sport to play in the Sault.”

Roque is a member of the Wahnapitae First Nation, which is based in Ontario. Her uncle, Larry, is the chief of their tribe. Growing up, Roque was surrounded by other kids with similar backgrounds.

“We are a community that is very heavily Indigenous,” Roque said. “It was something that was just normal to me. There wasn’t that big of a divide between Indigenous players on the team and those who were not.”

Roque fell in love with hockey at a young age. Her father, Jim, coached at Lake Superior State in Sault Ste. Marie. He now is a scout for the Toronto Maple Leafs.

Jim first put his daughter on skates in the backyard rink that he built, and soon she was sitting in the stands, taking in all of his team’s practices and games. Roque didn’t know much about the opportunities available to her playing hockey. She just knew she wanted to be on the ice as often as possible.

But as she advanced through the levels of the sport, she noticed there were fewer and fewer players who looked like her. First, it was because of her gender. Girls teams didn’t exist in the Upper Peninsula, so she played exclusively with boys.

“For two or three years, there was another girl in the association, she was a year below me,” Roque said. “But then she went over and started playing boys hockey in Canada in peewees. So then, for a while, it was just me for a lot of years.”

After Roque committed to the University of Wisconsin and stepped on campus for training camp in 2016, it marked the first time she would play women’s hockey year-round. When she started, Roque noticed there weren’t many players with her background.

Next month, the 24-year-old Roque will make her Olympic debut for the U.S. women’s national team. Roque will be the first Indigenous player on Team USA’s hockey roster and the team’s only BIPOC player.

“I never processed how few Indigenous players are actually playing hockey around the world,” Roque said. “Back home, there were so many Indigenous players around, and now I’m sitting here as the only player and first player on the U.S. women’s team that’s Indigenous. It’s a cool moment and something I’m so proud of, but something I obviously want to help change. I want to see more Indigenous players playing the game and making these teams. It’s really eye-opening.”

Many in the women’s hockey community have pegged Roque as the sport’s next breakout star. A 2020 finalist for the Patty Kazmaier Award, an honor given to the top women’s college hockey player in the U.S., she finished her Wisconsin career ninth on the school’s scoring list (170 points) and seventh in assists (114). She also scored 21 power-play goals and recorded a plus-136 rating. Teammate and soon-to-be four-time Olympian Hilary Knight has gushed about the Roque, saying, “I think she’s going to be the best player in the world. Plain and simple.”

For Roque to get to this point, she had to blaze her own path. It wasn’t a linear journey, and the end goal wasn’t always clear.

Roque is brimming with confidence, which she credits to her upbringing. Despite standing out, she felt nothing but encouragement from her inner hockey circle.

“I never played with a single guy who wasn’t so supportive of me and wanted me on the team,” she said. “It was never a question of, ‘She’s a girl, she can’t play.’ It was always, ‘She’s good, she should be on the team.'”

That doesn’t mean things were always smooth. “It was more people on other teams when you ran into problems,” Roque said.

By the time she got to high school and played on the boys’ varsity team, Roque said she would get two different reactions on the ice. Some opponents would skate up to her and say things like, ‘It’s so cool to see you out there. I hear you’re committed to Wisconsin, congrats.’

“Then there were other teams that would try to target you, run you through the boards, chirp [at] you,” she said.

What happened on the ice was never as bad as what was going on in the stands.

Roque controlled only what she could, which was her game. Her body and skill set were different than her male teammates, and Roque was always finding ways to use that to her advantage.

“Especially when you get to the high school level, a lot of these boys are taking off with their strength and their speed and their size,” she said. “I was probably 5-4 freshman year, a [140 pounds], and I’m sitting there having to learn a different game than a lot of these guys.”

Despite being the smallest on the ice, she had to be tough. She learned to take checks and make plays off them.

“I also knew I wasn’t going to beat anyone with my speed or anything like that, so I had to play the smart game,” Roque said.

If she held onto the puck too long, she knew she was going to get buried into the boards. So she focused on making passes, making plays and seeing the game faster than anyone else.

Roque moonlighted for Little Caesar’s girls teams for a handful of tournaments, her first exposure to girls hockey. “It was definitely an adjustment,” she said. “I had to teach myself to lay off the body.”

Turns out, Roque was really good. She was invited to a second tryout and then made the roster. She made the team again the next year. Since her dad is a Canadian citizen, she had the option to skate for Canada or the U.S.; she chose to play for the latter.

“I never really thought about it,” she said. “I’m proud of my Canadian roots, and my tribe is in Ontario, so it’s interesting to have both. But I’m American. I finally got my dad out of his Canadian hats, but I came home for Christmas and there was a Canadian flag in the garage. I’m like, ‘Dad, come on!'”

When Roque committed to Wisconsin, it was time for her to fully transition to the women’s game. Coaches were constantly telling Roque to shoot more and hold onto the puck longer — counterintuitive to how she conditioned herself to play in boys hockey. Containing her own physicality continued to present problems.

“I definitely got a lot of penalties body checking by accident,” she said. “I once got a two-game suspension for a check. Someone was coming at me. I just dropped them because I didn’t think about it. I thought they were trying to hit me. Then I get towed out of the game. I’m like, ‘I get four penalties a year in boys hockey, this is nuts!'”

Playing on boys teams undoubtedly shaped who Roque is today. At 5-foot-7, she prides herself on both her hockey IQ and skills. She sees the game well, but isn’t afraid to get into the gritty areas, and rarely loses battles.

Growing up, Roque modeled her game after the players on her dad’s college team. When she went home at night, she’d tune into the NHL and loved watching Patrice Bergeron and Rick Nash. Visibility remains an issue for women’s hockey; Roque simply didn’t have many opportunities to watch women play. That’s something she hopes to change for the next generation.

When she returned home for Christmas, Roque was delighted to see more girls at the rink than ever before. “A couple [of] girls were at the rink just to watch me; they wanted to see me skate,” she said. “That was so cool to me. I think girls now realize they can play, that was the big piece.”

Growing up, Roque didn’t have that awareness. With the Olympics being the highest-profile women’s hockey tournament in the world, players are potential role models. Roque represents something more.

“Being able to see somebody like yourself at the level you’d want to picture yourself is incredibly important,” she said. “Because then you can say, ‘Oh that can be me.'”

Stepping into a leadership role has come naturally for Roque.

“It’s cool to see her standing in her power because she realizes she does have a voice,” her good friend and Wisconsin teammate Sarah Nurse told ESPN last year. “She feels she’s representing a whole group of people and can be a role model for them. When she stepped on campus, she let it be known, ‘This is where I’m from, I made it, this is who my family is.’ It makes me proud to see how proud she is.”

Roque and Nurse will put their friendship aside next month as Nurse is a standout forward for the Canadian team. But ultimately they have the same goal: making hockey more inclusive for everyone. Visibility isn’t the only barrier.

“Hockey is one of the most expensive sports out there,” Roque said. “Hockey really wasn’t that expensive for me growing up; we made it affordable. We had so many fundraisers as teams, we had a lot of sponsors. You realize when you leave that some of these programs are charging people so much money to play hockey, and it’s unattainable for a lot of families. Then you realize, hockey isn’t the welcoming of a sport.

“If you don’t know hockey and you turn it on, you have no idea what’s going on. It’s so confusing. If you want to put your kid in hockey, it’s like, ‘I don’t know what gear they need, do they need shin pads or what shin pads or how to even put the gear on.’ So as hockey people, we need to make it as welcoming as we can, so everyone feels welcome to try hockey.”