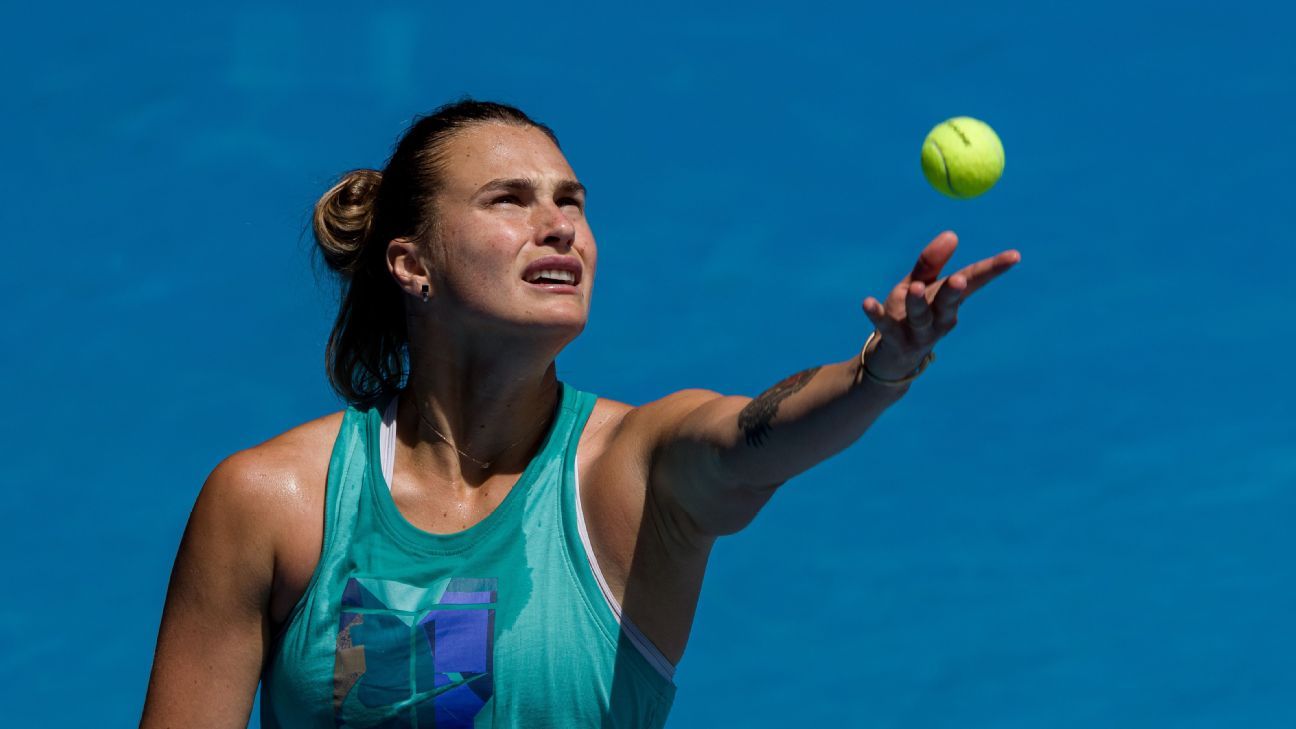 Athletes spend decades trying to trick the mind. But what happens when the mind tricks the athlete?

Aryna Sabalenka arrived in Australia earlier this month with her focus set squarely on achieving her longtime dream of winning a Grand Slam.

Having had a breakthrough season in 2021 in which she reached her first career major semifinal at Wimbledon, and then matched the result at the US Open soon after, and climbing to the world No. 2 ranking, the 23-year-old wanted even more from the new year — and it seemed well within reach.

But then everything went haywire.

Playing in two lead-in tournaments in Adelaide to open the season, Sabalenka was betrayed by her typically-dominant serve. She lost in the first round in both events — to Kaja Juvan and Rebecca Peterson, respectively — and recorded a combined 39 double faults. At times she was even forced to resort to serving underhand as she simply was unable to get the ball into play otherwise.

Sabalenka couldn’t hide her frustration, or her tears. Her struggles went viral, and the headlines soon followed:

“Aryna Sabalenka is an Australian Open title contender, but her serve may stand in the way of victory“

With such a disastrous start to her time Down Under, no one knew what to expect from Sabalenka in her opening-round match at the Australian Open against Storm Sanders, a wild card ranked No. 128, on Rod Laver Arena on Tuesday. She opened the match with an ace but had recorded four doubles faults by the end of her second service game. When she went down a set and a break, and was seen rolling her eyes in disgust at herself and angrily bouncing her racket off the court, it seemed as if her unexpected losing streak would continue.

But then something changed. Her serve didn’t magically return to its peak form, but she got out of her own head and stopped letting her serving woes impact every shot after.

Each won point, and then each game, bolstered her confidence, and she appeared more and more like the Sabalenka the WTA tour has to come to know and opponents fear. After over two hours of battle, Sabalenka won the match, 5-7, 6-3, 6-2. She admitted to being relieved by the outcome.

“The beginning of the match, when I served in, it actually surprise me,” Sabalenka said after the match. “You see how bad was it, so it surprised me and I wasn’t ready for the next shot.

Now Sabalenka will have to continue doing just that — no matter what is happening with her serve — in order to make her dream come true. Next she’ll have to get past Wang Xinyu, a 20-year-old coming off of her first major main draw victory, on Thursday in the second round.

What makes Sabalenka’s recent woes particularly surprising is just how good her serve can be when she’s at her best. She has always struggled with consistency in that department but nothing like what happened in her first two matches of 2022. Even with some issues, particularly down the stretch in 2021, she still recorded the second-most aces on tour (357) and ranked in the top 10 in both serve points won and service games won.

She’s been considered one of the most powerful ball hitters on tour for most of her career, and it makes for a lethal combination when her serve is on. Even 23-time major champion Serena Williams raved about her hard-hitting ahead of their meeting last year at the Australian Open and perhaps gave her the ultimate compliment when she said she was, “Strong like myself.”

And Sabalenka has made no secret about her ongoing quest for improvement, even when things are going well. Just moments after winning her quarterfinal match at the US Open in September, Sabalenka was spotted on the practice courts trying to perfect her serve and work on her movement.

Her serve was much of her focus during the offseason as well. She had told the chair umpire in Adelaide her issue was a “technical problem,” but after the victory over Sanders, Sabalenka said she doesn’t believe the issue has ever been about the serve itself.

“”We worked a lot on serve But it’s not about my serve. If you see me serving on practice court, it’s perfect. It’s [an] amazing serve.””

“We worked a lot on serve,” Sabalenka said on Tuesday. “But it’s not about my serve. If you see me serving on practice court, it’s perfect. It’s [an] amazing serve.

“I think it’s all about in here,” she added, while pointing to her head. “I was thinking a lot on my serve. I was, I tried to control everything and this is not how it works. I have muscle memory and I just have to trust myself and, yeah, that’s what I did in the middle of the second set.”

She admitted it took some work to figure that out, too.

After the second loss in Adelaide, Sabalenka received a text from former Wimbledon and US Open finalist and top-10 player Mark Philippoussis. His message was simple: “Well, girl, just stop thinking a lot on your serve.”

Philippoussis was commentating at the tournament, and he offered to meet up with her later that day to help. That night, the pair, joined by her coach, spent several hours on the practice court. He offered her some tips and encouraged her to stay positive.

“I’m really thankful to him for this help because that’s what helped me today on match to just survive there,” Sabalenka said.

Now Sabalenka, a 10-time winner on the WTA tour and a two-time major doubles champion, will look to maintain that same attitude in her next match, and beyond. The Australian Open provides a chance for not only a first career major singles title but also an opportunity to take over the world No. 1 ranking. Sabalenka could do just that with a final appearance (and current No. 1 Ashleigh Barty losing before the quarterfinals) or with a victory (and Barty losing before the final).

Of course, after the challenges she’s already had this season, Sabalenka wasn’t talking about that on Tuesday. She was just grateful to play another day in Melbourne and hopeful she would keep improving.

“I didn’t play my best tennis,” she said about the match against Sanders. “But I’m not looking for the best tennis [at] the beginning of the tournament. I just want to build myself through the matches. And I just really am happy right now that I was able to [get] through this tough match.”