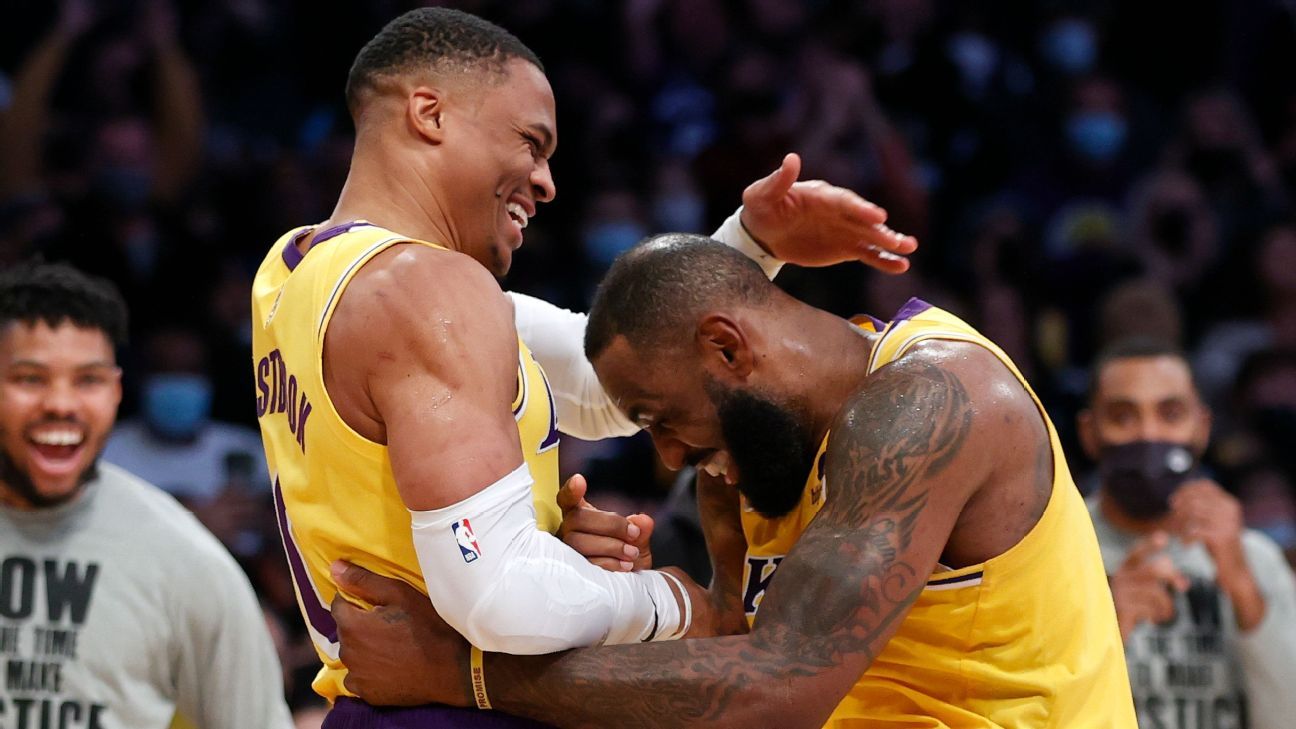 LOS ANGELES — LeBron James apologized to Lakers fans and the next night Los Angeles made the No. 1 offense in the league look sorry in a 101-95 win over the Utah Jazz on Monday.

“I think there’s a huge lesson to be learned with this group that we’re going nowhere without being a great defensive team,” Lakers coach Frank Vogel said after his team held Utah to 36.9% shooting. “Our guys finally locked in, and this is the No. 1 offense in the league by a mile, and we did a great job in all phases.

“When we play like this, we know we can beat anybody. But it hasn’t been consistent enough, and there’s a big lesson to be learned from this game.”

It was a tumultuous 48 hours for the franchise leading into the game. L.A. lost by 37 in Denver on Saturday night, causing Lakers legend Magic Johnson to fire off a derisive tweet about the team’s effort. James, in atypical fashion, skipped out on speaking to reporters after the Nuggets drubbing, instead tweeting out his apology the next night and vowing to improve.

“I didn’t like what was gonna come out of my mouth,” James said after extending his streak to 14 games scoring 25 points or more since Anthony Davis went out with a sprained MCL in his left knee. “So I decided not to speak with you guys.”

James said he had no response to Johnson’s criticism and that his message was aimed solely at the fans.

“Just taking the onus and letting Laker Nation know,” he said. “Wasn’t about anybody; it was about our fans and the people that ride and die with us every single day. Let them know that I got this and it wouldn’t happen again.”

For a night, at least, L.A. showed why Las Vegas bookmakers had the Lakers as a championship favorite heading into the season. Only it wasn’t just stars like James and Russell Westbrook leading the charge.

Stanley Johnson, signed to a second 10-day contract on Monday, scored 10 of his 15 points in the fourth quarter, helping L.A. storm back from a nine-point hole with less than 10 minutes to go in the contest. He repeatedly challenged Utah’s three-time NBA Defensive Player of the Year Rudy Gobert in the paint.

“LeBron’s a smart player. So [when he says], ‘Do this,’ OK, I’ll do it. ‘Do this.’ OK, I’ll do it too,” Johnson said of the game plan. “He saw something. I think if you watch basketball the last couple years, some teams have had success with smaller guys like me attacking [Gobert] off the bounce, and the thing for me is playing with energy.”

It’s one thing for the 6-foot-7 Johnson to go at the 7-foot-1 Gobert, but the 6-foot-3 Westbrook did too. Westbrook threw down a highlight-worthy tomahawk dunk over the Jazz center in the second quarter, earning a technical foul as he let Gobert know about it.

“It gives us some swagger, which we need,” Westbrook, who finished with 15 points, eight rebounds and just two turnovers, said of the dunk. “Especially right now.”

It had been a trying time for L.A., coming into Monday having lost three straight games in which it allowed the opponent to score 125 points or more.

Vogel, whose job security had been questioned at times this season, faced speculation once again.

“Not seeing the results wears on you,” the coach admitted before Monday’s matchup.

Some of that angst was released early in the game when Westbrook grabbed a mop to clean up a spill on the sideline that had caused Utah’s Donovan Mitchell to slip.

“I actually don’t think that was a small occurrence,” Vogel said of Westbrook’s mop duty. “That was an example of, ‘Hey, let’s all let go of whatever we’re feeling from a negative standpoint and the clouds that come with losing and all of that. Let’s let go of that and bring a positive spirit.'”

It’s hard to tell if sunnier skies are ahead for this Lakers team. Davis was evaluated by team doctors on Monday and cleared to ramp up his workouts with on-court contact at the same time Vogel revealed that guard Kendrick Nunn, who has yet to play this season because of a bone bruise in his knee, will be “delayed” in his debut because of how his knee is responding.

Who knows if they’re out of the woods yet.

“I love the way we responded today,” James said. “Wednesday [versus the visiting Indiana Pacers] will be another challenge for us.