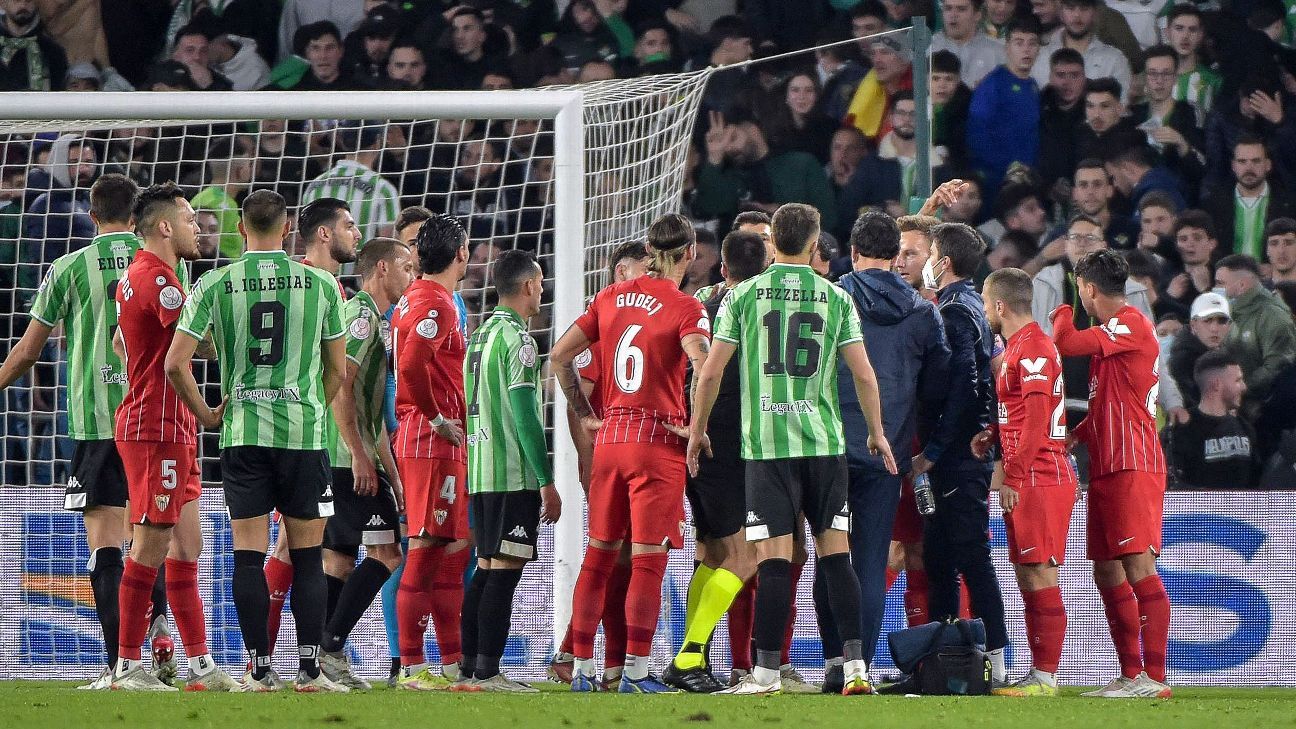 The two leading contenders to win LaLiga had wildly contrasting weekends. Real Madrid elegantly won the Supercopa de Espana, lifting the trophy while Athletic’s captain, Iker Muniain, swallowed the bitter pill of defeat and, equally elegantly, stood by and applauded the victors. (Side note: when Inaki Williams saw his little brother, Nico, wrenching off his runners-up medal as soon as it was around his neck, he chastised his talented sibling, seemingly ordering him to show a little more dignity.)

Barcelona, beaten in the semifinal, sent a tweet of congratulations to Madrid on Sunday night; so did Athletic, the entire event full of grace notes. Meanwhile Sevilla, initially through no fault of their own, became involved in an ugly, debilitating, boorish and exhausting tit-for-tat, two-day confrontation with their cross-town neighbours, Betis, while being knocked out of the Copa Del Rey by los Verdiblancos.

There was aggression, accusations of cheating, mean-spiritedness, boiling tempers and taunting: it was high entertainment for those who like to rubber-neck, but debilitating to be part of. And frankly, if Julen Lopetegui’s players (and the manager himself) mismanage the fallout from Saturday and Sunday, when the city of Seville’s good football reputation was badly besmirched, it could seriously damage their real and vibrant shot at winning a first Liga title since 1946.

The hard facts are simple. Betis were significantly outplaying Sevilla on Saturday afternoon (though the score was 1-1) when an idiotic fan threw a section of a hand-held flagpole towards the pitch and struck Sevilla midfielder Joan Jordan on the top of his head. The Catalan player stumbled and then fell.

At that stage, the mindless fan was the only villain, something (just about the only thing) upon which all of those at both clubs still agree. There has been an arrest following Saturday’s incident, but sadly, that fact — and the way in which the offender is treated and punished — have been totally obscured. Such has been the self-indulgent and mean-spirited fight between the two clubs from that minute onwards. (Monchi, Sevilla’s sporting director, being a notable exception from this war of words.)

The facts continue: Jordan appeared to recover sufficiently so he could deploy a very Mediterranean gesture, tapping his face just below the cheekbone with the tips of his fingers and an open palm, which means “you’ve got some nerve!” or even “you’re a disgrace!” Minutes later, with the thrown object recovered by the referee and handed to the Spanish FA officials, who were governing the game’s procedures, Jordan was in close conversation with his manager, Lopetegui, and then, seated on the pitch being examined, apparently for concussion, by club medics.

As Jordan was escorted down the tunnel stairs, apparently groggy, there was mayhem at the side of the pitch.

Poor old Ricardo De Burgos Bengoetxea had what all referees dread: a situation where everyone was yelling, posturing and demanding clarity while tens of thousands of ultra-excitable fans didn’t know what was happening, except he was required to wait for the Spanish FA disciplinary committee to decide what must happen next. Meanwhile Jordan was sent to hospital for proper examination, the only correct course of action.

Sevilla struck the first note of common sense, releasing a statement that included the phrases “Sevilla FC would like to convey all its affection to Joan Jordán, who fortunately, and this is undoubtedly the only important thing, is at home after being hit by an object thrown from the home stand during the derby.” Joan left the Benito Villamarín in a daze and was taken to hospital, where he was examined (as) required by the protocol due to the concussion. “The final diagnosis is cranio-encephalic trauma and the player will be kept under home observation until a minimum period of 24 hours has passed without any alarming symptoms.”

We live in an age where football is trying to treat such head-knocks suffered by its players with the same seriousness as other, more advanced, contact sports already do. This was exemplary behaviour from Jordan’s club. The match, meanwhile, was postponed until the remainder could be played the following day — without fans. Sevilla protested, as they didn’t want to play the remaining minutes immediately. The Spanish FA rejected their petition.

More facts: Several Betis player immediately ran to social media to suggest that Jordan — allegedly capable of gesturing to the Betis fans one minute, but dizzy and dazed the next — might have been under instructions from Lopetegui to “make the most” of the incident and “act” as if he were unable to continue.

Three of them — defender Juan Miranda, midfielder Victor Camarasa and forward Cristian Tello — directly stated that Sevilla, mainly in the shape of Lopetegui, wanted to manipulate the developing situation to postpone the match, presumably in the hope that some of their absent players would, by then, be available. They claim to have heard Sevilla’s coach encouraging Jordan to “feel more dizzy” and to “sit down on the grass” — words that, if said, could equally have been a coach’s rightful concern with the threat of concussion to his player.

Another fact here is that Sevilla were without some serious players. Bono, Youssef En-Nesyri and Munir are on duty at the African Cup of Nations, while Jesus Navas, Erik Lamela, Suso, Thomas Delaney, Fernando and Marko Dmitrovic are absent with injury and/or illness. (It meant that the 21-year-old third-choice keeper, Alfonso Pastor, was in goal on Saturday, having previously played just one first-team match.) Kounde was only fit to perform in Sunday’s part of the match while, by then, Jordan was of course absent.

This list might add to Betis’ suspicions, but it in no way proves that Sevilla were “up to no good.” Nor should it, under any circumstances, obscure the fact that a mindless fan in the Betis section behind Pastor’s goal caused all of this — absolutely all of it. In the end Betis won, deservedly, but for both Verdiblanco goals — Fekir direct from a corner just before the flagpole was launched at Jordan, and Sergio Canales late in the fan-free restarted match — young Pastor in the Sevilla goal was at fault. The absences of Bono and Dmitrovic ended up being definitive.

If you wanted to find motive behind Sevilla looking to postpone the match for longer than 24 hours, you could. (Lopetegui slammed claims of exaggerating the attack for Sevilla’s gain.) But traditionally, that requires proof, not unproven conspiracy accusations.

When the tie was finally over on Sunday, Andres Guardado added unnecessary spite to the whole affair by celebrating victory with a mock bang on his head with a plastic water bottle, and a dramatic collapse of his own on the pitch, all the while wearing a malicious smile. Mocking the event that had sparked all this nonsense. He claims that wasn’t what he was doing: I don’t believe him.

After the match, neither Betis coach Manuel Pellegrini nor Lopetegui applied sufficient dignity or calm to the heated, angry and accusatory atmosphere that, as Sevilla midfielder Ivan Rakitic pointed out, sent a “bad image around the world.”

Only Monchi stood out. Sevilla’s exemplary sporting director — a man whose blood boils at injustices and who walked away from the club in March 2017 specifically because he said that he cared “too much” to the point that it was beginning to affect his everyday life — is someone capable of entering the fray and defending los Rojiblancos in a bellicose manner. But he chose not to. In fact, not only did he turn the other cheek; he actively encouraged his staff, Sevilla’s fans and media to introduce some “sanity” to the situation.

His exact words: “This is a difficult defeat to digest because it is a derbi in a knockout tournament, but congratulations to Real Betis for going through. These have been 20 complicated hours: too many things have happened. We don’t know what will happen in the Europa League [Editor’s Note: it’s feasible the two sides play each other there, perhaps even in the final that will be in Sevilla’s stadium on May 18] or on Feb. 28, the day of the next derbi: there is time for that. Derbies should be enjoyed and should be an example for the whole world. We now have an historic opportunity to present an image of sanity and normality, and to recover the importance the Sevilla derbi.”

It was dignified and much-needed; it also perhaps it brought temperatures down in the city, too. But there was another, shrewder, side to Monchi’s words.

Sevilla play Valencia at Mestalla on Wednesday. (Stream LIVE, 3 p.m. ET, ESPN+) If they can win they’d go to within two points of Real Madrid at the top the table. For their title challenge it’s utterly essential that they do so.

Yes there are many months, 17 more matches and 51 more points in play, but this is a club not used to winning the league. This is a set-up still learning the ropes of a long, tiring, obstacle-strewn championship campaign.

Habitual title winners get used to coping with tough circumstances: they handle whatever is thrown at them. Sevilla are out of the Champions League and out of the cup. They’re badly depleted in terms of their squad, and are coping with intense interest from Newcastle in signing their defensive leader, Diego Carlos, and there’s mystery surrounding the absence of back-up keeper, Dimitrovic. Is it injury? Is it the coronavirus? A row with the coach? Sevilla won’t say.

If they drag the baggage of fury at Betis and that pain at elimination up the road with them to Valencia; if they are distracted, dispirited, wounded and fail to press the very “reset button” that Monchi was encouraging them to find, then this can go from being a vexatious and “sore” week to a semi-disastrous one. Sevilla don’t need that, Spanish football won’t benefit from that, and LaLiga will be less competitive for it; Monchi knew that very well when he spoke with wisdom and restraint.

What a week this is for Lopetegui and his resentful, wounded but still very capable squad. It’s time to write off all the bile and spleen-venting of the weekend and, to use Alex Ferguson’s tactics, privately tell his 11 angry men that “they’re all against us, we’ll show them, circle the wagons… everyone outside the club’s an enemy … our only option is sheer, naked defiance!” It’s time to surf the anger, turn the tide of “injustice” in their favour.

Can he do it? Will his players show they’re made of the right stuff? Valencia vs. Sevilla on Wednesday is a date with destiny. Don’t miss it.

Woman sues Tyson, says he raped her in 1990s
DU’s Porter, brother of MPJ, arrested in fatal crash
“Not Every Test Batsman Needs To Be A Big Hitter”: Sachin Tendulkar To Cheteshwar Pujara On Birthday
Haas: Pietro Fittipaldi to be reserve driver for fifth consecutive season
India’s Predicted XI vs New Zealand, 3rd ODI: Will Umran Malik And Yuzvendra Chahal Get A Chance?