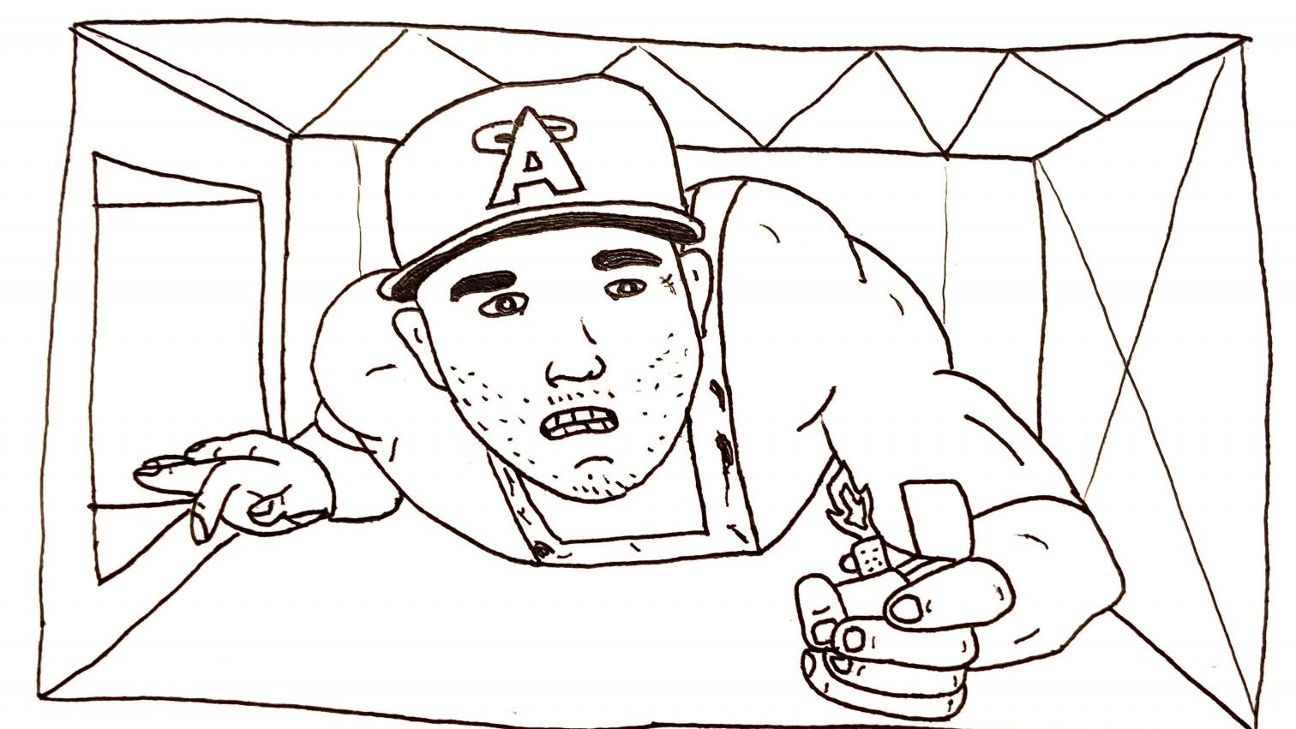 NEW YORK — Three days into the MLB lockout, when New York Yankees fan Ray Sbarra checked Reddit for his baseball fix, he came up empty. So, with the lockout leaving the hot stove freezing cold and no end in sight, he decided to fill in the gap.

Sbarra — whose art training begins and ends with elementary school — picked up pen and paper and started drawing. As best he could, he created a picture of the Los Angeles Angels superstar making a diving catch and posted it on the r/baseball subreddit with the username “DidItForTheStory” and the title “Drawing Mike Trout every day until the lockout is over. Day 1.” Sbarra chose Trout because he wanted to draw the best player in the sport.

Just like that, Sbarra started a mini sensation, a daily series that has drawn between 5,000 and 20,000 upvotes and hundreds of comments daily, giving baseball fans a sliver of joy during a long, uneventful offseason.

Within hours, the drawing shot to the top of the page, with more than 10,000 upvotes and comments like “oh dear god end the lockout”, “Hopefully his art can change the world” and “I hope this is one of the banners outside the stadium next season (if there is a season).”

On the first six days, Sbarra replicated existing photos of Trout on the baseball field, but by the end of the initial week, he wanted to shake things up. Instead of another traditional baseball pose, Sbarra drew the Angels outfielder robbing a home run alongside the rocket from Blue Origin, the space company of Amazon founder Jeff Bezos. On the eighth day, he recreated the cover of the Nirvana album “Nevermind” with Trout substituting in as the baby.

“From there, it was like, what else can Mike Trout do?” Sbarra said. “He could do anything when you’re drawing. Mike Trout can be anywhere, could be anyone.”

He started getting requests, with the top ask being a drawing of Trout as a fish. He complied, sketching up an image of a fish wearing a Trout jersey with a fishing line tied to Trout. In the following days, he’s drawn Trout as Thomas the Tank Engine, as E.T. sitting in the basket of teammate Shohei Ohtani’s bike and as Bruce Willis in “Die Hard” in addition to recreations of famous paintings and other iconic movie moments.

“It’s just really whatever I feel like doing that day,” Sbarra said. “I don’t really have an idea of what it’s going to be until I sit down to draw. I’ll maybe Google a few reference images. Maybe today, I want to reference a famous painting so I’ll Google famous paintings and I’ll see one where I could see Mike Trout in it. There’s endless possibilities.”

As a novice artist, Sbarra is slowly learning techniques and receiving constructive criticism. He spends an hour every day devoted to the drawings and tries to post them between 3 p.m. and 6 p.m. ET. He’s learning how to shade and more accurately scale people in his drawings. The most useful reply was a tip on how to draw the Angels logo, something he struggled with in his early drawings. In front of his daily audience on r/baseball, Sbarra wants to keep getting better at drawing.

“It’s really strange,” Sbarra said. “I also think everyone’s having a fun time with it, and that’s what makes it fun for me. I feel like I’m starting to develop a style.”

What has kept him going is seeing the positive feedback he receives, with people posting pictures that their kids have drawn inspired by his art journey. None of the people in Sbarra’s life know about this project — he’d hoped to keep his name hidden for as long as possible because he did not want to overthink the drawings.

“I didn’t want to put pressure on me to either keep going or not keep going,” Sbarra said. “I just felt like if I could just do this without any input from anybody around me, I would be able to get it done. But now, you know, it’s out there now. We’ll keep going. We’re not stopping.”

Sbarra also hopes that drawing Trout can help spread his love and joy for baseball.

“I’ve seen a lot of people post about how they didn’t know who Mike Trout was because they only casually followed baseball, which I think is a travesty,” Sbarra said. “If you don’t follow basketball, you know LeBron. You don’t follow golf, you know Tiger Woods. More people should know who he is. A lot of people said they’re going to check them out. At least a few new baseball fans, hopefully.”

Sbarra said he is currently thinking about starting an online store to sell prints and t-shirts to raise money for charity, sending a percentage of proceeds to the American Foundation for Suicide Prevention, a charity that Trout publicly supports, and the Center for Asian American media for any drawings that also feature Ohtani. A league source told ESPN that Trout is aware of the ongoing art series, but Trout did not respond to a request for comment.

This hobby-turned-Reddit-sensation started because Sbarra wanted more baseball in his life, but he hopes the project ends sooner than later so he can go back to following the sport he loves.

“I hope [Trout] doesn’t think it’s weird,” Sbarra said. “I hope he likes it. I will be entertained if he has seen them. You know, I just hope to see him play a full season.”