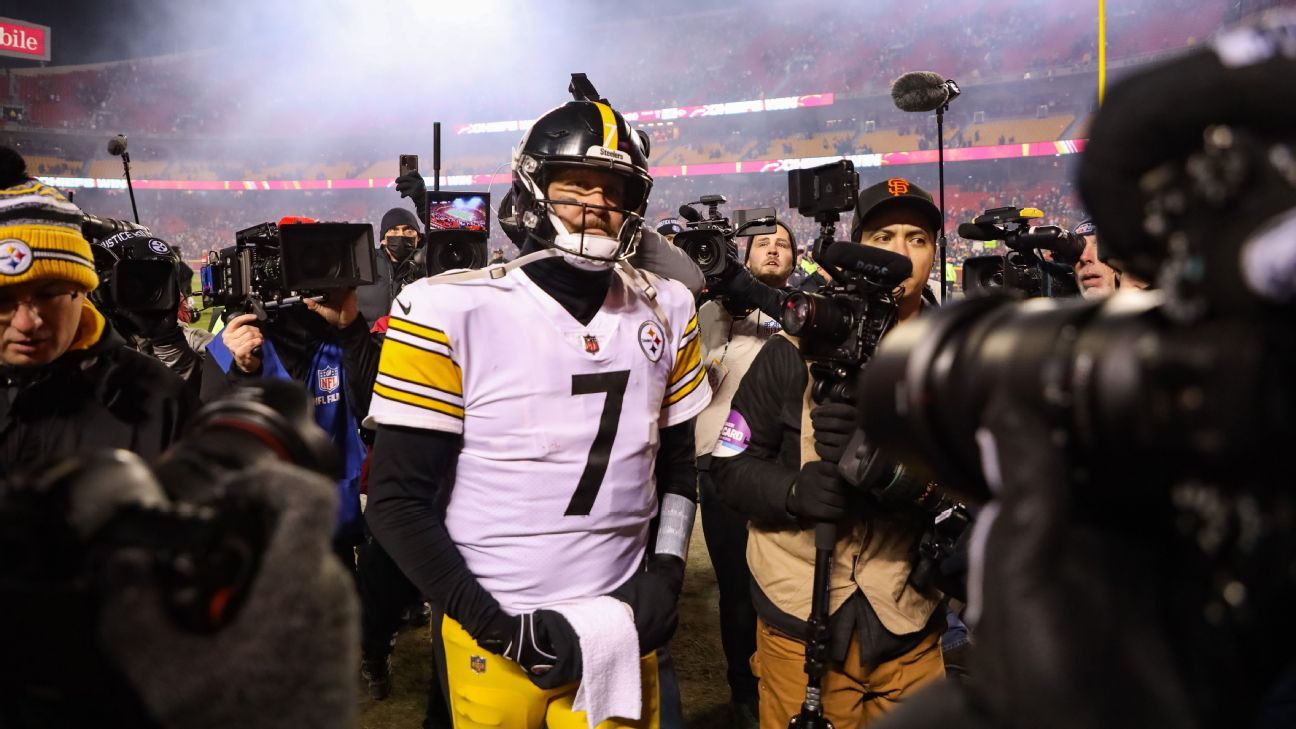 KANSAS CITY, Mo. — Steelers quarterback Ben Roethlisberger didn’t use the word “retirement” following Pittsburgh’s season-ending 42-21 playoff loss to the Kansas City Chiefs but called his 18-year career with the franchise “an honor” and said he’s “looking forward” to the next chapter.

Roethlisberger and the Steelers didn’t get the happy ending they had hoped for to cap his 18-year career during Sunday night’s AFC wild-card showdown at Arrowhead Stadium, one in which he finished 29-of-44 passing for 215 yards and two second-half touchdowns after the game had long been decided.

Afterward, most involved acted, and spoke, as if they had seen Roethlisberger play for the final time for the only team whose uniform he has worn in his NFL career.

“Man he was [No.] 7, it’s been an honor and a pleasure, man,” Steelers coach Mike Tomlin said.

Describing his emotions coming out of the game and walking off the field, Roethlisberger said, “Yeah it’s tough, but I’m proud to play with these guys. God has blessed me with an ability to throw a football and has blessed me to play in the greatest city, in Pittsburgh with the greatest fans and the greatest football team and players. And it has just been truly a blessing, and I’m so thankful to Him for the opportunity that He’s given me.

“Just a bunch of guys that fought for each other, that fought their butts off and just competed. It wasn’t always pretty, but there are a lot of games that we found a way. I’m so proud of this group of men and the way they fight for each other, for the black and gold, for our fans. It’s just been an honor to play with them.”

Just after the clock wound down to 0:00, Roethlisberger shared a moment on the field with Chiefs quarterback Patrick Mahomes, who finished the night with 404 yards and five touchdowns.

“Such a good football player,” Roethlisberger said. “[Just a] lot of respect. [He] said he’s got to get a jersey, and I said ‘I need one, too.'”

Likewise, Mahomes described Roethlisberger as “a tremendous player that I have a ton of respect for — the way he plays the game, the competitor that he is.

“He’s won Super Bowls. He’s a guy that I’ve watched growing up and I have a ton of respect for him. That’s what I told him, that if this is his last game, he did it the right way.”

Sunday night was an uphill affair for the Steelers as a whole, but particularly for Roethlisberger. Going into the game, the quarterback had publicly hoped the underdog Steelers could “go in and play and have fun.”

But Roethlisberger was 0-for-3 passing over the Steelers’ first two possessions, 3-of-8 passing by the end of the first quarter and 5-of-14 for just 24 yards at halftime — by which point the Chiefs had already built a 21-7 lead.

Toss in a couple drops from wide receivers and a largely ineffective run game, and the Steelers punted seven times in the first half alone.

“I don’t think any of us played well early, for whatever reason … we didn’t make the plays we had to early to give ourselves a chance,” Roethlisberger said.

Pittsburgh did not score a touchdown on offense — a 13-yard scoring pass from Roethlisberger to Diontae Johnson — until there was 4:10 remaining in the third quarter to make it a 35-14 game, a rather anticlimactic closing act on his decorated career.

The Steelers’ only score before the third quarter had been a 26-yard fumble return by outside linebacker T.J. Watt that had briefly given them a 7-0 lead in the second quarter.

“No. 7, man, the way he’s battled, the way he’s always given us a chance, when you talk about having toughness as a quarterback, when you talk about a guy who is going to give you everything he’s got, you can’t ask for more than that,” Steelers defensive tackle Cam Heyward said. “Ever since I got here … we had a guy who gave us a chance, when we started a season you said that’s a Super Bowl-winning quarterback. There’s not a lot of quarterbacks who can do what he does.”

Roethlisberger has played in 249 regular-season games for the Steelers in his 18-year career, and Sunday night marked his 23rd postseason start for the team.

Roethlisberger, who will turn 40 on March 2, has not formally announced his retirement from the league but had hinted as much even before the Steelers’ final home game of the regular season in Week 17 when he said “all signs are pointing to this could be it.” He also did a lap around Heinz Field thanking fans after Pittsburgh’s 26-14 win over the Cleveland Browns.

On Sunday, a throaty contingent of Steelers fans made the pilgrimage to Arrowhead, perched behind the Steelers bench with “thank you, Ben” and “thank you, No. 7” signs from two hours before kickoff until the final second of a disappointing night had ticked off the clock. One group had four large, truck-tire-sized photos of Roethlisberger’s head they held up at various times during the game.

“I’ve been here a long time, and it’s been a lot of fun,” Roethlisberger said when asked Sunday what impact he has had on the franchise. “We joke a lot about the Browns and going there, but it was meant to be that I was going to wear black and gold.

“Draft day, I had a black suit on with a gold tie. I’m just so thankful. I hope that I’m able to pass the legacy of what it is to be a Steeler from Dan Rooney. We all miss him, anyone who knew him misses him and so, it’s just, hopefully I could pass some of that on to the guys and continue the tradition of what it means to be a Steeler.”

He added, “I gave Cam [Heyward] a big hug and told him it’s on him now … teaching and holding guys to the Pittsburgh standard.”

Roethlisberger said his immediate future would likely include “tubing and sledding” in the snow with his children Monday, and that not playing anymore would “probably really hit me come training camp time.”

“As we move from one chapter to the next, it’s gonna be different but it’s gonna be fun and a new challenge and I’m looking forward to it,” Roethlisberger said

He will end his career among the game’s elite at the position, in the top 10 of nearly every major passing category to go with two Super Bowl wins as well as six Pro Bowl selections in a career in which the AFC also included the likes of Peyton Manning and Tom Brady much of the time.

“When he goes no huddle … when he’s playing backyard football, he’s unbelievable,” Steelers wide receiver JuJu Smith-Schuster said. “That right there, you can’t make it up … the touch, throws, the timing, he has all that.”