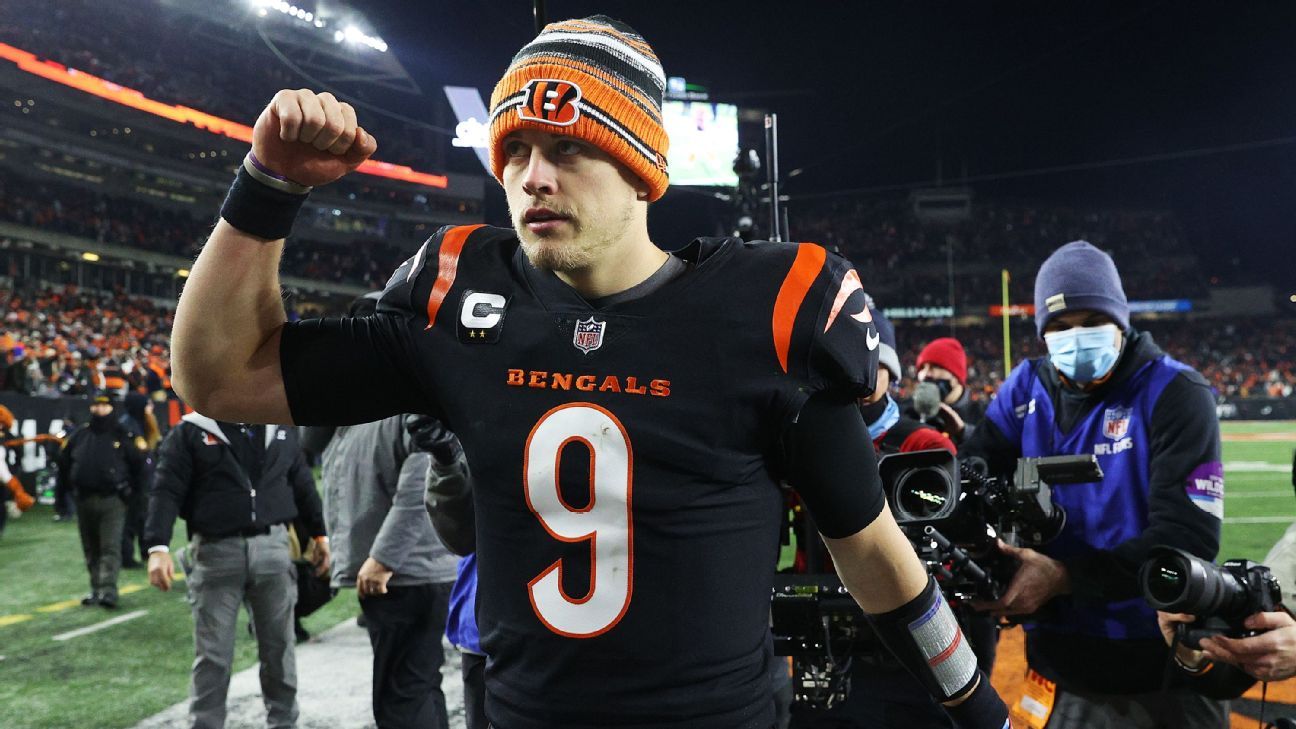 CINCINNATI — When you find your quarterback, things become possible that weren’t.

The Cincinnati Bengals won a playoff game Saturday. It had been 31 years and nine days since the last time that happened. Only four players on the Bengals’ current roster were even alive yet. There was, at that time, no such thing as a text message. The team they beat to win that game was called the Houston Oilers, and yes, young readers, they do still exist but they’re now called the Tennessee Titans. The Bengals lost the following week to the Los Angeles Raiders, who are now the Las Vegas Raiders and, somewhat poetically, the team the Bengals beat 26-19 Saturday.

That game took place almost six years before the birth of Joseph Lee Burrow, who arrived in Cincinnati via the No. 1 pick in the 2020 draft, tore his ACL in his rookie season and came back to lead the Bengals to (at least!) the divisional round of the playoffs in his second.

This wasn’t supposed to happen here — not this soon, at least. Good things don’t usually happen to the Bengals, and even if you came into this season liking the young roster they were putting together, you wouldn’t have picked them to be one of the final eight teams left in the 2021 playoffs. But Cincinnati has its quarterback, which means things are possible that weren’t before.

“We’ve got all the faith in the world in Joe, so there’s never any panic on our end,” Bengals coach Zac Taylor said. “Had they been down seven at the end of the game and scored there to tie it, and then we’d have had to kick a field goal to win it, I promise you my heart rate would have been as easy as could be because we trust our players and someone is going to step up and win that game for us. I wasn’t surprised when it happened.”

What’s the impact of someone like Burrow? Well, there were six NFL head coaches fired last week, and Taylor was not among them. Joe Judge of the Giants was. Brian Flores of the Dolphins was. Vic Fangio of the Broncos and David Culley of the Texans were among the fired as well. What do those situations all have in common? Those organizations still don’t know who is their long-term answer at quarterback. The Bears might know — they drafted Justin Fields in the first round last April and have high hopes — but the inability to get consistent production out of the quarterback position during his tenure in Chicago is a big part of the reason Matt Nagy got fired.

Taylor entered this season on shaky ground. He was 6-25-1 during his first two seasons as Bengals coach. With all of the promise this roster had, another two-win or four-win season might — might — have prompted team ownership to move on from him. Taylor said Saturday night that, if he’d been working in any other organization, he likely wouldn’t even have made it to Year 3. And he may be right. (His predecessor lasted 16 years without winning a playoff game, after all.) But it sure didn’t hurt that he had Burrow coming back, and all of the confidence and hope and positivity that come with him. Burrow is the kind of player who makes people money. Taylor and his coaching staff entered this season on thin ice. Now, offensive coordinator Brian Callahan is on the Broncos’ head-coach interview list, and they’re all probably going to get contract extensions.

“Joe’s a great leader,” Bengals wide receiver Tyler Boyd said. “He came in here with confidence, knowing his ability to come into the league and flourish right away. He embraced that role. And as long as a guy like him comes in and works hard and plays with a chip on his shoulder like the rest of us do, guys are going to fall in behind him. And that’s what happened.”

It didn’t hurt that, with the No. 5 pick in this year’s draft, the Bengals drafted Ja’Marr Chase, who caught 84 passes for 1,780 yards and 20 touchdowns from Burrow two years ago as they helped lead LSU to a national championship together. Their connection was on brilliant display as Chase set rookie records and propelled the Bengals to their first postseason in six years. There was a point Saturday where it looked as if Burrow wasn’t going to throw the ball to anyone else all night. Chase ended the game with nine catches for 116 yards. Burrow’s two touchdown passes went to Boyd and tight end C.J. Uzomah. There were no hard feelings.

“We started clicking in college,” Chase said. “We have been helping each other get smarter every week and better as the game goes on.”

Thing is, the Bengals didn’t really play all that great Saturday. Five times, they ventured into the red zone against a Raiders defense that allowed touchdowns on more than 81% of opponents’ red zone possessions in the regular season. Three of those times, they came away with field goals. They clung to a seven-point lead in the final minute with Derek Carr leading the Raiders on what looked for all the world like a game-tying touchdown drive against a Cincinnati defense that had been hit hard by injuries during the game.

The largest football crowd in the history of Paul Brown Stadium was all out of fingernails to chew by the time Germaine Pratt intercepted Carr at the goal line on fourth down with 12 seconds left. By the time Burrow took the field for the final knee-down, no one even knew what to do. Dozens of SWAT team members with scary-looking guns formed a ring around the field in case fans decided to charge it. That’s not really a thing in the NFL, and it didn’t happen Saturday, but give Cincinnati a break. Thirty-one years is really a long time. This is a fan base with a lot of scars. It’s not ridiculous to think they might not know how to handle success.

“Never in my lifetime have we had a playoff win” defensive end Sam Hubbard said. “I feel like we broke a curse. Really, just looking up in the stands, seeing the city come alive, it’s hard to put into words what it means to everybody in the city, and I’m just really happy to be part of the team that was able to do it. We got a lot more in store.”

It’s time for Bengals fans to recalibrate their expectations. Burrow is the real deal — a fearless player, built for the big moment and determined to keep getting greater. At some point during his rookie season, he decided he was going to need to improve his arm strength to succeed in the NFL, so he and his coaches came up with an offseason plan for how to do that. When he tore his ACL last November, it might have been easy to scrap that plan and focus exclusively on the knee rehab. Burrow decided instead to do both, and he returned this year with improved arm strength.

“There’s definitely more velocity on his ball, and that’s something he emphasized,” Callahan said last week. “He had a program with his strength training, his body mechanics, and as a result he’s been able to throw a little bit faster, a little bit tighter, a little bit farther than a year ago.”

That’s the kind of stuff that makes good players great and helps great players stay great for a long time. The knowledge that there’s always room for improvement and the determination to pursue it. When you draft a quarterback No. 1 overall, you’re hoping he has the kind of stuff inside of him that Burrow has already shown.

“I mean, it’s exciting,” Burrow said of his first career playoff win. “But this was expected. This isn’t like the icing on top of the cake or anything — this is the cake. So we’re moving on.”

Yes, there’s another Bengals playoff game next week, in Tennessee or in Buffalo, and this time they won’t be the betting favorite. But they won’t be a pushover, either. This is a team that beat the Kansas City Chiefs here a couple of weeks ago to clinch the division title. The Bengals went toe-to-toe with the Green Bay Packers in early October and would have won that game too if their otherwise-spectacular rookie kicker had been able to make a field goal that day. They went 2-0 against the Steelers and 2-0 against the Ravens, dominating two division rivals who have used them as punching bags over the years. The Bengals fear no one, and they do not believe this is as far as they can go.

“It used to be, people would laugh when they saw us on the schedule,” Bengals running back Joe Mixon said last week. “Like, ‘Aw, we’re fixin’ to play the Bengals. It’s just a stat week.’ But nobody’s laughing no more.”

There are a lot of reasons for that. Mixon is one. Edge rushers Hubbard and Trey Hendrickson, safety Jessie Bates, Chase, Boyd and Tee Higgins. All big reasons why the Bengals are where they are. But the main reason is the kid they pick first overall in the 2020 draft. Because in Joe Burrow, the Bengals appear to have found that rarest and dearest of NFL commodities — a true franchise quarterback. And when you find that, anything becomes possible.

Which of the world’s top strikers have scored more goals in a game than Mbappe’s five?
Bellator re-signs Nemkov to multiyear contract
Source: Chiefs’ Mahomes has high ankle sprain
Sources: Ex-Canes QB Garcia commits to Mizzou
Is anyone getting into the Hall of Fame? Everything you need to know on ballot reveal day