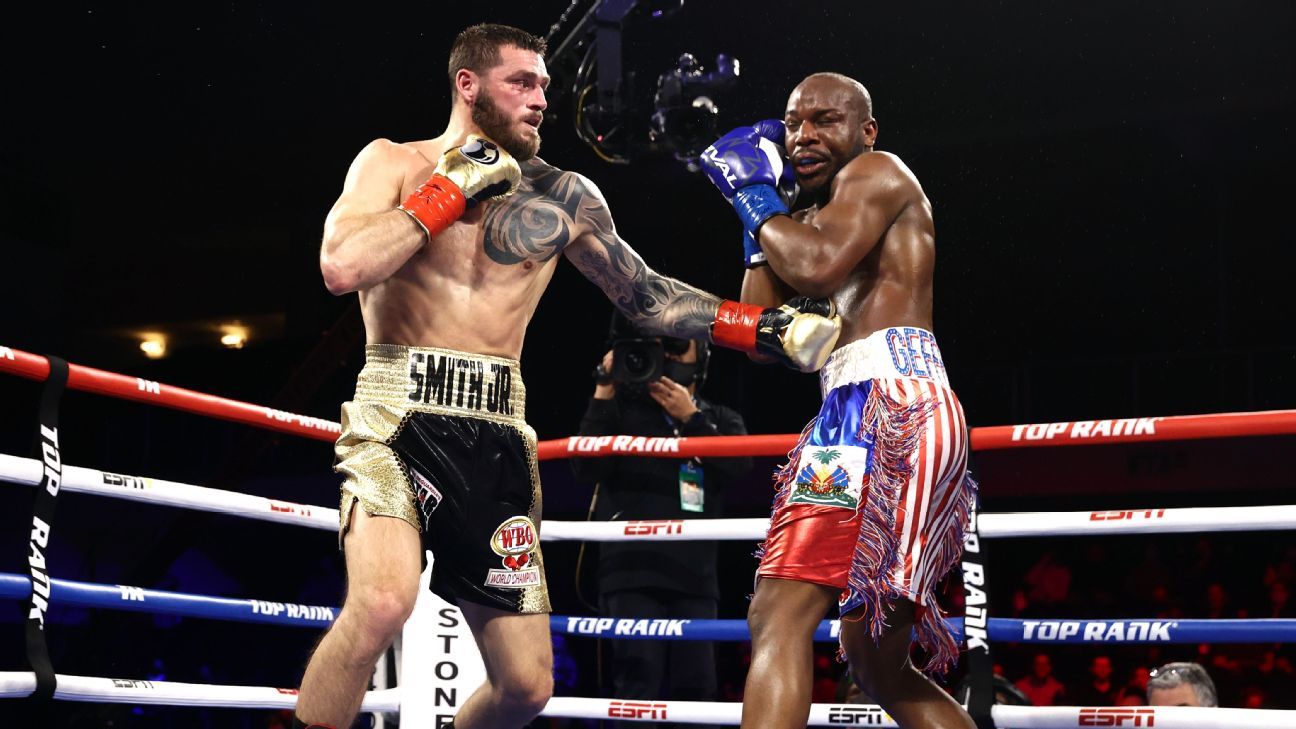 Joe Smith Jr. made the first defense of his WBO light heavyweight title with a ninth-round TKO of Steven Geffrard on Saturday in Verona, New York.

The 32-year-old champion out-landed the challenger 233-81 and connected on 59.1% of his power shots, per CompuBox.

“He really brought it today; it was a great fight,” said Smith, ESPN’s No. 4 light heavyweight. “He’s … a good survivor. I was trying to get him out of there early, but I realized he was very tough and I wasn’t going to be able to do that.

“I tried to wait until the later rounds and started throwing more combinations to pick him apart.”

He did just that and unloaded almost 700 punches in the less than nine full rounds.

The Long Island, New York-born Smith finally hurt Geffrard in Round 5 and continued to dish out punishment for the remainder of the bout.

The 31-year-old from Miami accepted the fight on eight days’ notice after Callum Johnson withdrew because of a positive COVID-19 result. It was the third time Smith had a fight impacted by COVID-19 in the past year.

Smith was set to vie for a vacant 175-pound title against Maxim Vlasov in February 2021 before Vlasov tested positive. The bout was rescheduled for April, and Smith prevailed via majority decision.

Smith’s first defense was set for October against Umar Salamov, but then Smith contracted COVID. He was hospitalized after getting the virus.

Now recovered and with his first defense out of the way, Smith said he hopes to meet unified 175-pound champion Artur Beterbiev later this year.

“I want to get back in the gym, work on my craft, and like I say each and every time I get in the ring, I’m going to get better and better,” Smith said. “I believe the next time you see me, I’ll be ready for anybody.”

Pereira-Adesanya, Masvidal-Burns set at UFC 287
Miami dismisses Gattis as OC after one season
Quinn returning to Cowboys after HC interviews
Ex-Badger Randle El found guilty in ’20 homicides
“Will Nag Me For Rest Of My Life”: Australia Star On Missing India Tests