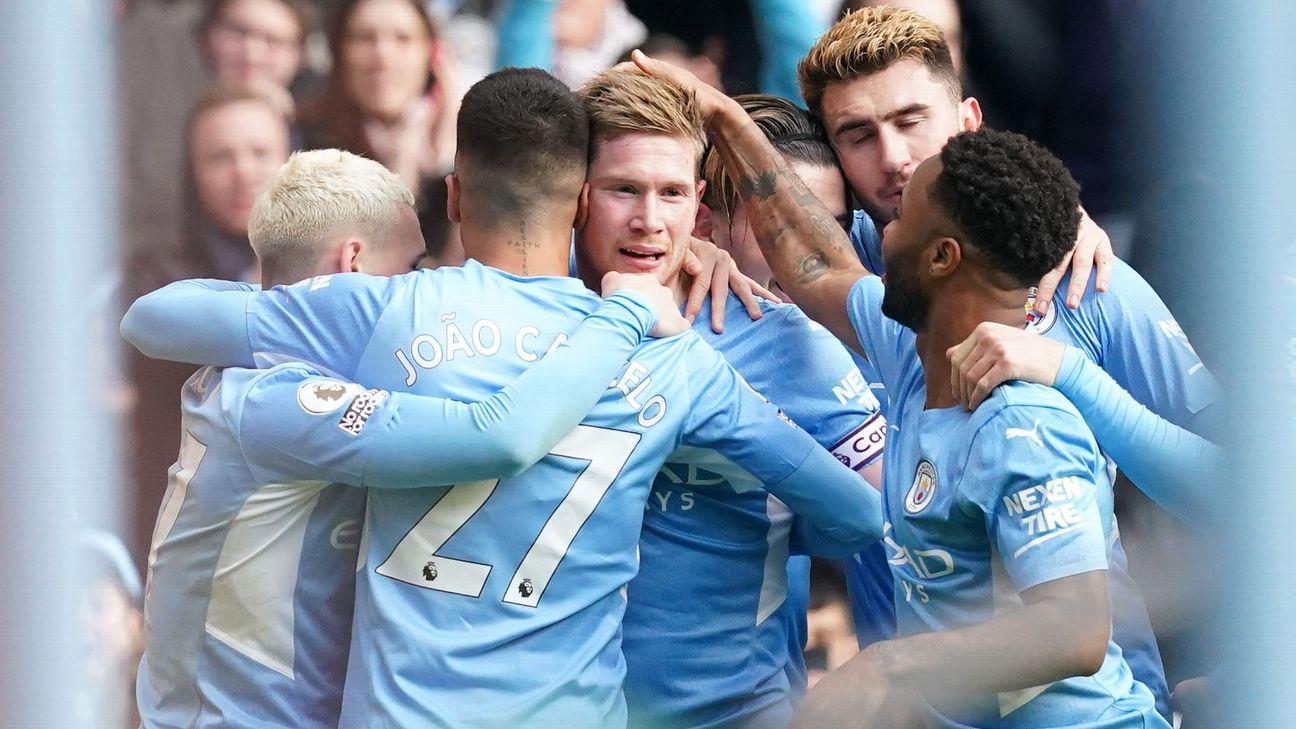 MANCHESTER, England — It was a goal worthy of winning the Premier League title, even if it is only January and there are still four months of the season to play. But with Kevin De Bruyne‘s stunning 70th-minute goal sealing Manchester City‘s 1-0 win against Chelsea, the reality is that the title race has been settled by a player who, in a league of big-money signings, is absolutely priceless.

After this first-versus-second clash, City now sit 13 points clear of Thomas Tuchel’s Chelsea following a 12th successive league win. Third-place Liverpool are 14 points behind City with two games in hand, but even if they win those, it is difficult to imagine Jurgen Klopp’s team going on to overturn an eight-point deficit to win the title.

Forget those who will say that “anything can happen” in the final months of the season. City are cruising to a fourth Premier League title in five seasons and De Bruyne’s goal, when he broke clear of N’Golo Kante‘s challenge and burst forward before curling a right-foot shot beyond Kepa Arrizabalaga from 25 yards, was like a chef’s kiss for confirmation.

“I didn’t see any pass but then I saw a little gap between the defenders to bend it around them, and it worked,” De Bruyne said, with some understatement.

You can toss a coin to settle debate as to whether De Bruyne or Liverpool’s Mohamed Salah is the best player in the Premier League. Both are incredibly influential on the fortunes of their team, but De Bruyne arguably flies under the radar more than Salah and sometimes doesn’t receive the credit his remarkable consistency deserves.

But it is worth putting De Bruyne’s value to City in another context.

This was a game in which the record signings of both clubs — City’s Jack Grealish and Chelsea’s Romelu Lukaku — continued to struggle to justify their huge transfer fees and contracts. Grealish has flattered to deceive since his £100 million arrival from Aston Villa last summer, while Lukaku’s difficulties at Chelsea since his £97.5 million return from Inter Milan have been well documented and publicised by the player himself, who has spoken publicly about his unhappiness at the role he has been asked to play by Tuchel.

Throughout this game, both Grealish and Lukaku looked like square pegs trying to fit into round holes.

Grealish, accustomed to having every attacking move funnelled through him at Villa, is struggling to accept that he is one of seven or eight options at City and his influence has diminished as a consequence.

The England winger wasted a good chance to score in the first half and won just one significant free kick in the second. He has scored just three goals in all competitions this season, so it is fair say that he is not providing too much value for money at the Etihad.

Lukaku is similar to Grealish in that he has fallen well short of expectations at Stamford Bridge, managing just five Premier League goals having been signed with the belief that he would end the campaign with at least 20. Tuchel uses him centrally, when he is perhaps most effective cutting in from the right, but despite this, Lukaku still fails to punch his weight and cause opponents the problems a striker of his pedigree should.

In one first-half chance, Lukaku broke clear of John Stones and bore down on goal, but when it seemed clear he would shoot, he instead passed to Hakim Ziyech and the move fizzled out. He also missed a second-half chance when he tried to beat Ederson with a first-time shot from 20 yards.

Lukaku spends too much time in the central channel, failing to move cleverly enough to drag his defender out of position, and his constant arm-raising when he doesn’t receive a pass is likely to irritate his teammates and his manager.

Considering the value of their contracts, City and Chelsea are going to be stuck with Grealish and Lukaku, regardless of whether they improve. The difference between the two, however, is that City have De Bruyne to keep the focus away from Grealish and Chelsea don’t. Lukaku doesn’t have the luxury of a brilliant teammate who can get him and his team out of a hole with a piece of magic, as De Bruyne did in this game.

When he signed from VfL Wolfsburg in a £55m transfer in 2015, De Bruyne was by no means a low-budget signing. It was a big fee, but he has since gone on to make it seem like a bargain.

If Grealish’s transfer was worth £100m and Lukaku a few million less, how much would it take to sign De Bruyne in today’s market?

“We have won what we have done together, and now I want to push him more, he is a world-class player, he has humility, is humble,” Guardiola said when asked about De Bruyne. “He has won Premier Leagues and a lot of prizes, but I want more, because I know he can do it. He has everything.”

City know that he is priceless. De Bruyne is a player that simply cannot be given a transfer value.