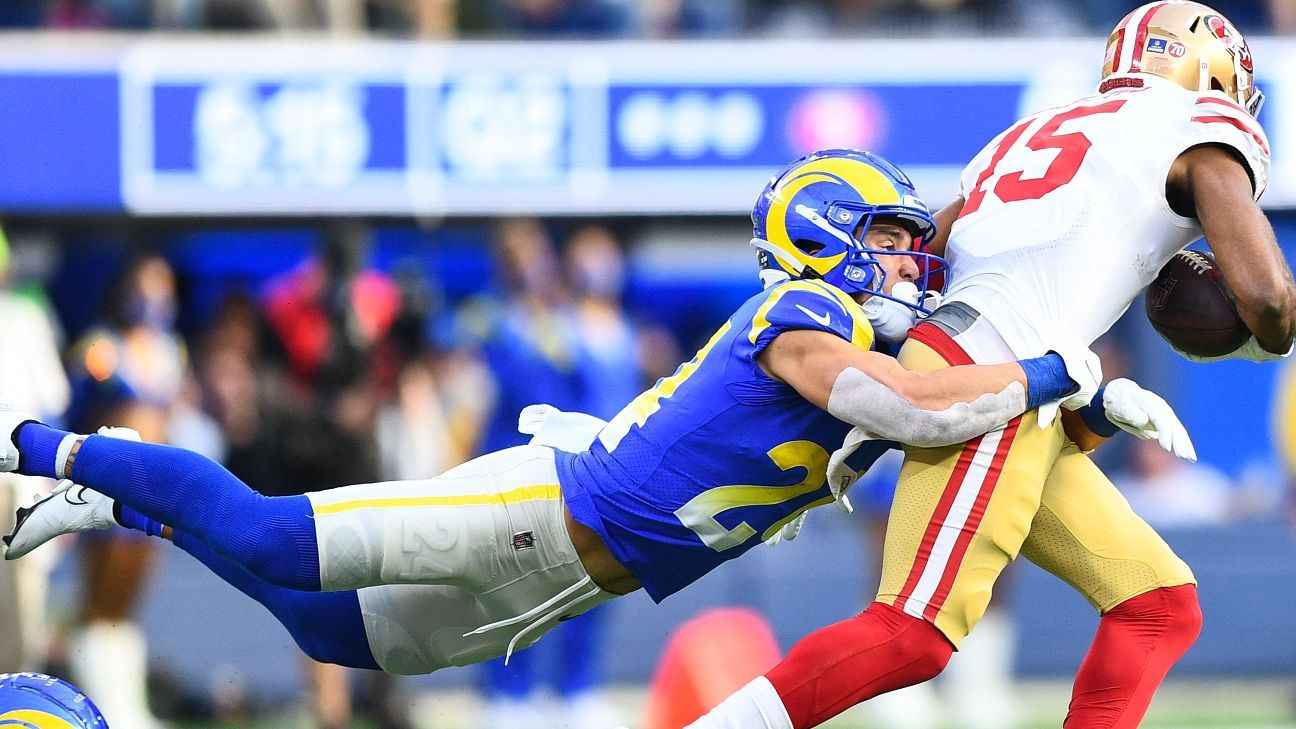 Los Angeles Rams free safety Taylor Rapp did not clear concussion protocol this week and has been ruled out for Monday night’s wild-card playoff game against the visiting Arizona Cardinals.

Rapp suffered a concussion in the Rams’ overtime loss to the San Francisco 49ers on Sunday. They also lost strong safety Jordan Fuller to a season-ending ankle injury in that game, meaning they’ll be without both starting safeties.

The team lists backup running back Buddy Howell (hamstring) as doubtful. Receiver Van Jefferson (shoulder) is listed as questionable, but coach Sean McVay expects him to play and said everyone else should be available.

McVay called Rapp’s absence a “big loss” and added that “he’s doing everything in his power to get back as quickly as possible.”

Fuller (113) and Rapp (94) were the Rams’ top two tacklers this season while playing 16 and 17 games, respectively. Rapp shared the team lead in interceptions (four) with cornerback Jalen Ramsey. Their injuries led the team to sign Eric Weddle to their practice squad this week, bringing the 37-year-old safety out of his two-year retirement.

McVay confirmed that Weddle will be added to the active roster for Monday night’s game and will contribute in a to-be-determined role. The Rams also have Nick Scott and Terrell Burgess at safety.

Weddle, a six-time Pro Bowl selection, retired after spending the 2019 season with the Rams. Monday will mark 750 days since his last NFL game.

“He’s done a great job,” McVay said. “He’s brought a great energy. He’s a great communicator. He’s a great leader. He’ll be ready to go. What exactly that role looks like, we’re still working through. Got a lot of confidence in Nick Scott and Terrell Burgess as well.”

McVay said there’s “a lot of ranges” to how much Weddle might play against Arizona before reiterating his confidence in Scott and Burgess.

“But I do know as a competitor when he’s out there, if he’s going and he gets into the flow, he’s gonna want to go,” McVay said. “If he’s feeling good and there’s no risk and we’re in a good flow, we’ll kind of just take it a snap at a time. I think it’s hard for me to realistically put a parameter around it because this is something that’s never been done before. It could be 10; it could be 30. I think in a lot of instances too, it depends on what kind of personnel groupings we’re presenting to the Cardinals’ offense as well.”

Fuller, a captain, was the Rams’ defensive signal-caller. McVay said it’s likely that linebacker Troy Reeder will take over those duties.

Quarterback Matthew Stafford, who had his toe landed on against the 49ers, was listed as a full participant in all three practices this week.