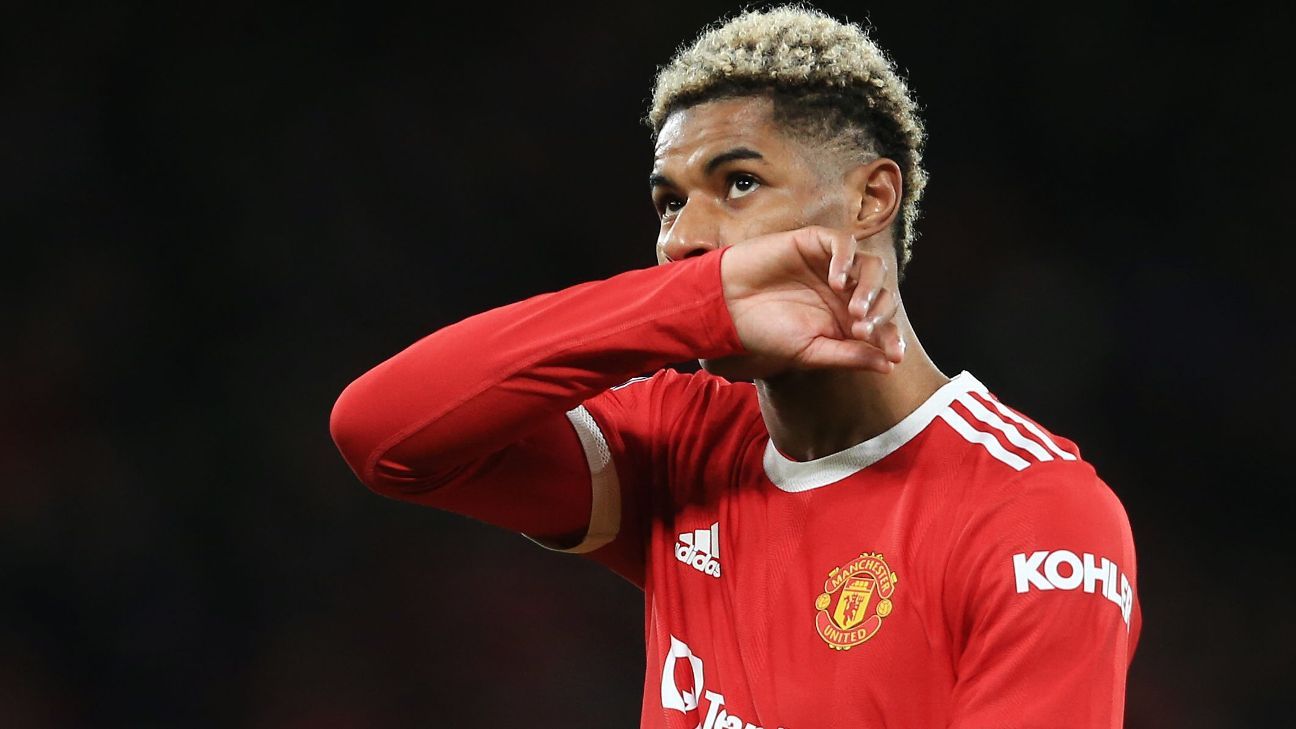 It’s not often that Manchester United fans voice their dissatisfaction with one of their own, but during Monday’s FA Cup third-round tie with Aston Villa (stream a replay on ESPN+, U.S. only), they did.

Mason Greenwood probably should have squared a pass to Marcus Rashford as he sprinted towards goalkeeper Emiliano Martinez, but having decided to shoot, the ball rebounded off the goalkeeper and back into the penalty area. The deflection caused enough confusion that Tyrone Mings collided with Martinez as he tried to tidy up the mess, but there was no need to panic. Instead of trying to pinch the loose ball, Rashford stopped in his tracks, instead gesturing to Greenwood that he’d chosen the wrong option. The United supporters behind the goal didn’t like it, and their angry, collective groan lasted until well after Martinez had recovered possession, taken a moment and then rolled out the ball to one of his teammates.

Rashford, out of sorts all night, was substituted soon afterwards and when his number went up on the touchline, there were scattered cheers before other supporters tried to drown it out.

Inconsistent results, shaky performances and talk of dressing room unrest has made Old Trafford a volatile place at the moment and on Monday night, the vitriol was directed at Rashford. Afterwards, United’s interim manager Ralf Rangnick defended the striker, insisting he is “trying hard” and “as long as he is training well, I don’t see much of a problem.”

Rashford, though, accepts he is not playing well, with those closest to him putting it down to a “crisis of confidence.” Rangnick says he just needs a goal, having been without one since late October — the second-longest goal drought of his career — but there are concerns among some Carrington staff it’s becoming something more than that. For now, though, it remains a blip.

Sources have told ESPN that Rangnick will monitor training before deciding whether or not to take Rashford out of the spotlight for the league meeting with Aston Villa at Villa Park on Saturday, but with Cristiano Ronaldo and Jadon Sancho recovering from niggling injuries, the interim coach may have no choice but to throw him back in.

Rashford, as always, is keen to play, though for some in his inner circle that’s part of the problem.

Ole Gunnar Solskjaer refused to rotate the United team for much of his time in charge and, as a result, Rashford estimates he played for more than two years while carrying at least one injury. Since 2016, he has averaged 59 games a season. He was poor in the Europa League final defeat to Villarreal in May, but in mitigation, he could barely get his boot on before kickoff because of a swollen ankle.

Rashford also accepts, in hindsight, that maybe he shouldn’t have been part of the England squad at Euro 2020 last summer, deciding ultimately to accept Gareth Southgate’s callup because of his desperation to help in any way he could. He was used sparingly as a substitute and missed a penalty in the shootout defeat to Italy, the mental effects of which are still being felt. A number of former England internationals have been in touch to help Rashford deal with the fallout, which included racist abuse on social media that was also aimed at Sancho and Arsenal‘s Bukayo Saka.

Now 24, Rashford is growing to learn that mental well-being is as important to his performances as anything he does on the training pitch. So, too, is a settled home life. He has a tight support network, which includes his mother Melanie, brothers Dane and Dwaine and two close childhood friends, although a recent separation from long-term partner Lucy has been keenly felt. He can sometimes appear to be quite sullen, even with people he knows well — “don’t ever get in the way of his sleep,” one joked — and can sometimes look like he’s carrying the weight of the world on his shoulders.

His work to fight food poverty in the UK has raised questions, from inside and outside the club, about whether his focus has been shifted by off-field commitments, but it’s something that is vehemently rejected by those around him. Rashford’s campaigning and commercial work is carefully managed, and he’s been so keen to draw a line between the two that he requests interviews conducted at Carrington focus only on football.

Rashford’s dedication has certainly not been questioned by the club’s medical staff, who oversaw his recovery from a shoulder operation in August. At the time, he didn’t have gym equipment at his home in Cheshire, so he would report to training at 7 a.m. every day and stay until early evening. Sources have told ESPN that work to build up his fitness is ongoing.

Despite Rashford’s dip in form, senior sources at Old Trafford say he is “absolutely key” to the club and hope to open contract talks before the end of the season. But with a deal running through 2023 and the option of another year, sources have told ESPN he will not be in a rush to sign.

A United fan who has been at the club since the age of seven, Rashford is desperate to be successful at Old Trafford, but he also remains ambitious to collect top trophies. He was on Paris Saint-Germain‘s list of possible replacements for Kylian Mbappe in the summer and in the past has been mentioned as a target for both Barcelona and Real Madrid. Mauricio Pochettino and Pep Guardiola are big fans of the striker, and sources have told ESPN that Rashford would not be unhappy if Pochettino was named as United’s next permanent manager. He is one of the names on a five-man short list.

For now, though, it will fall on Rangnick to find a way of getting Rashford back to his best. He would like to play regularly on the left side of a front three, but it’s a position that has not always existed in the German’s system since he arrived at United in December. Wherever he plays against Villa on Saturday, a goal would go a long way to quietening the noise around his form. It would also ensure that the next time he walks out at Old Trafford, the cheers are because he’s playing rather than because he’s not.