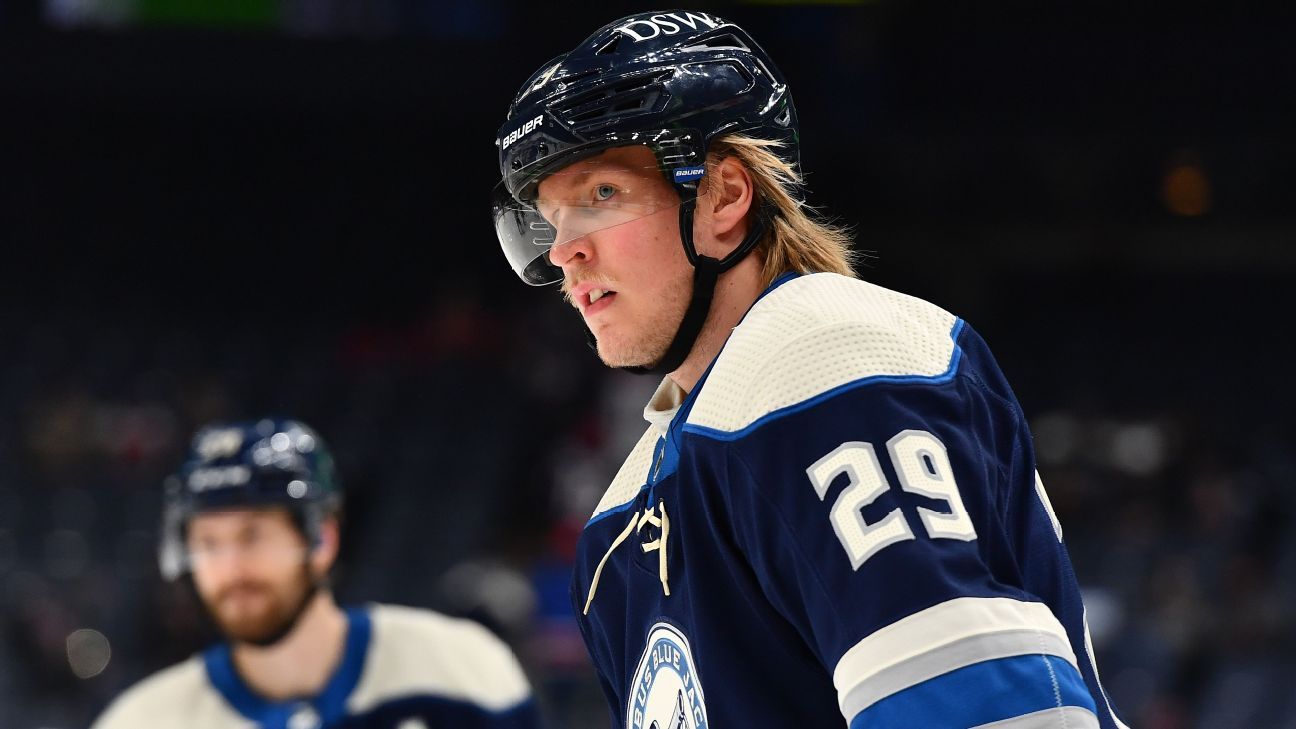 Patrik Laine is a winger for the Columbus Blue Jackets. Depending on what he’s wearing to the game, he is also a James Bond villain, an extra from “The Matrix” or the DJ at a club that’s strictly for vampires.

These were some of the reactions to Laine’s pregame fits, from the purple blazer with the black turtleneck he wore to the Blue Jackets’ opening night game to the blue tuxedo jacket and black checkered tie he crushed this week. He finished these audacious ensembles with slick hair and rainbow-tinted trapezoidal sunglasses.

“I don’t know what to tell you. It’s just an outfit that stands out a little bit,” he told ESPN recently. “You gotta bring your A-game off the ice too. Look good, play good.”

Laine, 23, is aware that his clothing choices have become fan obsessions, thanks to the Blue Jackets’ spirited social media feeds. “It’s always fun to see the fans react to that kind of stuff. But even if I didn’t get it, I would still feel confident and happy in my selections,” he said.

Laine wasn’t confident or happy last season. The Winnipeg Jets traded him to the Columbus Blue Jackets in a deal that saw them acquire center Pierre-Luc Dubois. His offensive output dropped to 1.8 points per 60 minutes, the lowest rate of his career. His goals per 60 minutes dropped under 1.0 for the first time. Blue Jackets fans were disappointed, and he was disappointed in himself, as he struggled through the NHL’s pandemic-impacted season.

“Last year was tough. Kinda lost the reason why we play hockey: the passion, having fun,” said Laine. “I feel like that’s been back for this year. I think this year, I’ve been able to just enjoy hockey.”

Yet that enjoyment has been tempered. Laine suffered an oblique injury that limited him to 15 games this season. During that injury rehab, he suffered a personal tragedy: His father, Harri Laine, died suddenly at 54 years old.

“It’s been the hardest time of my life, for sure. It’s still in my mind, quite a bit,” he said of his father’s loss.

It should all weigh on Laine: The adversity, the grief, along with those unfulfilled expectations of others that have dogged him during his career. But he keeps it all in perspective.

“It’s just hockey,” said Laine. “You gotta remember that every now and again.”

‘I’m probably just as good as those guys’

Laine hasn’t always been considered among the NHL’s fashion trendsetters. Is he a secret Auston Matthews?

He laughs at the comparison. “Maybe not as crazy as he is. But I still like to wear cool clothes and stuff.”

Laine and Matthews aren’t just linked through a love of couture. The Toronto Maple Leafs drafted the center No. 1 overall in the 2016 NHL draft, with Matthews having been labeled as a potential franchise player. The Winnipeg Jets selected Laine second overall, a clear runner-up to Matthews who was considered one of the best pure goal-scoring wingers to come through the draft in years.

He started getting left out of future star conversations that included names like Matthews, Connor McDavid and Jack Eichel.

Laine said he hadn’t paid that much attention to that shift in perception.

“I know that when I’m on, I’m probably just as good as those guys. I can do things that not many guys can do,” he said. “It doesn’t matter if I’m not in the conversation for winning [an award] in someone’s opinion. I don’t care about that. I want to win and play good. That’s all that matters to me.”

Laine has shown he marches to a different beat than many of his highly drafted peers. There are those pregame fits. There are those moments when his palpable sense of humor spills out, like when he pantomimed a sad violin near the Minnesota Wild bench; or when the Vancouver Canucks banned playing video games on the road, and Laine responded, “They need something to blame after last year.”

(For the record, Laine is still logging plenty of time with the “Call of Duty” series, but “maybe not as much as I used to.”)

He’s produced offensively, although perhaps not to expectations established in his first two seasons. Laine has also battled the perception that all he can do is put the puck in the net, rather than prevent it from happening in his own end.

“I don’t want to be thought of just as the guy who scores. I want to do more than that,” he said.

Laine admits that once you’ve been defined as a one-dimensional player in the NHL, it’s difficult to get redefined.

“I mean, I’ve dealt with certain labels pretty much my whole career. It’s not easy to get out of it,” he said. “But I don’t keep myself in a box. I know I can do different things. I want to be able to do multiple things on the ice. Not just score and be a liability in every other aspect.”

That commitment to playing a complete game hasn’t always been evident under every coach. Like last season after he arrived in Columbus, when Laine played under the rigid requirements of John Tortorella, who is now an ESPN analyst.

Laine was benched by Tortorella during last season. After the coach’s dismissal, Laine told Finnish media that they had a clash in philosophies about the amount of “freedom” an offensive player should be given.

“Everyone should be given the opportunity to be themselves. Then, of course, you have to play within the team’s system. I think it’s stupid not to use my potential,” said Laine.

There was the notion of friction between the two. Laine now says the relationship between he and Tortorella was more beneficial than some might suspect.

“They can think of him as kind of an a–hole if you don’t know him. But we had really good conversations off the ice about different things. Everything he’s trying to do is help the team play better and try to win,” said Laine. “I think he tries to help everyone. That’s what coaches do. He was trying to help me, and I wasn’t trying to help myself last year.”

‘I have seen a different guy’

Laine entered the 2021-22 season with a one-year contract before he’s set to hit restricted free agency this summer. He had a fresh start under head coach Brad Larsen, who said watching Laine in the preseason was like seeing “a different guy” than the player he was last season.

“He worked out in the summer. He got himself in better shape. I think he’s got a little chip on his shoulder. He wants to prove to everybody that he’s still got a lot of game,” said Larsen before the season. “He’s a young man still. He really is. He’s had so much success, young, that it’s scary to think that as young as he is still. There’s a lot of growth left. But I’ve been really impressed with how he’s been handling himself.”

Laine hasn’t always handled the emotional ebbs and flows of the NHL well. He’s soft-spoken in public, but can be loud behind the scenes when his game isn’t clicking. He would bluntly discuss his struggles and unhappiness in Winnipeg, including one season when he outright said “it feels like hockey is really hard right now.”

But Laine said he’s not controlled by those emotional swings, because he doesn’t allow them to linger.

He came into the season in a happier place. Columbus was more familiar to him, as he was able to see more of his new home as pandemic restrictions were lifted. He started to get noticed around town, too.

“Not in the crazy way like in Winnipeg,” he said, “but some noticed me.”

Laine burst out of the gate for the Blue Jackets this season, with points in his first five games.

“This year, it’s been getting a new opportunity. Starting with a clean table. That’s always fun. So is winning more than losing,” Laine said.

He had 10 points in his first nine games before an oblique strain put him out of action after Nov. 3. “We’re losing a pretty important guy,” lamented Larsen at the time.

The Jackets were 6-3 with him in the lineup. They were 14-13-1 by the time he returned on Dec. 30. But rather than his team’s record, Laine’s mind was on another loss.

‘Losing my best friend is tough’

In a tragic sense, Laine said his injury was advantageous. He wouldn’t have been playing for the Blue Jackets anyway when the team gave him permission to fly back to Finland and say goodbye to his father Harri, who passed away unexpectedly on Nov. 21.

“He’s been my No. 1 fan and supporter, always. Hockey was our thing, and our passion. I definitely wouldn’t be here without him,” said Laine, upon returning to the team.

Harri Laine would wake up at 3 a.m. to watch his son play in the NHL. Not just on occasion, Patrik Laine said, but nearly every time he stepped on the ice.

“That was one of the only games my dad’s never seen me play,” Laine said after returning to the lineup on Dec. 30. Laine scored his fourth goal of the season that night in a shootout win over the Nashville Predators.

“Losing my best friend is tough,” he said. “I tried to make him proud. He always wished for me to work hard every time I go out there. That was my mentality.”

He credited the Blue Jackets’ support, and the open arms that met him upon his return, in helping him cope. “These guys have been great in supporting me and my family,” he said.

Laine is trying to find his groove again since returning. His goal on Dec. 30 was his only one in the last six games, having only tallied one assist otherwise. The Blue Jackets are under .500 and creeping near a double-digit points deficit for a playoff spot. Then there’s the mystery surrounding Laine’s future with the Blue Jackets, as he is poised to be an RFA this offseason.

“I know I got this year left. We’ll see what happens after that. That’s pretty much all I know right now,” said Laine, who has a $7.5 million cap hit this season. “You know at this point that you’ll get paid. I just want to be somewhere where I’m comfortable and can play hockey. I’m enjoying playing hockey here and enjoying life overall.”

“It’s not the end of the world if things are not going well or you’re losing every now and then. It’s just hockey,” he said. “And you have to enjoy it while it lasts.”

‘A force to be reckoned with’: Rising American Ben Shelton on dream run at Aussie Open
On Virat Kohli vs Sachin Tendulkar Comparison, Kapil Dev’s No-Nonsense Response
Source: Clevinger under investigation by MLB
Guardiola blasts City players, fans despite win
Travis Kelce has cemented his legacy as one of the greatest TEs of all time