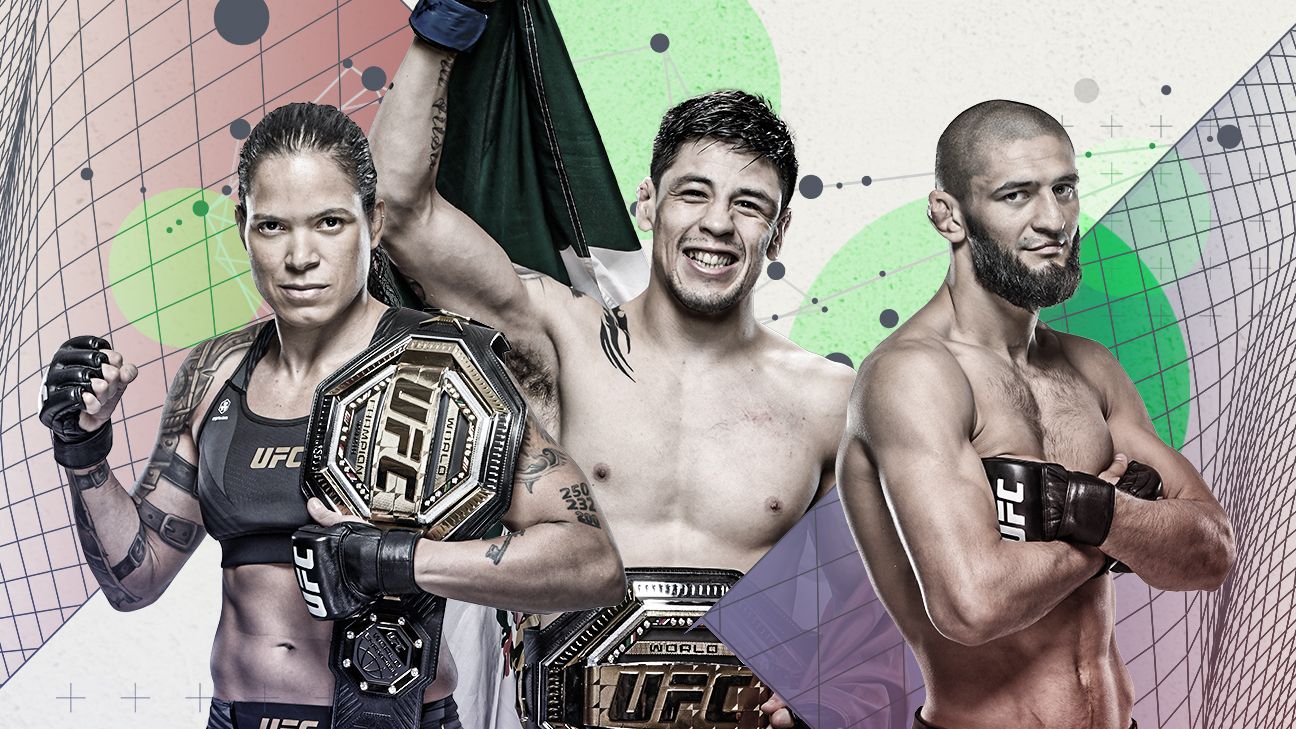 We’re days away from the first UFC fight card of 2022, and just over a week away from a UFC 270 pay-per-view featuring title fights on opposite ends of the spectrum — heavyweight and flyweight. The MMA world is cranking its way back into action, and a new year is filled with excitement and possibility.

As we look ahead, the next 12 months will be an opportunity for the best and brightest MMA has to offer to prove they still belong on top. So when the dust settles at the end of 2022, and the fights are etched in the history books, who will have had the best year?

ESPN’s MMA contributors set out to project which fighters will show out the most in 2022, and after a two-step voting process, they’ve narrowed it down to the top 30. The final list features fighters from three promotions — veterans and rising stars, champions and contenders — ranked by their potential for success over the next 12 months.

There’s already been some surprises in the first 10 names revealed, which included Conor McGregor, Dustin Poirier and four current champions. From 20-11, you’ll find five more champs, two iconic former champions and three fighters who have a clear path to their first title in 2022. Brett Okamoto, Marc Raimondi and Jeff Wagenheim have a lot to say about these 10 fighters.

Follow the link to each UFC result to watch a replay of that fight on ESPN+. Fighters 30-21 were revealed on Wednesday, and 10-1 will be released on Friday.

Next fight: Jan. 22 vs. Figueiredo, for the UFC men’s flyweight championship (UFC 270)

2022 outlook: Going into the new year, the UFC’s 125-pound division belongs to the man from Tijuana, Mexico. The UFC cut Moreno in 2018 after he lost two in a row. It’s rather remarkable to see where he is now. If 2021 was about becoming a champion, 2022 will be about building his legacy, as it could be a very active year for the 28-year-old. He’ll be in action early, as he’s scheduled to defend his title against former champ Deiveson Figueiredo at UFC 270, in what will be their third consecutive fight against one another. — Okamoto

2022 outlook: In one of the most impressive victories of 2021, McKee stopped Patricio “Pitbull” Freire by submission in under two minutes last July to win the Bellator featherweight title. At 26 years old, McKee is the biggest male star in Bellator and one of the very best fighters in the world not on the UFC roster. The next 12 months could be big for McKee. The rematch with Freire seems likely next, but McKee could also go to lightweight and challenge the older Freire, Patricky, for a second belt. The sky seems like the limit for “The Mercenary,” who is already considered one of the best 145-pound fighters in the world. — Raimondi

2022 outlook: A rare opportunity was set in front of Holloway, then circumstances yanked it away. The former UFC men’s featherweight champion lost his title to Alexander Volkanovski in 2019, then dropped a rematch the following year. Fighters who’ve lost twice in a row to the champ don’t usually get a third shot. But Holloway went on to win two straight over top contenders and clearly established himself as the most worthy next challenger to Volkanovski, and a third meeting was booked for March. No sooner had the matchup been announced, however, when Holloway had to pull out with injury. Where does that leave his 2022? He’ll likely get his shot to return to the throne at some point, but the year doesn’t seem as supercharged — or as “Blessed” — as it once did. — Wagenheim

2022 outlook: The plan laid out by Abdulmanap Nurmagomedov, the father of Khabib and longtime trainer of Makhachev, was always for Khabib to retire undefeated and pass the torch to Makhachev. That plan could be fulfilled this year. Makhachev fights Beneil Dariush next month, and the winner will probably fight next for the UFC lightweight belt, against either current champ Charles Oliveira or top contender Justin Gaethje. Makhachev, a Dagestan native, has won nine straight and submitted his last three opponents. He seems more than ready to follow in the footsteps of Nurmagomedov, who retired in 2020 as one of the greatest of all time. — Raimondi

2022 outlook: The unthinkable happened in late 2021, as Nunes surrendered her bantamweight title to Julianna Peña via submission loss in December. Say this about Nunes, she handled the loss extremely well — and she has already made it clear she intends to come back strong. In a way, this loss could actually shine more of a spotlight on Nunes than she’s had in years. Her dominance had become such a sure thing, there was no drama around her fights. There will be plenty of drama around her rematch against Peña, however, as we wait to see how The Lioness responds to her first taste of adversity in years. — Okamoto

Next fight: Feb. 12 vs. Israel Adesanya, for the UFC middleweight championship (UFC 271)

2022 outlook: When he challenges Israel Adesanya at UFC 271, Whittaker will be seeking to regain the title he lost to Adesanya in 2019. Since that defeat, Whittaker has won three in a row and fortified his position as the division’s top contender. If he successfully recaptures his belt, Whittaker’s 2022 will be off and running, with high-profile fights illuminating the road ahead. A loss, however, would be difficult to overcome for a fighter who is a man of few words, and has built his reputation almost entirely with his actions in the ring, rather than in the leadup to fights. He is not the type to talk his way into endless opportunities, so working his way towards another title fight would be an uphill climb. For that reason, Whittaker’s 2022 is likely to be defined within the year’s first month and a half. — Wagenheim

2022 outlook: At press time, it’s still unclear where Harrison will end up fighting this year. Could she sign with the UFC or Bellator? Or maybe head back to PFL to try and win a third championship there? No matter the destination, Harrison is poised for a mammoth year. Since debuting in 2018, Harrison has finished 10 of her 12 victories, and that train doesn’t seem like it’s going to slow down any time soon. A 2022 campaign could feature huge fights with the likes of Cris Cyborg in Bellator or a top-tier UFC star, or another $1 million PFL prize. Either way, Harrison is one of the top women’s fighters in the world, and a must-watch every time she fights. — Raimondi

2022 outlook: Chimaev’s explosion into the UFC has been nothing short of fascinating. He’s had all of four fights inside the Octagon, and there is already talk of him fighting Kamaru Usman — arguably the best welterweight of all time. The stories out of Sweden, where he trains, are impossible to ignore. This welterweight prospect trains regularly with light heavyweights in Alexander Gustafsson and Ilir Latifi, and Gustafsson has said he believes Chimaev would “put Kamaru Usman to sleep.” He looks like he possesses the most potential we’ve seen in a fighter in years. What will that potential lead to in 2022? — Okamoto

2022 outlook: There are not a lot of fighters who are more entertaining to watch than the creative and inventive Prochazka. And while he’s a relative newcomer to the Octagon, with just two UFC appearances to his name, he’s on the verge of a fast-track ascent to the top of the light heavyweight division. The former Rizin champ appears to be the likely first challenger for new UFC champ Glover Teixeira, who mentioned the 29-year-old Czech (“You’re next!”) during his postfight interview inside the cage when he won the belt in October. Right after acknowledging Prochazka in the crowd, though, the 42-year-old Teixeira said he doesn’t plan to make his first title defense until May. With that in mind, Prochazka’s year might take a while to get going, but if he does get that fight and succeeds in winning his 13th in a row, it will have been worth the wait. — Wagenheim

Next fight: April 9 vs. Chan Sung Jung, for the UFC featherweight championship (UFC 273)

2022 outlook: Volkanovski had a chance to put the finishing touches on the Max Holloway portion of his career and cement himself as one of the best featherweights ever at UFC 272 on March 5. But Holloway withdrew due to an injury, and now Volkanovski will defend against Chan Sung Jung at UFC 273 instead. Volkanovski is on an incredible roll. He has won 20 straight fights overall, including his first 10 in the UFC. He has a pair of title defenses, and Volkanovski’s win over Brian Ortega at UFC 266 was ESPN’s Fight of the Year in 2021. He will look to add to that run in 2022. — Raimondi