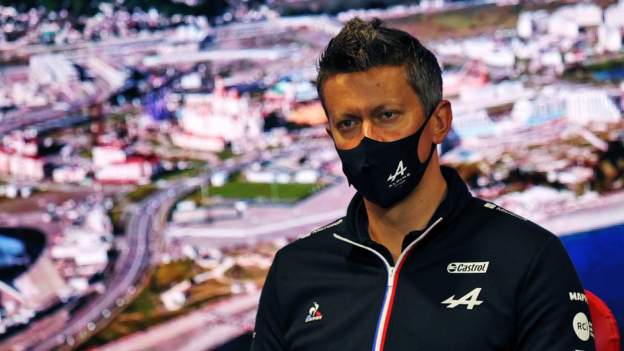 Alpine executive director Marcin Budkowski is to leave the team with immediate effect.

Frenchman Budkowski, who joined what was then known as Renault in 2017, is the victim of a management reorganisation following their first season under their new name.

The reshuffle has been decided by Alpine chief executive officer Laurent Rossi, who was appointed before the start of last season.

Alpine have given no further details.

But former Aston Martin team boss Otmar Szafnauer has been linked with a move to the team.

A team statement said Rossi would “temporarily ensure the team’s management to allow everyone to focus on the next season’s preparation”.

A spokesperson added: “Laurent is already very involved in the day-to-day affairs of the team and will do what is needed to make sure the team hits the ground running in 2022.”

Rossi thanked Budkowski for his “commitment and contribution”, adding: “The team is fully focused on getting the car ready for the first race in Bahrain and delivering a step beyond in performance”.

Alpine won one race last season, with Esteban Ocon in Hungary, while Fernando Alonso scored a podium in Qatar. Overall, the team dropped in performance compared with the previous year, although they did manage to retain fifth place in the constructors’ championship.

Ocon’s win was the team’s first victory under Renault ownership since Alonso won the 2008 Japanese Grand Prix, although Kimi Raikkonen won a race in each of the 2012 and 2013 seasons for the same outfit under different ownership.

Alpine are hoping for a step up in competitiveness this year, when new technical rules are being introduced to close up the field.

Veteran Indian Batter Murali Vijay Announces Retirement From All Forms of International Cricket
How to watch PGA Tour’s AT&T Pebble Beach Pro-Am on ESPN+
32 teams, 32 looming free agent decisions: Which players will return to their team?
Rays, Díaz avoid arbitration, agree to 3-year deal
What do teams have to give up for Sean Payton? Our reporters spell it out