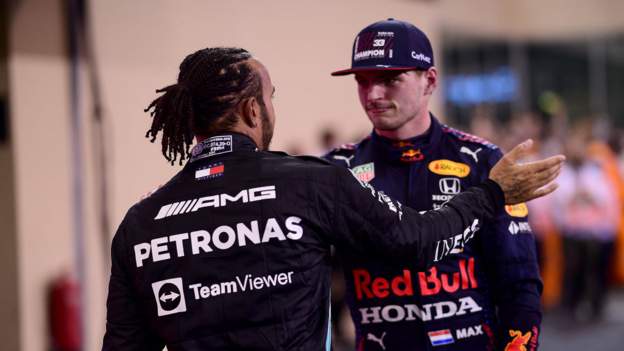 The FIA is to hold separate meetings with the sporting directors from the Formula 1 teams and the drivers.

It will then present its findings to F1 bosses next month.

Final decisions will be announced on the eve of the new season.

The stakes for the inquiry are high, because it emerged this week that Hamilton will not decide whether to return to Formula 1 this season until he sees the results of the FIA’s inquiry into the Abu Dhabi race.

Insiders say Hamilton has lost trust in the governing body as a result of the events of Abu Dhabi and the FIA needs to take substantive action to win back his confidence.

Last month, in the aftermath of the race, the FIA admitted the controversy was “tarnishing the image” of F1.

The inquiry – led by FIA secretary general for motorsport Peter Bayer, who was recently appointed the executive director of single-seaters – will have two key stages.

On January 19, the FIA’s sporting advisory committee – essentially, the sporting directors of all the F1 teams as well as FIA representatives – will meet to discuss the use of the safety car.

In the days after that, there will be a “shared discussion with all F1 drivers”.

An FIA statement added: “The outcome of the detailed analysis will be presented to the F1 Commission in February, and final decisions will be announced at the World Motor Sport Council in Bahrain on 18 March.”

In addition, new FIA president Mohammed Ben Sulayem has asked Bayer “for proposals to review and optimise the organisation of the FIA F1 structure for the 2022 season”.

On the face of it, the timeline seems to put Hamilton in a difficult position, because he will need to make a decision on his future before the first pre-season test, which is on 23-25 February.

In reality, though, the FIA’s intentions will become clear long before the planned date of the official announcement on 18 March, the first day of track action at the season-opening race in Bahrain.

“Hamilton will have an opportunity to discuss [the matter] with the people leading the process, because there will be a meeting with the drivers,” an FIA spokesman said.

The direction of travel will begin to emerge by the time of the meeting of the F1 Commission, which comprises the teams, and representatives of the FIA and F1.

No date has been set for this as yet but the plan is for it to be held in early February.

And if there are changes to key officials, these will become obvious to F1 teams long before the start of the season.

Masi’s position is under particular scrutiny.

Mercedes F1 team boss Toto Wolff accused the Australian of a “freestyle reading of the rules” which he said “robbed” Hamilton of the championship. And many senior figures in F1 do not see how Masi can survive this inquiry.

The future of F1 single-seater head Nikolas Tombazis is also in question.

Wolff is said to be meeting Ben Sulayem on Friday for their first talks on the topic of the Abu Dhabi race.

McIlroy leads by 3 ahead of final day in Dubai
Is Scott Rolen really Cooperstown-worthy? Six reasons the third baseman is a Hall of Famer
Wales Rugby to be externally reviewed – chief
Wyshynski: Celebrating Ryan Hartman and other NHL ‘glue guys’
CEO Phillips resigns after WRU allegations