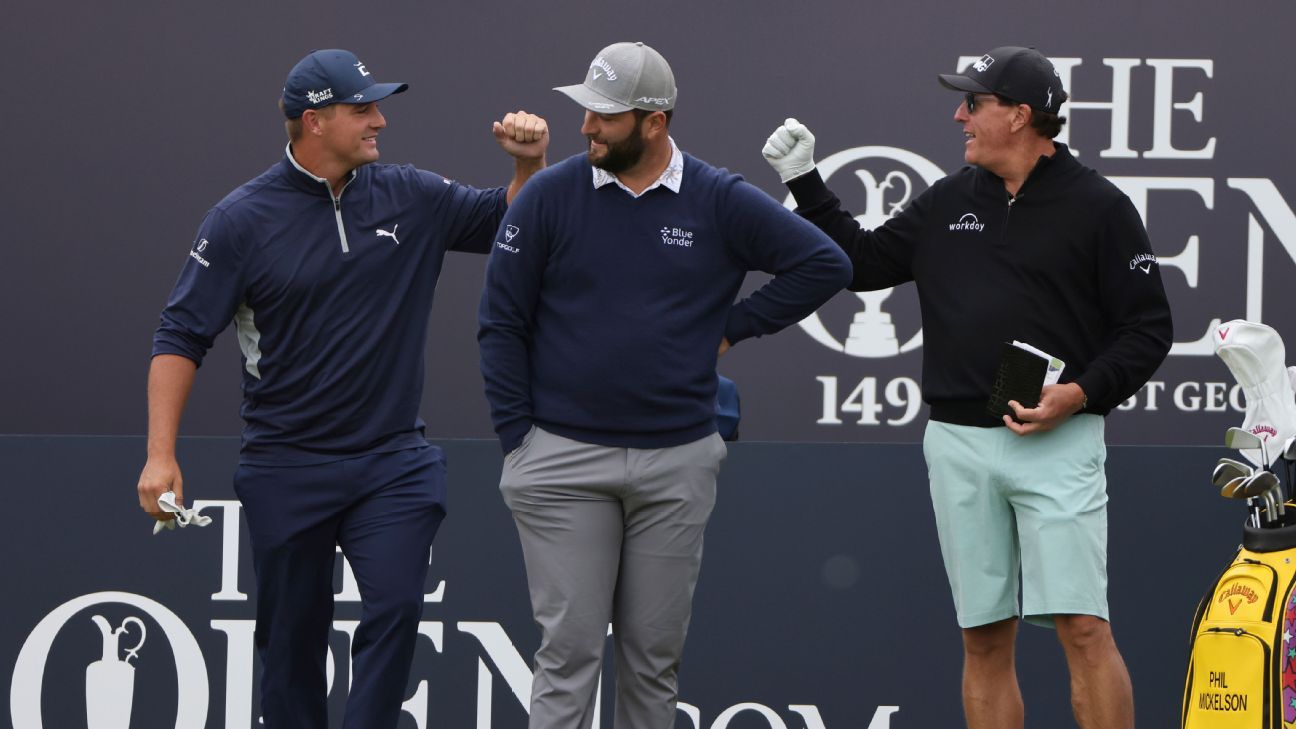 The first event of the year on the PGA Tour gave a possible hint of what is to come in 2022: Birdies. Lots and lots of birdies.

But what else should we expect? Which players should we keep an eye out for? Which unknown might announce himself? And which recognizable face might take a step backward?

With the first full-field event of the year set to begin Thursday when the Sony Open tees off in Hawaii — here’s how to watch on ESPN+ — we gathered our experts.

What player on the PGA Tour are you expecting to take a big leap forward this year?

Michael Collins: Daniel Berger. I expect a multiple-win season from Berger this year. His game, along with a slow and steady ascension in the Official World Golf Ranking gives me confidence when I say he’ll finish the year around top 5.

Michael Eaves: Tony Finau. He’s been way too good for way too long to have won just two times. With his most recent win coming during the FedEx Cup playoffs against a major-quality leaderboard, it may just be the push he needs to reel off a couple multi-win seasons in a row.

Kevin Van Valkenburg: Scottie Scheffler. You know what Scheffler’s WORST finish in a major was in 2021? That would be T-18 at the Masters. All he did in the other three majors was post three top 10s. Throw in a runner-up finish at the WGC-Dell Technologies Match Play and a fearless performance at the Ryder Cup (where he vanquished Jon Rahm in singles) and you could argue that Scheffler has already made his leap, except for one thing: He still doesn’t have a win as a professional. I think that changes this season. His game shows up everywhere.

Nick Pietruszkiewicz: Matt Fitzpatrick. I wanted to say Justin Thomas or Rory McIlory, but picking any player ranked in the top 10 in the world felt like cheating. So let’s go with Fitzpatrick, who is currently ranked 26th. He had just five top 10s in 20 PGA Tour starts; he also missed five cuts. He was gone after the first week of the FedEx Cup playoffs. He’s never won in the United States. He even admits its time. “I’m not a rookie anymore,” he said toward the end of 2021. “I’m 27. In my own mind, I know I’ve got to start competing in the big events so my name is up at the top of the leaderboard more often.” Well, this is the year.

Which player are you worried might be headed for a step backward?

Collins: Bryson DeChambeau. Golfers are always searching to get better. The danger in doing that is blowing by (or not staying in) the “sweet spot.” I think at one point in 2020 Bryson found that sweet spot between distance and touch. My concern for DeChambeau, who pulled out of this week’s event with a wrist issue, is once you are out of that spot, getting back is extremely challenging. This could be a “one step back” year.

Eaves: Bubba Watson. He hasn’t won since June 2018. He finished 81st in the FedEx Cup standings last year, and he recently parted ways with his longtime caddie, Ted Scott. The shotmaking ability is still there, but pulling his game together for four straight rounds has been rather challenging of late for the two-time Masters champ.

Van Valkenburg: Brooks Koepka. It’s actually fun to make these kind of predictions about him because you know he’s going to get wind of them and use them as motivation. No slight is too small to use as fuel in Koepka’s eyes. As much as I love watching him rub dirt in people’s faces, I’m not convinced he’s going to stay healthy. After finishing T-2, T-4 and T-6 at the three majors he was healthy for last year, it wouldn’t be a shock to see some regression, especially if his knee or wrist don’t hold up.

Pietruszkiewicz: Louis Oosthuizen. I love the swing. Who doesn’t? But asking the 39-year-old to replicate what he did in 2021 is a big, big ask. He was in the hunt at three majors — 54-hole leader at The Open, share of the 54-hole lead at the U.S. Open, T-2 at the PGA Championship behind winner Phil Mickelson. Overall, he had 14 top 25s, eight top 10s and six top 5s. But zero wins. The letdown from those close calls is going to leave a mark — and carry over into 2022.

What player whose name people might not know, will they definitely know by the end of 2022?

Collins: Joel Dahmen missed the cut in six of his first seven starts in 2021. Then Dahmen won the Corales Puntacana Championship and is on a run of consistent golf (only two cuts missed in 18 events). Dahmen only made the first event of the playoffs last season, but he will be at the Tour Championship to end this season. Expect to see him considered for a Presidents Cup captain’s pick. That “just good at everything” golfer you hear announcers talk about, that epitomizes this guy.

Eaves: Mito Pereira. With limited status last year, he put together a string of three straight finishes of T-6 or better, including finishing a T4 at the Olympics. Through his first seven starts as a full-time Tour member so far this season, the rookie from Chile has made six cuts and posted a career-best third-place finish in Napa. So you might want to start practicing saying his name, because it sounds way better when you roll the R’s.

Van Valkenburg: Sahith Theegala. The 2020 Haskins Award winner, Theegala has already shown he has the game to win on the PGA Tour. He held the lead at the Sanderson Farms Championship last year before fading to T-8 on Sunday. He likely just needs more experience to break through. His ascension could be huge for the sport if it does happen. Theegala was born and raised in Los Angeles, but his parents moved to the United States from India. Theegala’s rise has already sparked tremendous interest from the Indian media, even though the world’s second-most populous country (1.38 billion) has fewer than 200 golf courses.

Pietruszkiewicz: Sam Burns. Perhaps motivated by being left off the U.S. Ryder Cup team, his worst finish in the last seven starts he’s entered since October is a tie for 19th. He won the Sanderson Farms Championship. He’s up to 12th in the world, thanks largely to his putter. He ranked ninth on tour in strokes gained: putting, fourth in total putting and fifth in three-putt avoidance a year ago. This year, he’s already giving that solid putter more chances of doing damage. Last year, he ranked 52nd in greens in regulation; this season, through five official events, he stands eighth.

The Sentry wasn’t a full field. Only 38 players. But did it teach us anything about what lies ahead?

Collins: What golf fans, and especially purists, better understand after watching how easily the field scored at Kapalua is that this is as strong as golf has been in history. Unless the governing bodies are going to do stupid things to golf courses or Mother Nature intervenes, this will be the lowest scoring year in golf history. And that’s OK. Just because the best in the world can do what they do on a golf course, it doesn’t mean the collapse of the game or the “it’s-becoming-too easy” panic needs to set in. Nah, you still can’t do what they do, just enjoy watching history.

Eaves: Yeah, until they do a drastic rollback of the ball, players are going to continue to tear through scoring records. With the ball spinning way less and going way farther than ever before, some courses — just like Kapalua proved to be — will be no match for the world’s best players.

Van Valkenburg: The best golf tournaments aren’t determined by the score, they’re determined by the kind of shots players are asked to hit. Kapalua may have seemed toothless, but players still had to work the ball both directions and hit shots off uneven lies. It wasn’t a surprise to see the game’s creative thinkers rise to the top of the leaderboard. That’s always going to be more fun than watching driving range golf, which is why it wouldn’t surprise me to see Cameron Smith, Jon Rahm, Justin Thomas and Collin Morikawa in the mix at both Augusta and St. Andrews this year, two of the game’s greatest canvases.

Collins: Under. Rahm will win one major championship this year. If you want to know which one … I didn’t spend hours grinding on my 2022 year long predictions for nothing. So read them here.

Eaves: Under. Considering the depth of talent today among the top 50 players in the world, winning one major in any year will certainly be a major accomplishment.

Van Valkenburg: It feels foolish to bet against Rahm, but I have to take the under. Only 20 men in history have won multiple majors in a single season. Rahm has the most complete game in golf right now, but you only get four shots. What happens if he ends up on the wrong side of the draw at St. Andrews? What happens if he has one bad putting round at the Masters? To win multiple majors in a season, you need to be on an incredible heater but also catch a few breaks. I would love to see it, but the safe bet is still the under.

Pietruszkiewicz: I’m feeling over here. I think he gets two. He’s just so good each and every week. Granted, the depth of the fields at majors — every week, really — is outrageous. It’s hard to win. It’s even harder to win majors. But he’s got the game, he’s got the confidence and he’s got the emotions in check when it matters most, which he proved by winning the U.S. Open last year with a gutty push over the final few holes at Torrey Pines.