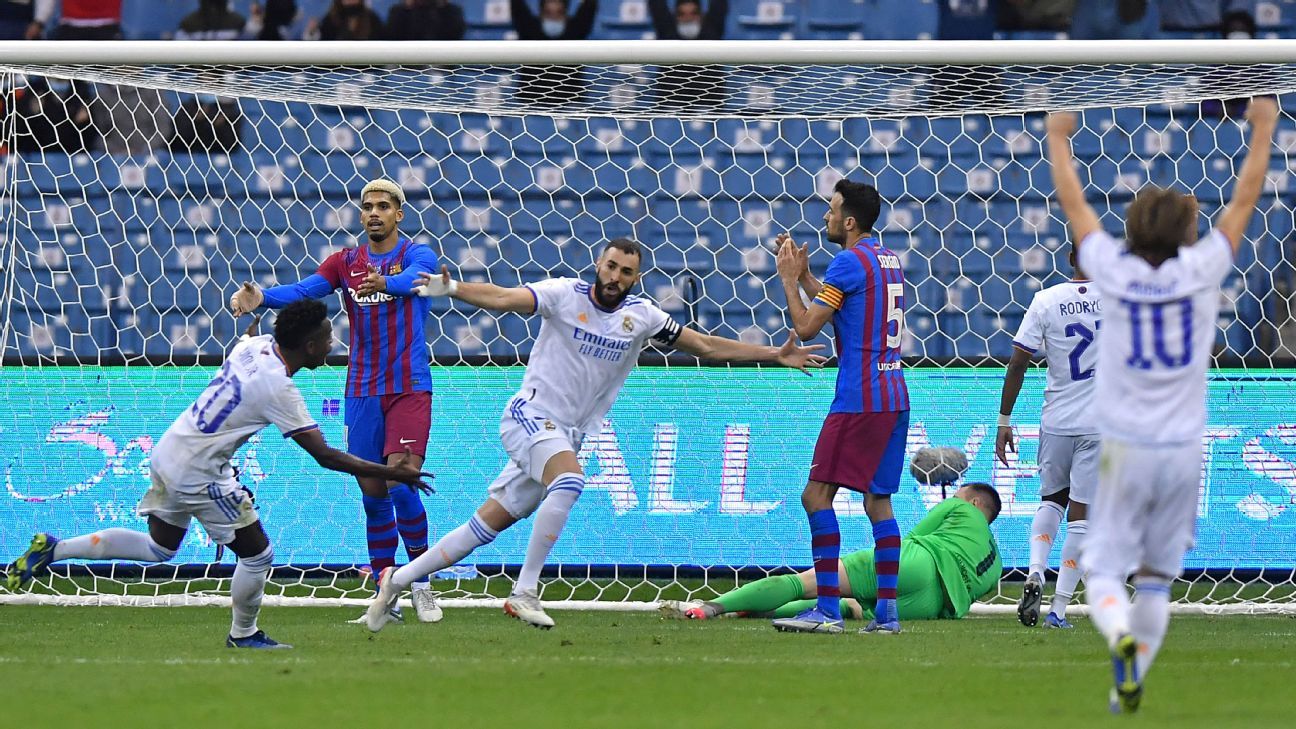 Wednesday’s Supercopa de Espana clash between Clasico rivals didn’t disappoint, as Real Madrid hung on to defeat Barcelona 3-2 in front of an enthusiastic crowd in Saudi Arabia. (Stream highlights here: U.S. only.) After Barca twice battled back from a goal down to take the game to extra time, Federico Valverde’s 98th-minute goal settled the affair and put Carlo Ancelotti’s side through to Sunday’s final, where they’ll take on Athletic Club or Atletico Madrid for the title.

So what did we learn about these two super-clubs from Wednesday night? Alex Kirkland (Real Madrid) and Sam Marsden (Barcelona) break down the game from both perspectives.

Real Madrid’s win here was, in a sense, their season to date in a nutshell. The victory highlighted some of their notable strengths — and they will be enough to see them through most games — but it exposed some concerning weaknesses, too, some of which may cost them in more important competitions than this midseason Supercopa.

Let’s start with the positives. In the first half, the team looked bracingly direct and clinical, with Vinicius Junior cutting inside to cue the attack and Karim Benzema and Luka Modric pulling the strings. Vinicius’ 25th-minute opener was a case study in exactly how far he’s come as a player, as he made a difficult chance look effortless.

When they go up against all but the very best opposition, the sheer quality of Madrid’s best players will tend to get them through. Benzema set up Vinicius for his opener with a carefully weighted pass and took his own 72nd-minute goal with typical composure, having forced a good save from Marc-Andre ter Stegen moments earlier.

Madrid have a well-built, deep squad too, even if coach Carlo Ancelotti is reluctant to make full use of it. Rodrygo, Lucas Vazquez and match-winner Valverde were all handy, energetic introductions when the starters began to run out of legs in the second half. Still, there were moments of worry, nagging doubts that made you think perhaps this team isn’t quite as good as their dominance of LaLiga suggests.

The midfield trio of Modric, Casemiro and Toni Kroos lack dynamism for all their class. It’s something Ancelotti does his best to minimise by allowing them to skip pressing and sit deeper in midfield instead, but there will still be games when they’re overrun, as they were at times early in the second half by Barcelona’s exuberant youngsters.

Then there are the persistent issues in defence, which goalkeeper Thibaut Courtois is often able to mask. David Alaba’s leadership and organisation were badly missed, while Eder Militao’s dramatic improvement hasn’t eliminated his knack for the occasional catastrophic lack of defensive judgement. He takes part of the blame for both of Barca’s goals.

Ancelotti has many admirable qualities and deserves credit for quickly shaping this team into a largely efficient, counterattacking unit that looks to play to its strengths, but his insistence on sticking with the same side week-in, week-out could cost Madrid later in the season. They’ll go into the final as favourites, regardless of who advances from Thursday’s semifinal. They should have enough firepower against either opponent to fly home with the first silverware of the season.

Once they’re back home, the points accrued in the first half of the LaLiga season should be enough to see Ancelotti land his long-awaited first Spanish league title. But you wonder if it will be enough against a Manchester City, Chelsea or Bayern Munich in the Champions League. Fortunately, that’s a question for another day. — Kirkland

Barcelona: Another defeat, but Xavi’s side turned the corner

Finally, there’s light at the end of the tunnel for Barcelona. They’ve been locked in darkness for most of the season, knocked out of the Champions League and sitting sixth in LaLiga, but Wednesday’s defeat to Real Madrid at least showed they’re able to compete with their rivals once again.

“Compete” has been a buzzword for coach Xavi Hernandez since his side was beaten 3-0 by Bayern Munich in December. After that loss in Germany, he said it was time for the club to turn the page and start a new chapter in their history. Prior to facing Madrid this week, he called on his players to make this extra Clasico a turning point for their season. Based on how they fared against Madrid, it could prove to be just that even though it ended in defeat.

For the first time in a long time, Barca went toe-to-toe against a side many would consider among the favourites in the Champions League. Madrid are top of LaLiga and 17 points ahead of Barca, but the gap was not obvious on the pitch in Riyadh. Barca laboured at times in the first half and were perhaps too cautious, but they woke up after Vinicius’s opener. Luuk de Jong had already seen two headers saved by Courtois when he slightly fortuitously turned home after Militao’s too-casual clearance.

The Catalan side have struggled for goals this season — they scored just twice in six Champions League games — but they forgot about their problems after De Jong’s leveller. They even looked like they were having fun. With the introduction of the ever-brilliant Pedri, making his first appearance since September after recovering from injury, they began the second half on the front foot. Chances came and went, but it looked like their efforts would be in vain when Karim Benzema restored Madrid’s lead.

Another Xavi buzzword has been “bravery.” He wants his players to take risks with the ball, and he certainly led by example there as Barca were forced to chase the game, switching to a 3-2-3-2 formation and getting his reward. Ansu Fati, who like Pedri was returning from injury, headed in Jordi Alba’s cross to take the game to extra-time. “Tiene gol,” they say in Spain (“he has goal”) and Ansu certainly does. It was his fifth goal of the season in just his ninth appearance — five of them have been as a substitute.

The history books will show a fifth straight win for Madrid in the Clasico, but they may also show a point of inflection for Barca. They avoided defeat in 90 minutes against Madrid for the first time since Dec. 2019 and in addition to competing, could have won the game. There were also returns for youngsters Pedri and Ansu, who are both so vital to this Barca side, and a full debut for Ferran Torres, after his €55 million move from Manchester City.

President Joan Laporta recently heralded that “Barca are back.” They still have a long way to go both on and off the pitch, but they look on the right track under Xavi. With a fully fit squad and one of the most exciting crops of young players in Europe, they should at least finish in the top four this season and avoid missing out on the Champions League. From there, they can focus on bigger challenges. — Marsden