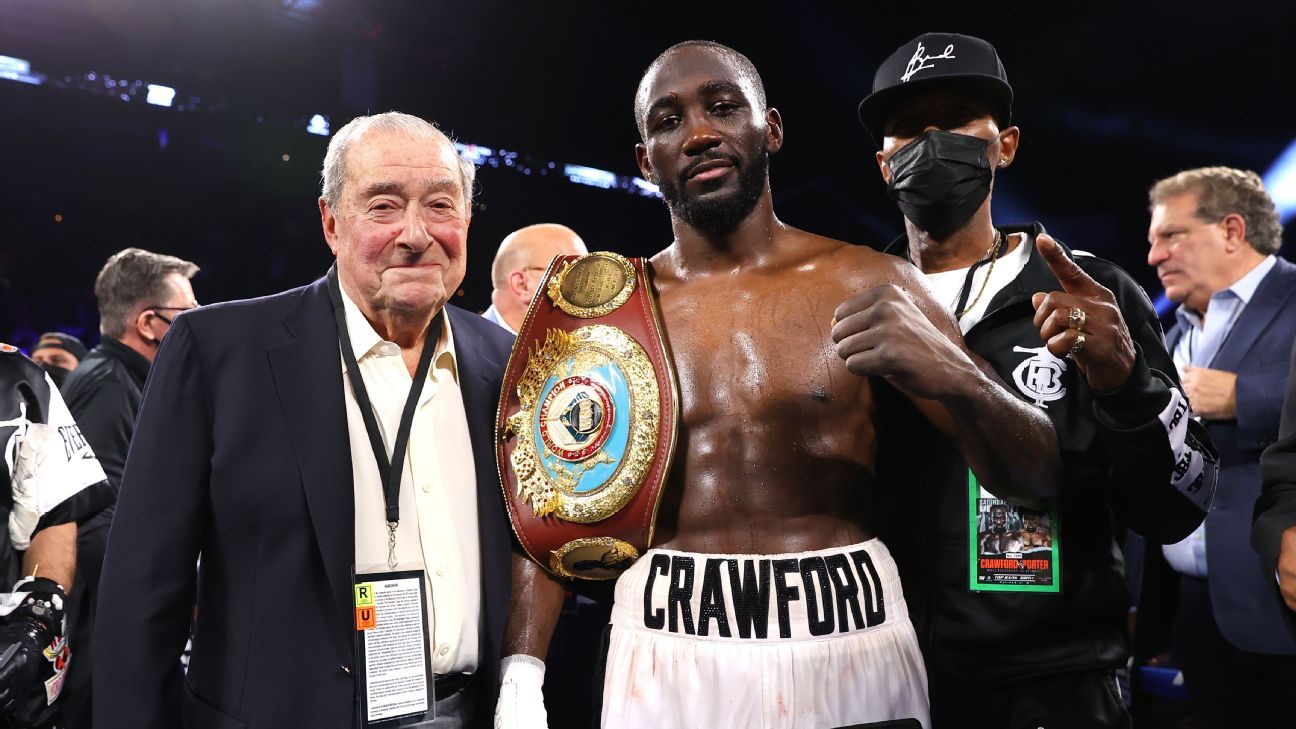 The suit alleges that the 90-year-old Arum “continues to make racist and bigoted statements and purposefully damage the reputations of Black boxers.”

Crawford, who is Black, signed with Top Rank in 2011 and rose to prominence in the boxing world during that time, winning titles in three weight classes on his way to worldwide recognition. He’s currently ESPN’s No. 1 welterweight and No. 2 pound-for-pound boxer.

The suit also claims that “Arum’s sordid history with athletes of color, especially Black fighters, and his bias favoring white and Latino fighters is well-documented and known throughout the boxing world” and that “Arum makes no secret of his deep-seated bias against Black fighters.”

Crawford, 34, is seeking damages to be determined in a trial in excess of $5.4 million, money the fighter claims he lost due to Top Rank’s failure to deliver a second fight in Year 2 of the extension he signed in 2018, along with its inability to offer him a bout with Errol Spence Jr.

The suit claims that when Crawford signed to fight Egidijus Kavaliauskas in 2019, the bout agreement included a $900,000 payment if Top Rank didn’t, in good faith, offer Crawford a bout with Spence by the end of 2020.

“It is unfortunate that Top Rank did not treat Terence properly and in fact spoke out regularly against him,” Crawford’s attorney, Brian Freedman, told ESPN.

Freedman also represented Mikey Garcia in his 2014 suit against Top Rank, which led to the parties terminating the promotional agreement after Garcia was sidelined for nearly three years.

“Unlike other boxers bound to Top Rank contracts, Terence can assert his claims in court without Top Rank forcing him to sit out,” Freedman said. “Make no mistake, that is a game-changer.”

Top Rank declined to comment when contacted by ESPN.

Crawford claims breach of contract, fraudulent misrepresentation and negligent misrepresentation. He also alleges that Arum made disparaging comments about him in an effort to harm his reputation and impact future prospects with a new promoter. The suit points to Arum’s 2020 remarks that he “could build a house in Beverly Hills on the money I’ve lost on him in the last three fights.”

The suit also points to comments Arum made in 2019 regarding the difficulty in making a Crawford-Spence fight with PBC founder Al Haymon, who advises Spence: “He’s gonna say, ‘Spence, listen to me. Don’t listen to the white guys, because if you listen to the white guys they’re gonna steer you down the road. Listen to me, brother. We’re part of a brotherhood. And if I tell you not to fight Crawford, I’m telling you not to fight Crawford.’ That’s exactly what he will say.”