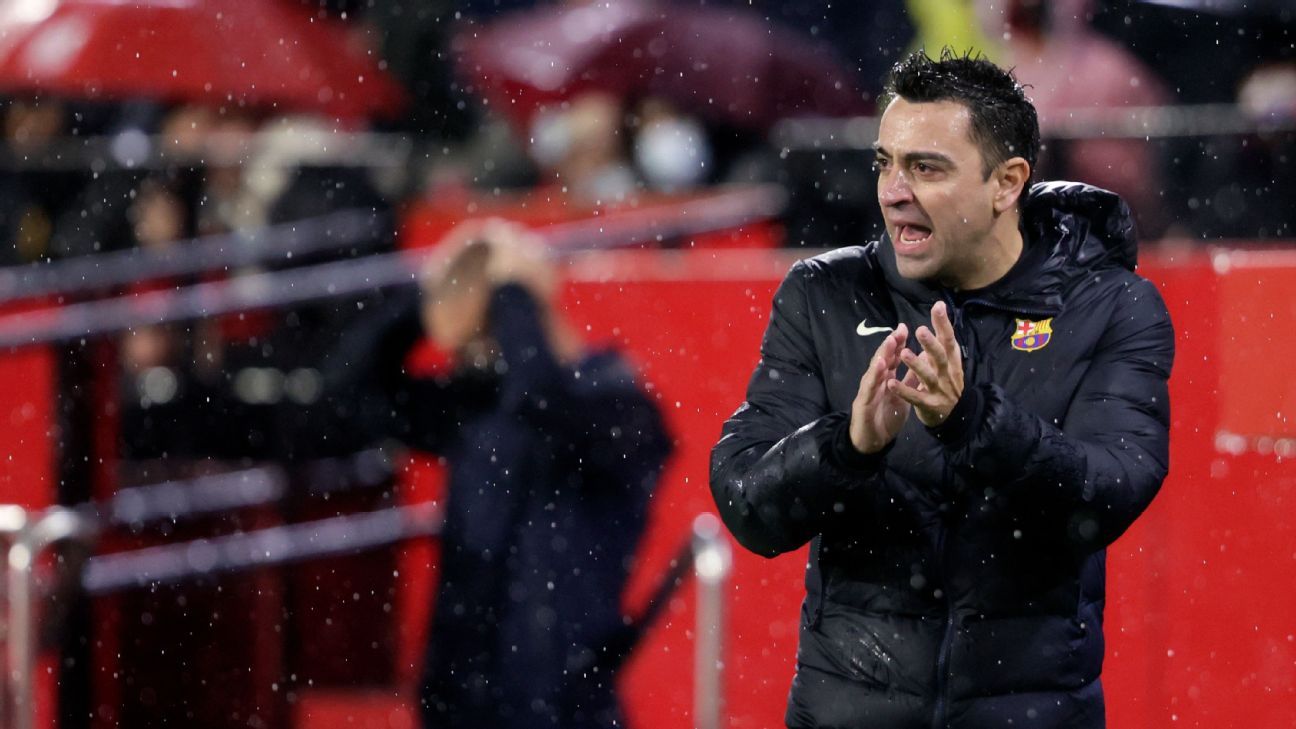 It has been only a few weeks since Xavi commented that “there’s an abysmal gap” between Real Madrid and Barcelona. Frankly, it’ll be quite the surprise if Los Blancos don’t underline the truth of his words in the Supercopa de Espana semifinal on Wednesday (stream LIVE, 2 p.m. ET, ESPN+) by handing the Blaugrana XI a thumping.

Barcelona’s one-time magical midfielder, now the coach charged with producing a silk purse out of the sow’s ear situation he inherited, was essentially talking about the points gap in the table. But ahead of what threatens to be Barcelona’s fifth straight defeat to Madrid — something that hasn’t happened since 1962 to 1964 — it’s likely that Xavi wishes he hadn’t said any such thing. Because somehow, he has to convince his injury afflicted, coronavirus-suffering, super-young, ultra-fledgling team that they’re not going to suffer a healthy stuffing at the hands of Luka Modric, Karim Benzema, Vinicius Junior, Eder Militao, Toni Kroos & Co. Again.

Suddenly, with the ebullience of Nico and Gavi, the return of Ansu Fati, the possible return of Golden Boy winner Pedri, Luuk De Jong scoring goals and the €55 million signing of Ferran Torres to great fanfare, Barcelona (in principle, at least) should be able to field a best XI that can compete with most teams — Madrid included. But not just yet.

Ansu and Pedri have missed most of the season — so has Torres. Midfielder Frenkie de Jong isn’t going to be in shape to play. If defender Ronald Araujo does make it, he’ll be on the pitch five days after surgery on a broken bone in his hand. Centre-back Eric Garcia won’t be ready for much competitive action before the end of February. This, to put it bluntly, is about a million miles away from the best time to be playing against a Real Madrid side that recently racked up a series of big-game performances to tuck away rivals like Real Sociedad, Atletico, Athletic and Sevilla in LaLiga, plus Italy‘s champions-elect Inter Milan in the Champions League.

Victory has become Pavlovian for Madrid. The Russian Nobel Prize-winning scientist famously toyed with the conditioned reflex of dogs, training them so that when a buzzer sounded, it was time to salivate with hunger. Madrid are “best in show,” to continue the analogy, because even while they have shown an Achilles’ heel to the likes of Espanyol, Sheriff Tiraspol and Getafe this season, whenever a big rival is in their sights, they react with spiky, relentless, winning character.

It’s admirable … and very dangerous for this version of Barcelona.

Barca defender Gerard Pique doesn’t agree. “I’m optimistic we can do them damage,” the 34-year-old defender said earlier this week. “It was unjust that they won the Camp Nou Clasico this season, but we were down in the dumps then. The scenario’s changed. We’re on the rise.”

Let’s check back on those words postmatch. Football’s an unpredictable sport, but Barcelona upsetting these particular odds would be pretty seismic.

At least Xavi has been here before.

One positive, in the old “glass half-full” equation, is that Barcelona’s coach has already lived through a time when Madrid made Barca kneel, when things at Camp Nou were chaotic, debt-ridden and deeply lacking in Catalan confidence. And Los Blancos took full advantage. The positive is that Xavi suffered it, learned from it as a footballer, and then authored the greatest few seasons in both Barcelona’s and Spain‘s entire footballing history. The tunnel may be long and dark, but there’s light coming if you’re going in the right direction.

Xavi made his debut in a Clasico as an exciting, 20-year-old organising midfielder but was promptly thumped 3-0 by a pre-Galactico team including Nicolas Anelka, Geremi, Aitor Karanka and Guti. For the next four years, he was able to savour just one Clasico win (out of eight matches) and was in the Barcelona side that suffered the ultimate humiliation of being knocked out of the 2002 Champions League semifinal by Vicente del Bosque’s Madrid. It was misery for the Catalan who supported, and indeed adored, Barcelona long before it appeared he might make the grade there.

Like Raul, Iker Casillas or (currently) Dani Carvajal at Madrid, Xavi’s passion for the Barca badge started long before huge wages guaranteed such loyalty to the club. Ironically, it was around this time — when Xavi was young, Madrid were dominant and his future was being treated lackadaisically by most at Camp Nou — that he came close to playing for the man who’ll be in the opposition dugout at the sold-out King Abdullah Sports City stadium this week: Carlo Ancelotti.

AC Milan spotted Xavi’s brilliance, sniffed a chance to take advantage of Barcelona’s inept handling of the man who’d eventually become their greatest-ever midfielder, and mounted a smash and grab operation. Ancelotti was still a few months away from being hired to manage the Rossoneri for eight hugely successful years, but then-Milan CEO Adriano Galliani came to the Catalan capital, met Xavi’s dad and put a succulent five-year deal on the table.

His father liked the idea, while Xavi was swayed by the allure of the San Siro and the club that had so devastatingly won the Champions League in Camp Nou (starring Ancelotti as a player), 4-0 against Steaua Bucharest in 1989, when he was a starry-eyed nine-year-old. The whole thing nearly happened. Only when Xavi’s mum, Maria Merce, literally told her husband that this was a matter for divorce if her youngest son went to Serie A, were AC Milan informed that the deal was off.

Xavi was going to make the best of life in a trophy-less, rudderless Camp Nou era … and that didn’t work out too badly. In fact, there are more things that unite Ancelotti and Xavi than divide them.

The pair were positionally similar as players: each of them excelled in organising and attacking midfield. Each of them made their debut aged 18; between them, they lifted the Champions League trophy nine times. They left Barcelona and Madrid in June 2015 respectively — Ancelotti sacked for failing in the Champions League and LaLiga; Xavi with a full Camp Nou, Bruce Springsteen booming out on the tannoy, all his family there in tears and three trophies, his second Treble for the club.

They don’t coach the same way, though, nor do they have identical philosophies about how they want their teams to play: Ancelotti is the specialist in “I’ll adapt to what I’ve been given,” while Xavi is the seeker of the Holy Grail of positional, possession, pressing, 4-3-3 football. But they are incredibly similar in what is now almost the most difficult facet of any coach’s work at an elite club packed with superstars: player whispering.

John Terry told Ancelotti’s ghost writer in his book “Quiet Leadership” that “you know his training’s excellent, but it’s the personal touches — asking about the family, caring about the off-field stuff — that for me is why the players love him. Instead of being distant, it’s always that group mentality.” Change the name Carlo to Xavi and despite the vast disparity in coaching experience, the same words could apply to the Catalan.

Outwardly, each of them is an absolute gentleman: humorous, optimistic, open, upbeat, wonderful company replete with stories and acquired wisdom. They’re still passionately obsessed with the sport itself and not just their own careers, but the men who make football great. Little changes behind the scenes, but each of them again possesses an unflinchingly harsh side if they feel those working for them aren’t fully “on it.”

At half-time during their elimination from the Champions League last month, Xavi let his players have an absolute earful in the dressing room: his words would have stripped paint. Post-match he talked about how “FC Barcelona deserves better than what we’ve seen: a new era starts here and now.”

Ancelotti rarely shows the steely edge, either publicly or to his squad, that all his ex-players and ex-assistants swear can be unleashed if his standards aren’t being met. Once, when in charge of Paris Saint-Germain, during a game against Evian in which they weren’t doing well, the Italian with the caterpillar eyebrows lost his temper so badly at half-time that he punched the door open to the extent that his assistant, Paul Clement, thought that he might have damaged himself. Ancelotti then took a running kick at a crate on the floor, which flew off and cracked Zlatan Ibrahimovic in the head.

During Ancelotti’s previous two seasons in charge at the Bernabeu, Xavi the player got the better of him — just. The Clasico count was 3-2 in Barcelona’s favour, though one of Ancelotti’s wins was the Copa del Rey final; perhaps, pound-for-pound, honours were even?

Soon after they both left their respective clubs in June 2015, they were reunited at the Leaders Conference in London, where Xavi was asked to present Ancelotti with an award. His view was: “It’s an honour to give a prize like this to Carlo, who’s been exemplary in every country where he’s coached. He’s won trophies in every league where he’s worked but, above simply winning and losing, he’s always set standards: respectful without fail, to his players, his rivals, referees. I’m proud to know him.”

Ancelotti’s response, typically, was: “Xavi is marvelous, a great example for everyone in football. Beyond his huge quality as a player, he’s always shown fantastic attitude and behaviour on the pitch.”

It was something of a love-in from the two. Though they may disagree, gesticulate and perhaps even briefly fall out on Wednesday, and though they are in markedly different phases of their coaching careers, Ancelotti and Xavi share far more in common than what divides them. Magnificent midfielders, cracking coaches, football-obsessives. Decent men.