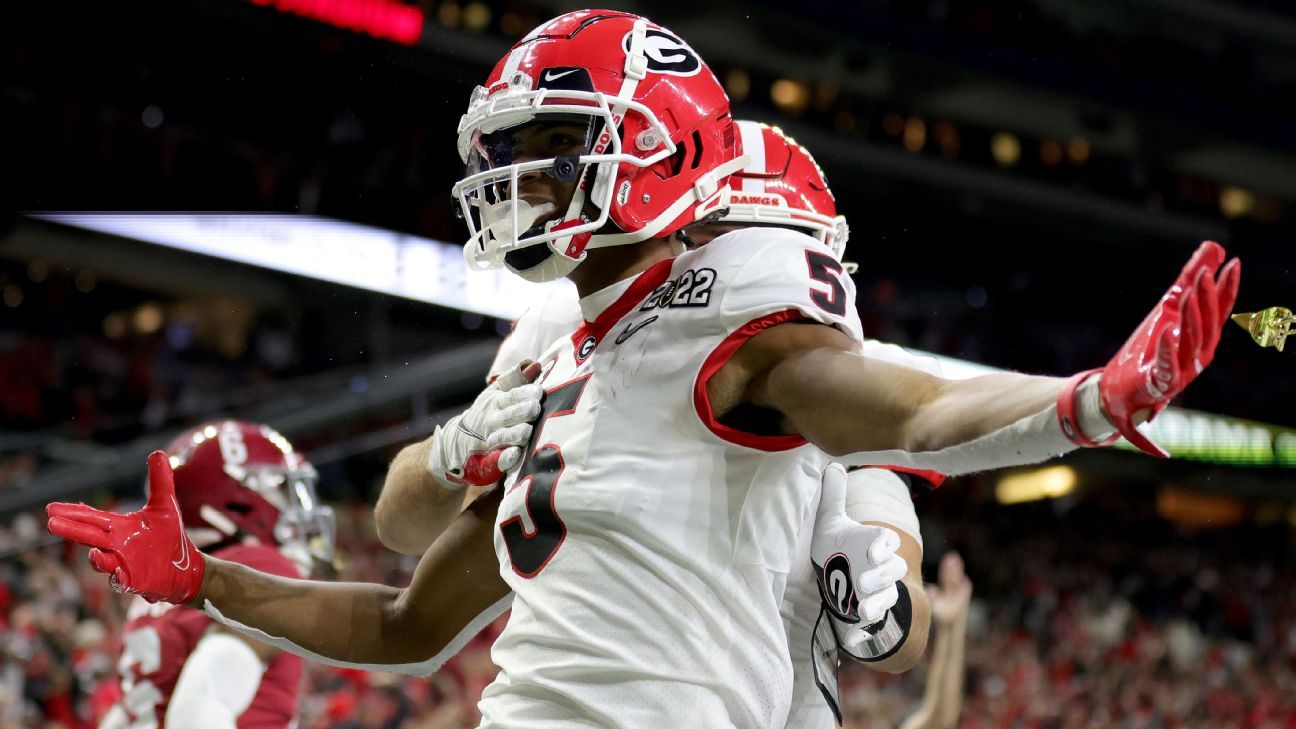 INDIANAPOLIS — Georgia‘s 41-year wait is over.

As the clock expired, the Georgia assistant coaches bolted to the elevators in the shaking press box at Lucas Oil Stadium, with one yelling, “Hell yeah!” as they thundered out cheering together.

While it was a familiar matchup featuring two teams that faced each other in the 2018 national title game and again in this year’s SEC Championship Game — both Alabama wins — it was a wildly different outcome before an announced crowd of 68,311. In the 2018 national championship, Alabama beat Georgia in overtime 26-23.

Some things do change.

Alabama’s streak of seven wins in the series — a streak that began in 2008 — was broken. Alabama coach Nick Saban is now 25-2 against his former assistants, with both losses coming this season — Monday night against Georgia coach Kirby Smart, who served under him at Alabama, and during the regular season against Texas A&M‘s Jimbo Fisher, who was Saban’s offensive coordinator at LSU.

In spite of the critics who lamented the rematch, there was no shortage of drama or entertainment between the all-too familiar foes. What began as a defensive slugfest with no touchdowns in the first half evolved into a showcase of big plays, with both teams trading touchdowns and missing two-point conversions in the fourth quarter. They delivered a thriller that was 180 degrees different from their game a month ago in the SEC championship, when Alabama manhandled Georgia up front for a resounding 41-24 win.

Monday’s title game was littered with costly penalties, and one bizarre ruling on the field that led to an 18-13 Alabama lead. With 11:35 remaining, the officials ruled that Georgia quarterback Stetson Bennett fumbled the ball when he was sacked by Christian Harris, and that Alabama’s Brian Branch recovered it just before he ran out of bounds, landing the Tide on Georgia’s 16-yard line.

At first glance it looked like it was an incomplete pass, but the ball bounced before it went out of bounds, and Branch snagged it, with replay video showing his foot still inbounds. A few plays later, Young eluded the rush and found Cameron Latu for a 3-yard touchdown that put Alabama up 18-13 with 10:14 left in the fourth.

It began as a difficult night for Bennett, who was sacked four times, flagged for intentional grounding twice and had the fumble. In the end, though, the former walk-on continued to do what he’s done his entire career: overcome obstacles and naysayers.

With 8:09 remaining, Bennett found Adonai Mitchell for a 40-yard touchdown pass that gave the Bulldogs a precarious 19-18 lead. Georgia, which had a stagnant passing game for most of the night, covered 75 yards in four plays on that drive, but came up short on the two-point conversion.

With 3:33 to play, Bennett completed a 15-yard touchdown pass to freshman phenom tight end Brock Bowers, finally giving Georgia a cushion in an otherwise tight game. Bennett would finish the night 17-for-26 with 224 yards and no interceptions en route to being named the offensive player of the game.

With both quarterbacks struggling early, their smashmouth defenses took center stage. Alabama’s 17-play drive that ate 7:45 off the clock ended with a blocked 48-yard field goal attempt when Jalen Carter leapt up and got his hand on it. It was the first time Alabama had a field goal blocked since 2015. The play set up Georgia on its own 20-yard line, a drive that would give the Bulldogs their first lead of the game.

It was the first time in the CFP era that neither team scored a touchdown in the first half, and the five field goals tied the most in a BCS/CFP national championship game. Georgia’s six points were its fewest in a first half this season.

Early in the third quarter, Georgia was having success with its run game, as fans were chanting “Zeuuuuus,” the nickname of tailback Zamir White. He led the Bulldogs with 84 yards, one touchdown and 6.5 yards per carry on 13 carries.

About three minutes into the second quarter, Alabama star receiver Jameson Williams suffered a left leg injury following a spectacular 40-yard catch that ultimately helped the Tide to a 6-3 lead. Williams, a likely first-round NFL draft pick, was able to walk to the locker room on his own.

It was a significant blow to Alabama’s offense, which entered the game without its second-leading receiver, John Metchie III, who suffered a season-ending torn ACL in the conference title game. Entering Monday night, Williams and Metchie had accounted for 56% of the Tide’s receiving yards.

This is just the third time since the BCS debuted in 1998 that there were multiple lead changes in the fourth quarter of a college football championship game:

And yet it still wasn’t enough to derail the Tide’s passing game.

Alabama’s remarkable depth at the position opened the door for freshman receiver Agiye Hall, who entered the game having been targeted just three times all season. With Metchie and Williams out, he was targeted four times in the first half.

“We got other players that have an opportunity,” Saban told ESPN’s Holly Rowe at halftime. “There are a lot of young guys out there. They’ve got talent, so they’ve got to play with competitive character. They don’t have the experience, but they’re going to get it tonight.”

It wasn’t enough, though.

The SEC is the only conference to have had a team in the CFP every year, and it was the second time Alabama and Georgia played for the national title. Prior to kickoff, a reporter asked SEC commissioner Greg Sankey, “Who wins tonight?”

“I do,” Sankey deadpanned.

Indeed, it was another win for the entire conference on college football’s biggest stage — again.