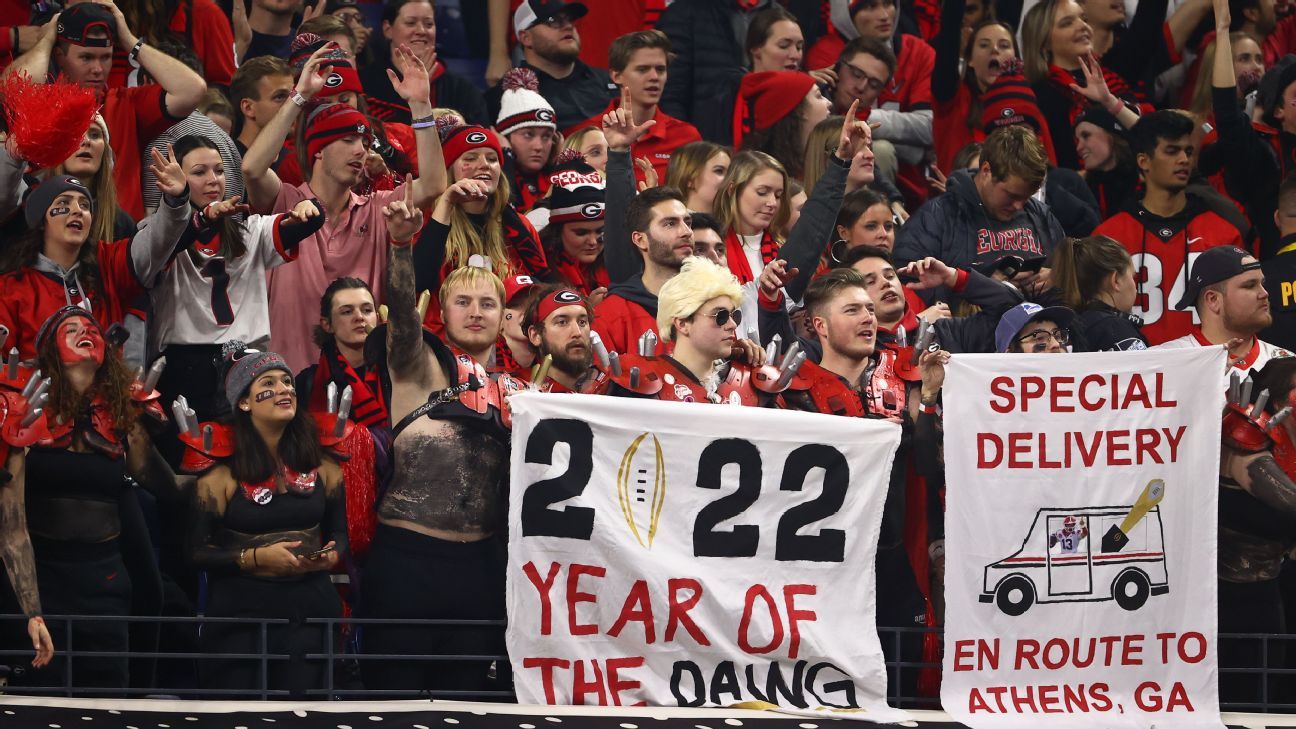 INDIANAPOLIS — Along Highway 15, on a small patch of red clay near Sandersville, Georgia, sits an 84-year-old wooden barn with a rusted tin roof and weathered pine boards.

The barn belongs to the Hitchcock family, which has operated a 2,500-acre farm for more than a century. Over the years, the barn has served as a general store, storage facility and, for the last 21 years, a barometer for how the University of Georgia’s football team is playing.

In 2000, when James and Jonathan Hitchcock and their cousin, Ross Smith, were convinced the Bulldogs were playing the wrong quarterback (sound familiar?), the Hitchcocks’ father, Waylon, came up with an idea.

“Why don’t you go up there and paint the barn and let people know how you feel?” Waylon Hitchcock said.

So the Hitchcock brothers and Smith purchased a few cans of spray paint and let the world know exactly how they felt about Quincy Carter starting over Cory Phillips: “To Hell With Carter; Phillips for President.”

“We were a lot more critical when we were younger,” Smith said. “We put some pretty aggressive messages up there. Before Facebook, you never knew how far it would reach. It was basically people taking photos and then texting them out.”

Every season, thousands of Georgia football fans pass by the barn while making the pilgrimage south for the rivalry game against Florida, or those traveling north for home games in Athens. Smith and the Hitchcock brothers used to update the sign every two or three weeks; now, with their families and careers taking priority, they change it two to three times per season. Some of their memorable messages have included: “Attack the Day,” “We’re Not Going Anywhere,” and, more recently, “You’re Either Elite, Or You’re Not.”

For the cynical Georgia fans, however, they might have just saved their paint and left the same old, tired message: “Wait ‘Til Next Year.”

Before Monday night’s 33-18 win against No. 1 Alabama, the No. 3 Bulldogs hadn’t won a national championship since Herschel Walker, now a candidate for the U.S. Senate in the state, led them to a victory against Notre Dame in the Sugar Bowl after the 1980 season. While Moses might have wandered through the desert for 40 years, Georgia fans have drowned in a sea of disappointment for 41.

How long has it been? The Rubik’s cube debuted only a few months before the Bulldogs last won a title and it has felt like they’ve been unable to solve it ever since. That same year, CNN opened its doors down the road in Atlanta. The Bulldogs played 514 games since they last won it all. They won 368, lost 140 and tied five. They’d won plenty of big games over the last four decades-plus-but not the one that mattered most.

For so long, Athens was the drinking town with the football problem. If Georgia turned out defensive tackles like the state produces country music stars, the drought would have ended long ago.

“You just kind of feel like at some point, your time is going to come, especially a program like Georgia,” one of those musicians, Jason Aldean, told ESPN on Monday. “As a lifelong fan, I think it’s just kind of getting the monkey off our back. As a fan, you kind of have the expectation that maybe this is our year. We’ve been close, and Alabama seems to be the one that’s always standing in our way.”

It wasn’t just that Georgia hadn’t won a national championship since 1980. It was worse because it seemed like every rival around them had won one (or more) in the last 41 years. Alabama won seven; Clemson (with three Georgia high school quarterbacks), Florida State and Florida claimed three; Auburn and Tennessee got one each; and even Georgia Tech won half of one. For so many years, the Bulldogs felt like the last kid left in the kickball line.

When Walker led Georgia to its first national championship in 38 years in 1980, the late Southern humorist and columnist Lewis Grizzard described the scene in the Louisiana Superdome like this: “A female member of the Notre Dame band, holding onto her flute as she surveyed the incredible scene before her, said, ‘If it meant that much, I’m glad Georgia won.’ It meant that much. Grown men cried. A man kissed Georgia defensive coach Erskine Russell squarely on the top of his bald head. Erk just smiled. I saw a man get down on his all fours and bark like a wild dog (dawg) and try to bite a passerby.”

No matter how hard they might have tried, Georgia fans couldn’t get on the field at Lucas Oil Field on Monday night. But tens of thousands of them traveled to Indianapolis from Athens and Augusta, Columbus and Carrollton, Savannah and Sandersville, and every little Georgia town in between, to bark like mad because they believed their team’s time had finally arrived.

And grown men and women did cry again on Monday night. As they celebrated wildly, they hugged anyone in sight. And they barked and sang “Glory, Glory to old Georgia” long into the night. At the famous St. Elmo Steak House in Indianapolis on Sunday, someone called the cops on Georgia fans who were barking and screaming, “Who’s that coming down the track? It’s a mean machine in Red & Black.” There probably aren’t enough paddy wagons in Indiana for what was going to happen early Tuesday morning.

“There’s going to be some property torn up in Indianapolis tonight!” Georgia coach Kirby Smart told the crowd, referencing a famous call from 1980 by the team’s legendary announcer, the late Larry Munson.

This championship meant as much, or maybe even more, than the last one because there had been so many near-misses. In 1982, when Walker won the Heisman Trophy, the No. 1-ranked Bulldogs lost to No. 2 Penn State 27-23 in the Sugar Bowl. On Monday night, a Georgia fan spotted the Penn State quarterback, ESPN radio analyst Todd Blackledge, in the press box and told him, “You broke my heart on New Year’s Day in 1983.”

“You’re over it now, aren’t you?” Blackledge asked him.

“Never,” the Georgia fan told him.

The more recent near-misses, nearly all of them against nemesis Alabama, have been even more painful. The Bulldogs had lost seven games in a row to the Crimson Tide, three in the SEC championship game and one in the 2017 CFP National Championship. Under former coach Mark Richt, Georgia lost the 2012 SEC championship game because, of all things, it caught a pass at Alabama’s 5-yard line and time ran out in a 32-28 loss. The last time the teams played for a national title, the Tide won 26-23 on Tua Tagovailoa’s 41-yard touchdown pass to DeVonta Smith on second-and-26 in overtime.

This season, the Bulldogs were ranked No. 1 in the country for most of the season and had a menacing defense that was as good as any the program ever had. But when Georgia faced Alabama in the SEC championship game on Dec. 4, the Tide won 41-24. Alabama quarterback Bryce Young wrapped up the Heisman Trophy by throwing for 421 yards with three touchdowns.

Georgia football has created more scar tissue than a surgeon, so its fans had to know the long-anticipated title wouldn’t come easy. After the teams traded field goals for much of the first three quarters on Monday night, the Bulldogs finally took a 13-9 lead on Zamir White’s 1-yard run with 1:20 left in the third. The Tide kicked a field goal and what happened next probably had every Georgia fan thinking, “Not again.”

Holding a 13-12 lead, Georgia faced third-and-8 at its 27-yard line. Quarterback Stetson Bennett took the snap and dropped back, but couldn’t get away from Tide linebacker Christian Harris. Harris knocked the ball out of Bennett’s hand, it toppled 14 yards up the field, and safety Brian Branch grabbed it just before stepping out of bounds. Smart argued with officials that it was an incomplete pass, but instant replay upheld the on-field ruling of a fumble. Alabama scored five plays later for an 18-13 lead. Georgia fans had seen this horror flick too many times before.

Bryce Young gets picked off by Kelee Ringo, who takes it to the house to seal Georgia’s win in the College Football Playoff championship game.

That’s why, even after Bennett redeemed himself with two touchdown passes in the fourth quarter to put the Bulldogs ahead, 26-18, Georgia fans still held their breath. It was a one-score game and there was so much time left. When freshman cornerback Kelee Ringo intercepted Young’s pass in the final minute and raced down the right sideline, nearly every Georgia fan in the house was probably screaming, “Get down! Get down!” But Ringo ended up taking the pick to the house to put a bow on the program’s biggest win in nearly a half-century.

“I just knew there was going to be no way we were going to let a turnover like that stop us from winning a national championship,” Bennett said. “I wasn’t going to be the reason we lost.”

Bennett, a former walk-on, was one of the reasons the Bulldogs won. He completed 17 of 26 passes for 224 yards with two touchdowns and was named the game’s most outstanding offensive player.

“They’re going to be writing a lot of songs about Stetson Bennett,” Aldean said.

Sometime, during the next couple of weeks, Smith and the Hitchcock brothers will deliver another message to Georgia fans, one they’ve been waiting to paint for a long, long time: National Champions.

“I’ve been waiting 21 years to paint that one,” Smith said.

Bulldogs fans have been waiting even longer to say it.