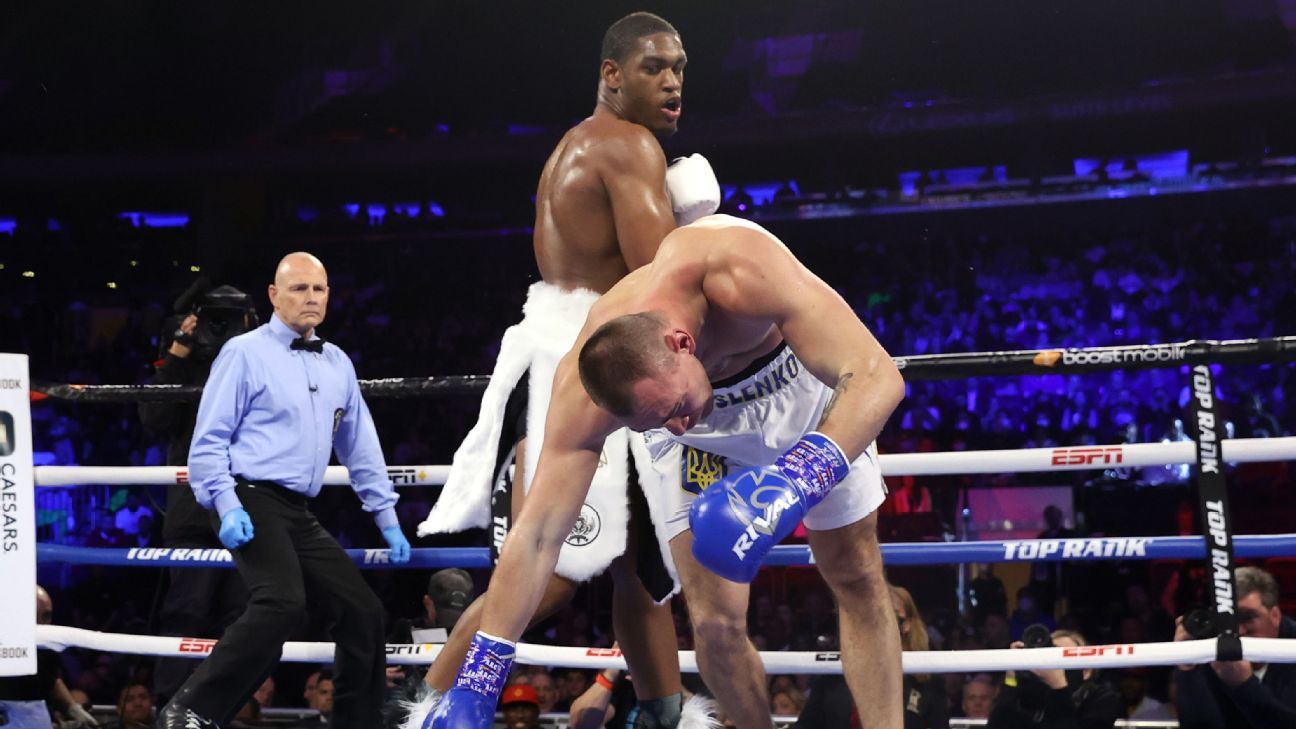 George Kambosos Jr. crashed through the glass ceiling in 2021 with an upset victory over Teofimo Lopez in November, capturing all four of Lopez’s lightweight titles. The 28-year-old Australian wasn’t even on the radar of many in the boxing industry, and he was completely overlooked before he fought Lopez.

On that same night, thousands of miles away, Stephen Fulton capped a banner year with a thrilling victory over Brandon Figueroa to unify 122-pound world titles, after winning one of those titles in January.

Oleksandr Usyk was already a former undisputed cruiserweight champion when he entered the year, but was largely untested at heavyweight until he stepped into the ring with Anthony Joshua — and he dominated the now former unified heavyweight champion. His breakout performance at heavyweight sets the stage for what could be an unpredictable stretch for the big men waiting in the wings — and that could mean big opportunities in the months and years to come.

Heavyweights typically develop more slowly than boxers in other weight classes, and the time is now ripe for some name fighters to reach the contender level. We’ve identified five fighters we believe are on the cusp of truly breaking out in 2022, including a trio of heavyweights.

The 22-year-old Anderson was my prospect of the year for 2021 due in part to his four knockouts in four fights. It appears Anderson has the size and skills to one day win a heavyweight championship, but to this point, he hasn’t arrived at that level just yet. So far, he’s fought soft opposition, and that’s fine as he’s developing.

But it’s clear that he’s more than ready for better competition — the kind that will transform him into a contender. In order for the former Tyson Fury sparring partner to build upon his big 2021, he’ll need to face a gatekeeper – a former or fringe title contender or two, like Derek Chisora, Sergey Kuzmin or Carlos Takam.

If he can dispense with fighters at that level in the same manner he handled lesser boxers, Anderson will be on the doorstep of a title shot by the end of 2022.

With Top Rank’s expert matchmakers Brad Goodman and Bruce Trampler (along with manager James Prince) steering Anderson’s career, the big man should have every opportunity to break out.

Since Yoka captured gold at the 2016 Olympic Games, the now-29-year-old from France has been surrounded by tremendous hype. But as he approaches his 30th birthday in April, Yoka has yet to reach the contender level.

It’s not for lack of talent. At 6-foot-7, 230 pounds, Yoka has the size, strength and punching power to climb to the top. The issue has been inactivity. He received a one-year doping ban in 2018 after failing to provide his whereabouts for drug testing on multiple occasions.

He’s competed more than twice in a year only once, at a time when most prospects are taking four or five annual bouts. When he has competed, Yoka has impressed, particularly in a first-round TKO of Johann Duhuapas in 2020.

Yoka was slated to raise his level of opposition greatly in a fight against fellow undefeated heavyweight Martin Bakole on Jan. 15 in Paris, but the bout was postponed due to COVID restrictions in France. Provided the fight is rescheduled, there’s an opportunity for a statement performance that could lead to more prominence stateside.

Yoka has never fought outside France, but he’s co-promoted by Top Rank, which plans to bring him to the U.S. in 2022.

Since aging journeyman Kevin Johnson lasted the eight-round distance in 2018, only one Hrgovic opponent has made it past Round 3. At 29, the Croatian is now primed for a proper leap in competition. The IBF ordered a title eliminator between Hrgovic and Luis Ortiz, but Ortiz declined the opportunity.

Now, Joseph Parker could step in to face Hrgovic in the eliminator. That would be a tremendous test for Hrgovic. Parker, the former heavyweight titleholder currently ranked the No. 7 in the world by ESPN, owns a win over Andy Ruiz Jr. and is coming off an impressive performance over Chisora.

If Hrgovic can indeed land the Parker fight, he could be one win away from vying for the strap.

The Englishman was set for his first genuine measuring-stick fight, a December matchup with Maxim Vlasov, before suffering a hand injury that scrapped plans. Vlasov was barely edged by Joe Smith Jr. in a spring title fight, and is ranked No. 7 at light heavyweight by ESPN — one spot ahead of Buatsi.

Promoter Eddie Hearn hopes to reschedule the Buatsi-Vlasov bout in early 2022, a matchup that should showcase Buatsi’s immense talent.

The 175-pounder possesses tremendous power and flows his punches seamlessly in combination. But so far, all we’ve had to go on is the eye test as he’s feasted on fighters far below his level.

A dominant victory over Vlasov could set up Buatsi for a light heavyweight title shot later in 2022.

The 29-year-old Matias is a menace at 140 pounds — a volume-punching fighter from Puerto Rico with plenty of strength and power. Matias’ career took a tragic turn following a TKO victory against Maxim Dadashev, when Dadashev later died from injuries sustained in the fight.

Matias was deeply impacted by the horrific circumstances of the fight. Two fights later, he was upset by Petros Ananyan in February 2020. Matias was floored in Round 7 and suffered a unanimous-decision loss, the first of his career.

He rebounded with two stoppage wins against good opposition, over Malik Hawkins and Batyrzhan Jukembayev.

On Jan. 22, Matias will seek redemption in a rematch against Ananyan on Showtime, and a win could propel Matias toward a monster 2022. Matias, with his relentless pressure attack and devastating power, evokes comparisons to former champion Antonio Margarito.