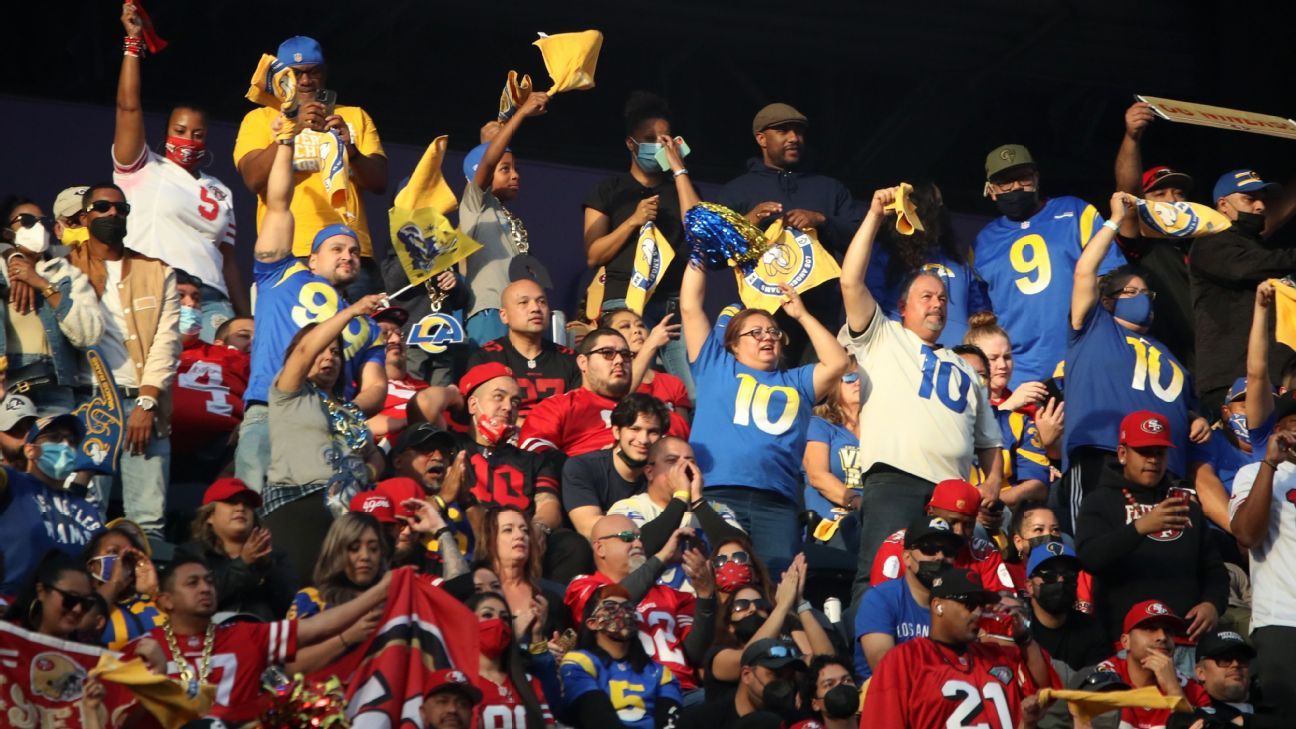 THOUSAND OAKS, Calif. — A day after clinching the NFC West but losing a regular-season finale to the division rival San Francisco 49ers, coach Sean McVay said the Los Angeles Rams were surprised by the volume of Niners fans at SoFi Stadium.

“It did catch us off guard,” McVay said Monday. “Just because of the way that it’s been this year. It’s been great, great atmosphere, great environment. Yesterday was the same thing, but there was a lot of red there. That was definitely a surprise.”

The Rams announced an attendance of 74,447. It appeared as though most were 49ers fans, cheering their team to a victory and playoff berth.

McVay’s admission echoed what quarterback Matthew Stafford said in the immediate aftermath of the 27-24 overtime loss, in which the Rams blew a 17-point first-half lead, and watched as Niners faithful stayed well after the finish to cheer their team.

“It was a tough environment for us to communicate in really the whole second half,” said Stafford, who completed 15 of 16 passes for 153 yards and two touchdowns in the first half, but saw a drop off in production in the second as he finished 21 of 32 for 238 yards with three touchdowns and two interceptions, amounting to his third consecutive game with multiple turnovers.

McVay said Monday that a toe injury Stafford sustained during the game dictated some of the late-game play calling.

“It wasn’t like he was going to come out of the game,” McVay said. “There’s just certain things that maybe you would potentially call on those scenarios that you’re not as comfortable with the ability to execute at the level that you want.”

McVay does not anticipate that Stafford’s toe will be an issue moving forward. “He felt good today,” McVay said. “He was just typically sore.”

Despite suffering a sixth straight loss to the 49ers (10-7), the Rams (12-5) still managed to clinch their third division title in five seasons by way of the Seattle Seahawks (7-10) defeating the Arizona Cardinals (11-6).

McVay admitted Monday that he felt “pissed” after the game, but said he had since moved on to appreciate their 12-win season and focus on an upcoming matchup against another division foe.

“I was disappointed yesterday. That’s real,” McVay said. “But what I am interested in is spending the energy on the things that are in alignment with what’s next and what we can control.”

The Rams enter the playoffs as the No. 4 seed and will host the No. 5 seeded Arizona Cardinals, who they split the regular-season series with, in a wild-card game at SoFi Stadium on Monday Night Football.

McVay said going into the postseason off a loss “doesn’t mean s—,” and expressed confidence that the Rams, who bounced back from a three-game losing streak in November to win five straight, have the makeup to move forward.

“You can always draw on previous experiences going into the playoffs,” said McVay, who has earned a playoff berth in four of his five seasons as coach. “Winning or losing really hasn’t been much of a factor on how teams do dependent upon whichever lens you want to look at it through.”

The Rams will enter the playoffs with some uncertainty in their secondary after suffering a series of injuries.

Safety and defensive signal caller Jordan Fuller suffered an ankle injury that will require season-ending surgery. McVay said Nick Scott or Terrell Burgess were among candidates to fill in at safety and that cornerback Jalen Ramsey, who took over as the signal caller after Fuller was sidelined, was a candidate to continue the duty.

Safety Taylor Rapp, who grabbed his fourth interception of the season against the 49ers, has entered concussion protocol and his timetable for return is uncertain.