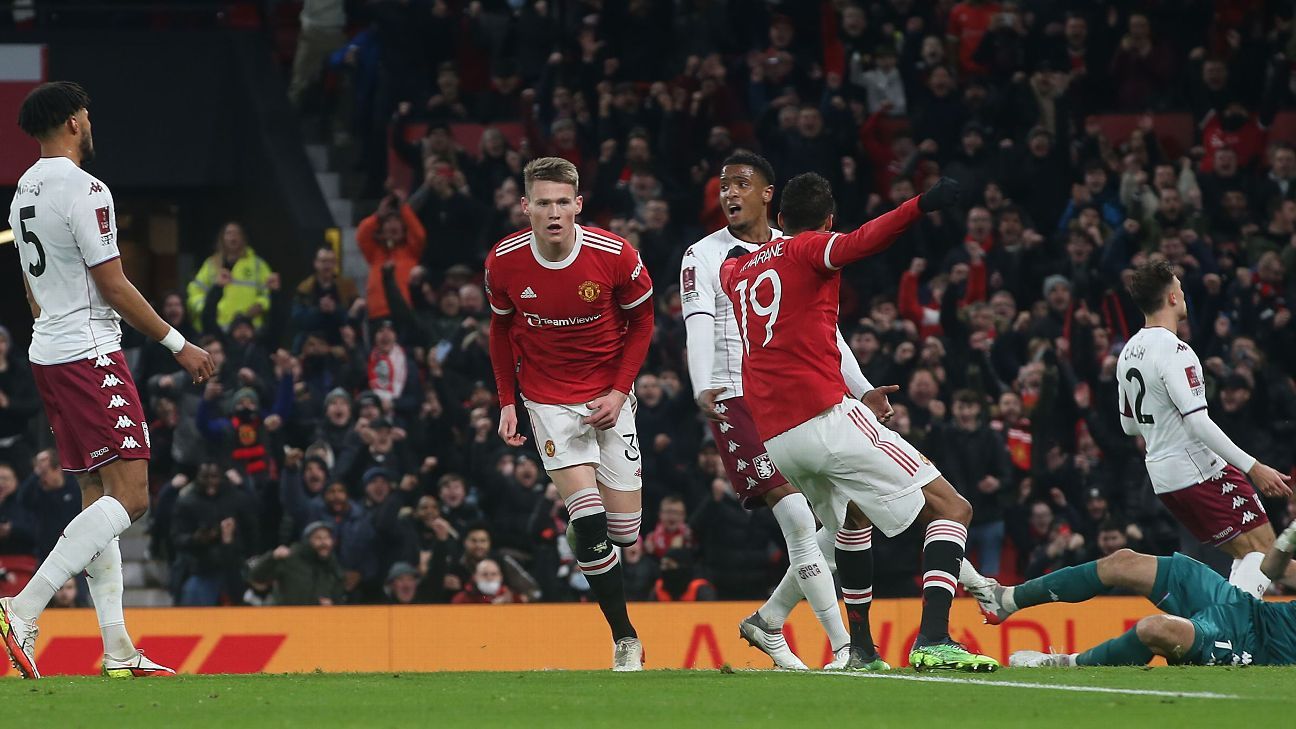 MANCHESTER, England — There was an FA Cup shock at Old Trafford on Monday night as Manchester United somehow managed to cling on against Aston Villa to scrape through their third round tie with a 1-0 win. Steven Gerrard’s side had two goals ruled out, one after a lengthy VAR stoppage, hit the crossbar and forced David de Gea into two impressive saves but were undone by Scott McTominay‘s early header.

McTominay was named man-of-the-match but there was very little competition for the award. United, struggling with the ball and without it, are not playing well and Villa will be looking forward to the two teams meeting again in the Premier League on Saturday. Middlesbrough, waiting in the fourth round, will be licking their lips, too.

“To say that this was a perfect game, nobody would believe that of course it was not,” said United manager Ralf Rangnick afterwards. “We still have quite a few things we can get better at but a clean sheet was important today and we worked together. Still a lot of things to improve but it is easier to do that with a 1-0 win.

“We fought well as a team together when it was important. In the end it was a good win. That was our goal, to proceed to the next round.”

United, without the injured Cristiano Ronaldo, were outplayed to such an extent that after 65 minutes the statistics showed they had just 37% possession. When they did have the ball, it was wasted. Pass after pass slipped by its target, either finding a white Villa shirt or the advertising boards. So much for Rangnick helping United to control games. It said everything that with 20 minutes to go the German was forced to replace his striker, Edinson Cavani, with midfielder Donny van de Beek.

When the final whistle went Mason Greenwood and Luke Shaw collapsed to the floor. Victor Lindelof slumped over. It was unsurprising given how much of the night had been spent chasing shadows. McTominay, along with Raphael Varane, was one of the few who emerged with any credit and not just because he scored the only goal, as he did against Watford in the third round last season. In the first minute he flew into a thumping challenge on the touchline in front of Gerrard that drew a round of applause from Rangnick. After heading in Fred‘s peach of a cross in the eighth minute, he was out first to block Jacob Ramsey‘s shot and when Marcus Rashford scuffed a chance just before half-time he was quickest to the loose ball on the edge of the box, charging past two Villa defenders.

McTominay might not have the sponsors rushing to hand over their money or tens of millions of followers on social media, but he is dependable and functional and United could use some of that right now. When he was announced as man-of-the-match, it prompted the biggest roar of the night.

Minutes earlier there had been loud groans as Rashford, out of sorts again, appeared to stop despite Mason Greenwood’s shot rebounding back in the area off Emiliano Martinez. Rashford and Fred were among the players who decided to take to social media to hit back at reports of dressing room unrest in the wake of the 1-0 defeat to Wolves last week. McTominay did his talking on the pitch.

Ahead of kick-off, a banner was unveiled in the stands with pictures of former captains Bryan Robson, Eric Cantona and Roy Keane alongside the word “standards”. If nothing else, McTominay at least has some of the same grit and determination. Suspended for United’s visit to Villa Park this weekend, he will be a big miss.

“He is an academy boy, his energy is amazing,” said Rangnick. “He now also starts scoring goals and also with some leadership skills. I wouldn’t be surprised if in a couple of years he would be the captain of this team.”

Villa have now lost their last six FA Cup games but they deserved more here. Gerrard, jeered mercilessly throughout, was left to rue the decision to rule out Danny Ings‘ goal in the second half after Ramsey had returned from an offside position to block off Cavani as John McGinn‘s free-kick came into the box. It took referee Michael Oliver and VAR Darren England nearly four minutes to reach the conclusion the goal shouldn’t stand.

“They have looked at two or three things in it,” said Gerrard. “When VAR is there and they make a decision you have to accept it. There is nothing you can do to change it. The easy way out is to blame luck and the officials, we won’t do that.

“We need to focus on other things, not the VAR. It’s not the reason we lost. We dominated for large parts but we were not ruthless enough.”

Despite the result and another early FA Cup exit, Gerrard said he could have “no complaints” about Villa’s performance. Rangnick, meanwhile, was left with more questions than answers ahead of another clash with Villa on Saturday.