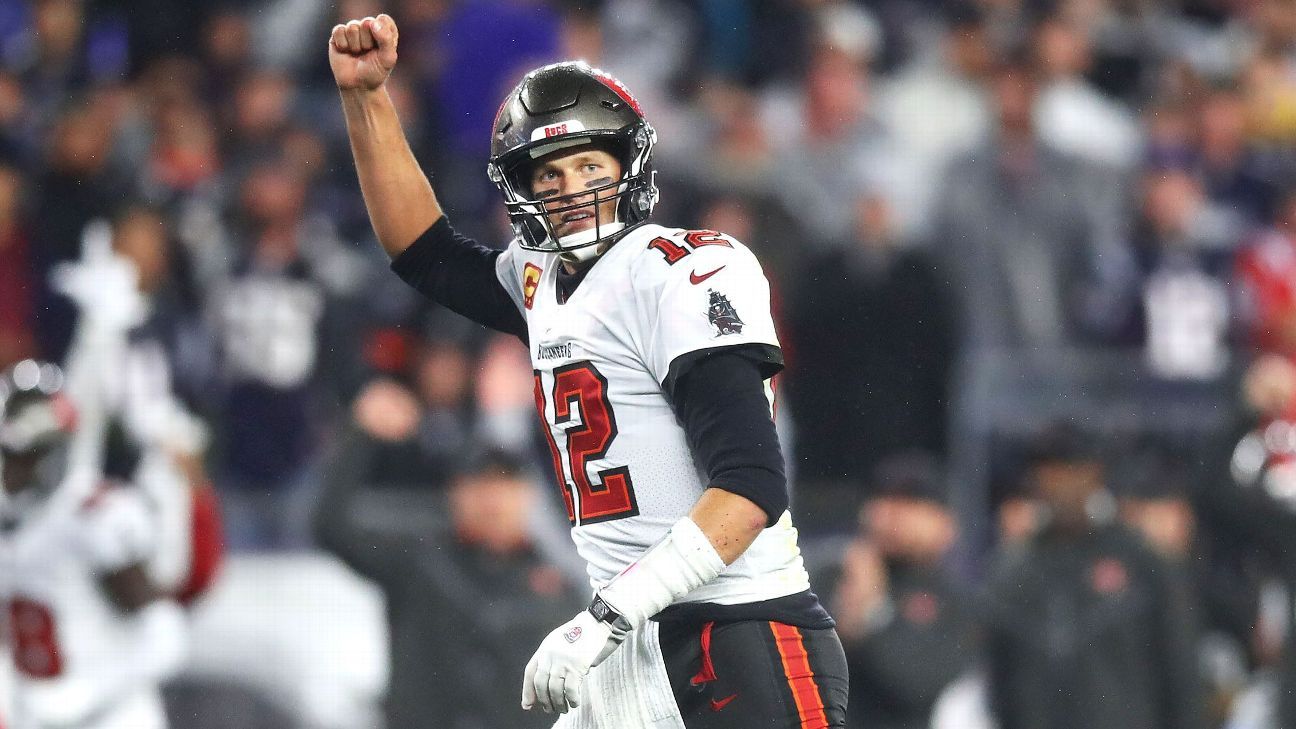 TAMPA, Fla. — On the heels of Tampa Bay Buccaneers quarterback Tom Brady‘s three-touchdown performance in a 41-17 win over the Carolina Panthers, which ended in “MVP!” chants from fans inside Raymond James Stadium, coach Bruce Arians made a strong case for his 44-year-old signal caller to win the award.

“I think if he doesn’t get it, it’s a travesty,” Arians said Monday, as his team began preparations to host the Philadelphia Eagles in the Super Wild Card this weekend. “Most completions ever, 5,000 yards, touchdowns — the whole nine yards. To me, it’s not even a close race.”

Brady finished the 2021 regular season with 719 passing attempts, 485 completions, 5,316 passing yards and 43 touchdown passes — all tops in the league — making him just the third quarterback along with Drew Brees (2018) and Peyton Manning (2013) to lead the league in all four major statistical categories since 1991.

Brady also broke Brees’ all-time record for most career passing yards in his Week 4 return victory over the New England Patriots. He then broke Brees’ career completions record while throwing his 700th touchdown pass in a 33-27 overtime victory against the Buffalo Bills.

“It just shows what his work ethic is, how dedicated he is to the game of football and just how talented he is,” tight end Rob Gronkowski said of Brady’s record-breaking. “Just his determination week in and week out — it’s just unbelievable. And it’s just surreal how he’s pulling it off at age 44 and just coming out here like he’s in his twenties still, just winging that ball, zipping it where it needs to be, making fantastic throws week in and week out.

Brady’s been voted league MVP three times in his career: 2007, 2010 and most recently in 2017. He was also voted NFL Offensive Player of the Year twice, in 2007 and 2010. And in the postseason, he’s been awarded Super Bowl MVP honors five times: Super Bowl XXXVI, XXXVIII, XLIX, LI, LV.

“Tom’s the MVP every year,” Gronkowski said. “Just the way he adjusts on the fly to his personnel, just trying to get the ball into the best players’ hands or the best matchup on that current play — he’s just always ready to go no matter what the situation is. He’s the MVP every year.”

He faces his stiffest competition from Green Bay Packers quarterback Aaron Rodgers, who has also won the award three times in his career: 2011, 2014 and 2020 and was named Super Bowl XLV MVP. The MVP award is chosen by a group of 50 writers prior to the postseason. Rodgers was a -400 favorite at Caesars Sportsbook entering the NFL’s Week 18 games, while Brady was +550.

While Brady led the Bucs to a 13-4 record and the No. 2 seed in the NFC — the same as Rodgers — the Packers clinched the No. 1 seed because their 9-3 conference record bested the Bucs’ 8-4 conference record. The Packers were also in the driver’s seat through much of the season, which may help Rodgers’ case the most, although one voter, Hub Arkush, spoke out recently saying he will not vote for Rodgers due to the QB’s stance on vaccination.

But the Bucs need to get healthy first. Arians said Monday running back Leonard Fournette and outside linebackers Shaq Barrett and Jason Pierre-Paul should return this week.

“Leonard looks great. He’s been working good. He should be back,” Arians said. “Shaq and JPP should both be back. Lavonte [David] – he’ll be the one that’s the closest, but he is starting to move around pretty good so we’ll wait and see. I’m still waiting to hear about [cornerback] Jamel Dean. That’s the one that’s got me concerned from this ball game. But those guys that are on IR that have been out, I expect all to be back. Maybe Lavonte could not.”

Cyril Grayson, who stepped in for Antonio Brown and caught the game-winning touchdown against the New York Jets in Week 17, left Sunday’s game against the Panthers with a hamstring injury and did no return. Arians said of Grayson: “It’s not quite as bad as you thought, but his availability this week will be in question.”

Trade grades: Horvat fills a need for the Islanders — but at a high cost
Fitter Mickelson expecting a ‘really good year’
Ingram nets 13 in long-awaited return for Pels
Early MLB 2023 trade deadline preview: Player most likely to be traded for all 30 teams
Bradley: An open letter to Beterbiev and Yarde — with a game plan for each