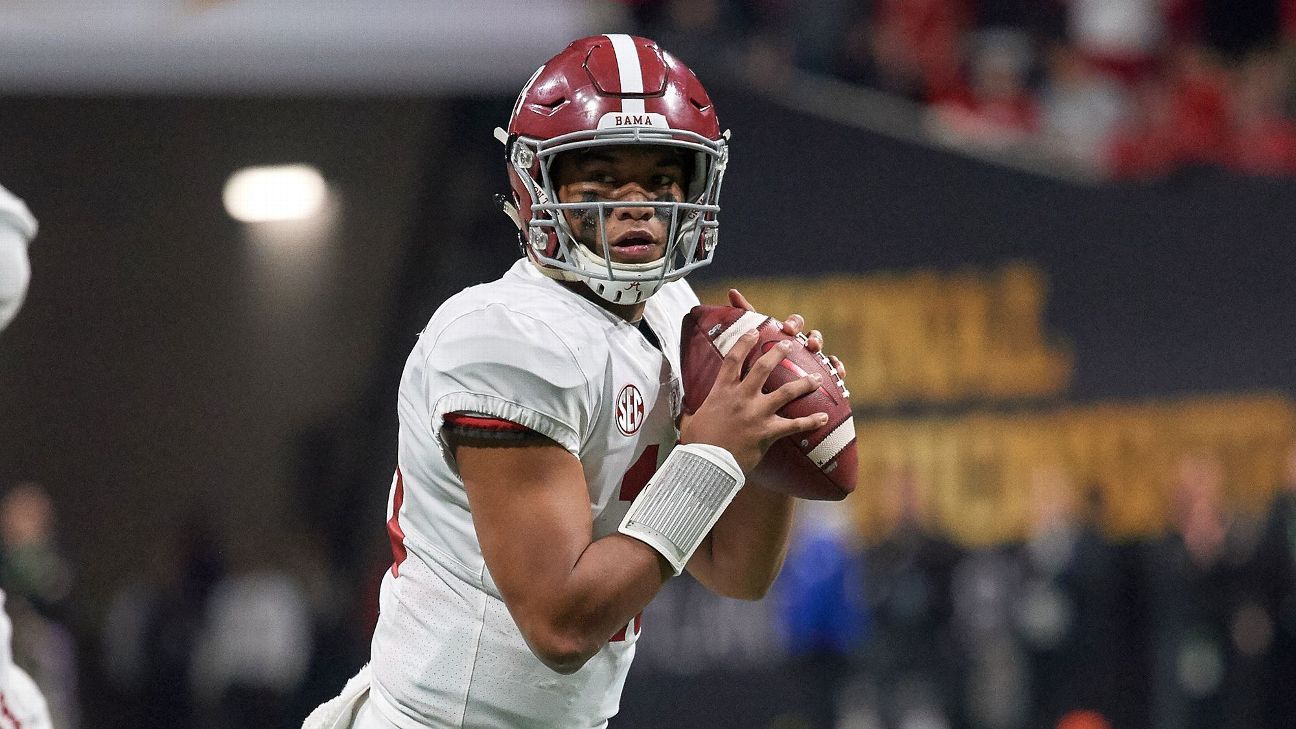 INDIANAPOLIS — As Alabama and Georgia prepare to play each other again (8 p.m. ET Monday on ESPN/ESPN App), it is hard to forget what happened the last time they met in the national championship game.

Because what happened was so unforgettable.

Second-and-26 will always live in college football history, but especially in the histories Alabama and Georgia share. When backup quarterback Tua Tagovailoa threw a perfectly placed pass to DeVonta Smith, for a 41-yard touchdown in overtime, he not only won the championship for Alabama, he broke Georgia hearts all over again.

“I think I blacked out a little bit then when that happened,” said former Alabama assistant Brent Key, now an assistant at Georgia Tech. “Next thing you know everyone’s running out on the field, and we won it. It was an unbelievable game to end the season that year.”

“It was probably the most devastated locker room I have ever been in, as a player or coach,” said former Georgia assistant Shane Beamer, now South Carolina head coach. “I can still see Tua dropping back and throwing, and it’s like slow motion watching it happen.”

Though Key and Beamer are no longer with their respective teams, there remain 15 total players from both rosters who were on the sideline in Atlanta. How that game played out has stayed with them, for obvious reasons.

“I feel like coming in as a freshman and getting that experience as a young guy, sitting back and watching those guys compete for that national championship, it was amazing,” Alabama starting defensive tackle Phidarian Mathis said. “Especially the big-time play Tua made.”

Well before Tagovailoa had a chance to even throw that pass, Georgia controlled the first half, taking a 13-0 lead at halftime as Alabama starting quarterback Jalen Hurts struggled to effectively move the Crimson Tide.

For weeks leading up to the game, speculation centered around Hurts and Tagovailoa, and whether Alabama was starting the right guy at quarterback. Now Alabama coach Nick Saban would have to make a decision.

Beamer remembers going into the coaches’ locker room with Kirby Smart and their staff for a quick conversation before meeting with players.

“I still remember to this day, Kirby saying, ‘Look, Nick’s about to make a change at quarterback. I’m telling you, he’s going to put Tua in.’ And I remember thinking, ‘There ain’t no way he’s taking out Jalen Hurts after all the things Jalen’s done, to put in the backup quarterback at halftime in the national championship game.’ But for whatever reason, Kirby sensed it and felt like it was about to happen.”

From inside the Alabama locker room, then-offensive line coach Brent Key said Saban worked quickly to make the decision to start the third quarter with Tagovailoa behind center.

“Without a doubt, I know Coach Saban played those scenarios out in his head prior to the game,” Key said. “Nothing is left up to chance when it comes to him. But then you’re put on the spot. It’s a very quick amount of time that he’s got to get input, but Coach Saban is going to make the decision that he feels is the best for that football team to win the game.

“The public thinks that you come out, and it’s a fairy tale as the second half went on, but you know, there were still bumps and ups and downs in the second half as we went along.”

That includes an interception Tagovailoa threw just after Georgia took a 20-7 lead in the third quarter. But Georgia quarterback Jake Fromm threw an interception on the following possession, squandering the chance to build on its lead.

Beamer also mentioned another moment that had an impact on the game earlier in the third quarter, a blocked punt that was nullified because the officials called Georgia offside.

“It’s still infamous in Athens that Tyler Simmons was not offside,” Beamer said. “If you say that in Athens, they know exactly what you mean. And he wasn’t. That was a huge play, because now we’re first-and-10 on about the 25-yard line, and really for all intent and purposes, have a chance to put the game away.”

Still, Georgia led 20-10 heading into the fourth quarter, but its offense was unable to move the ball and Tagovailoa started to make plays, throwing a 7-yard touchdown pass to Calvin Ridley with 3:49 left to tie it up.

Andy Pappanastos missed a 36-yard field goal at the end of regulation that would have won the game for Alabama. Headed into overtime, Beamer said he did not sense any lack of confidence or frustration on the Georgia sideline. In fact, the missed field goal helped the team reset.

“We let some opportunities get away in the second half, but here’s another opportunity in overtime to go win this thing,” Beamer said.

Georgia scored a field goal to open overtime. Now it was Alabama’s turn. On first down, Alabama wanted to run a similar play that it ran in its semifinal win over Clemson, when the Tide threw a bubble screen to Damien Harris for a good gain. On this play, Harris once again went in motion, but Tagovailoa faked the screen to try and throw down the field. Georgia had it covered though, and Tagovailoa was sacked.

This made it second-and-26. On the sideline, Key thought to himself, “Holy cow, we’ve got our work cut out for us now.”

Tagovailoa took the snap, and Smith went streaking down the sideline. He delivered the pass to win the championship.

For Alabama’s Brian Robinson Jr., the moment showed him so much more. As a freshman that season, he played a reserve role. But watching freshmen like Tagovailoa and Smith make the big plays to win it meant something a little different.

“The experience with that game just helped me understand the competition level, and if you put Alabama and Georgia football on this stage, usually that’s what it will come down to, two teams brawling, fighting until the end,” Robinson said.

“Everything wasn’t going perfect for us that day. We still had to make some adjustments on the offensive side of the ball and defensive side. And just being a team, just preparing for the opportunity when it came, a lot of guys stepped up when their numbers were called.”

As much jubilation as there was on the Alabama sideline, there was utter devastation in the Georgia locker room, and among Georgia recruits and signees watching from home.

Kearis Jackson arrived in Athens in early January 2018 as a true freshman and was immediately put on the scout team, helping the Bulldogs prepare for the national championship game. Though he was young and raw, Jackson wanted to give the best look possible, to do his small part to help the defense prepare.

Since Jackson wasn’t on the 2017 roster, he couldn’t travel with the team and instead watched from home in Fort Valley, Georgia.

Though Alabama broke the Bulldogs’ hearts, again, those moments in practice sparked something that Jackson carries with him now.

“Being able to watch the game on TV kind of fueled myself that, in the next few months I’m about to be in those same colors with those same guys, [we] can be playing for something that’s bigger than I ever expected, the national championship,” Jackson said. “And today it’s finally presented itself that I’ll be playing in my first national championship. It’s been like a dream come true and a journey as well.”

Georgia quarterback Stetson Bennett was on the scout team, too, as a walk-on freshman in 2017 with no idea what was in store for him, either, several years down the line.

“I was really young, no expectation of playing, absolutely none,” Bennett said. “My only focus was to get the defense ready.”

Now he has a chance to be part of the group to make second-and-26 a little more forgettable.

“It hurt,” said Bennett, reflecting on his time as the scout team quarterback. “You still put the time in just like all our scout team guys do. They want to win just as badly as we do. And to have the opportunity to be the starting quarterback here, I’m lucky and extremely blessed, but it’s also exciting. You come to Georgia because you want these types of games, and we’re playing against the best in the country this week, and I think we’re all ready for it.”