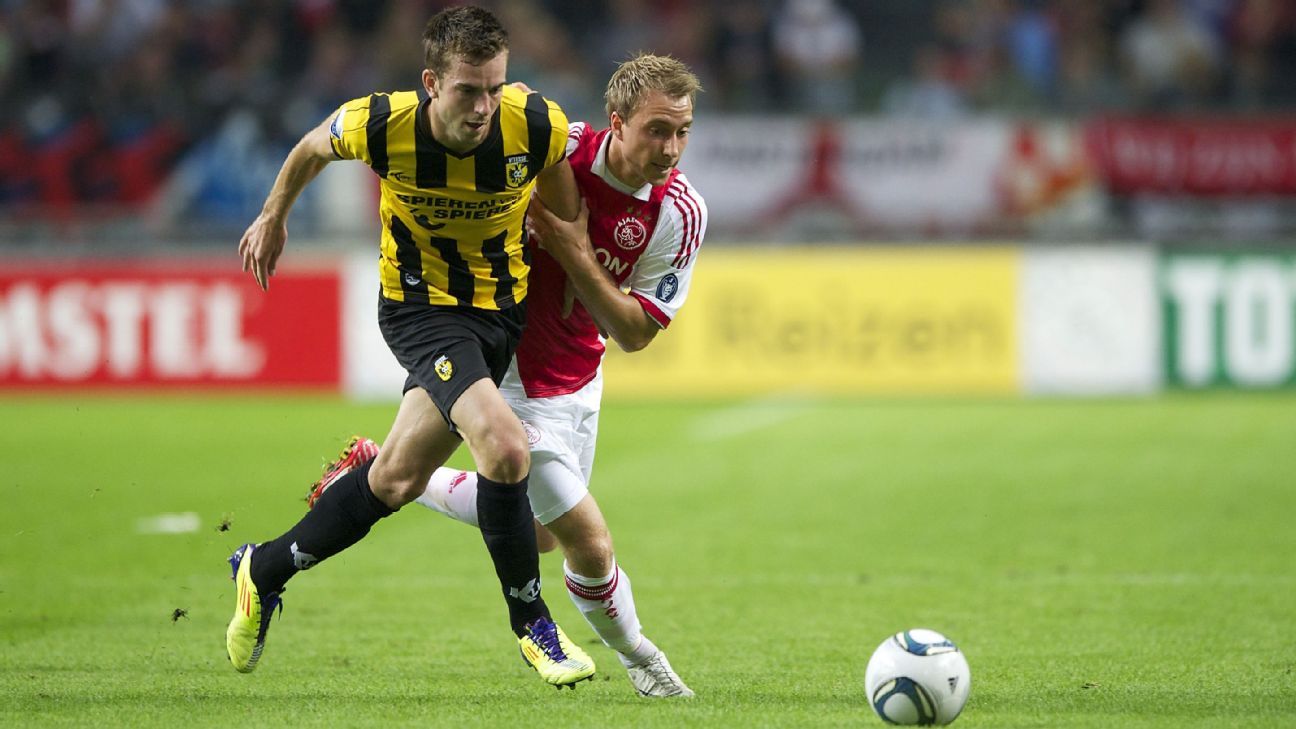 It’s the juxtaposition that gets you. Davy Propper and Christian Eriksen made their professional debuts on the very same day and on Tuesday — 4,370 days later — they made radically different different choices when faced with an almost existential question: How do I feel about football?

One is in love. The other is not.

Christian Eriksen had not kicked a ball in competitive play since that day last June when he collapsed on the pitch during Denmark‘s game with Finland at Euro 2020 and, in his own words, “died for five minutes” after suffering cardiac arrest. The quick intervention of doctors saved his life and he was fitted with an implantable cardioverter defibrillator (ICD). The device allows him to lead a moderately normal life, but it means he will live the rest of his days in the shadow of risk, particularly in situations of high physical and mental stress — like, say, professional football.

– Borden: Copenhagen sends a message of love to Eriksen

And yet, Eriksen wants to come back.

“My goal is to play in the World Cup in Qatar,” Eriksen told Danish television. “I want to play. That’s been my mindset all along… I’m sure I can, because I don’t feel any different. Physically, I’m back in top shape.”

If he does, it won’t be at Inter Milan, the club he joined two years ago and helped to the Serie A title last season. Regulations in Italy do not allow those fitted with ICDs to play competitive sports; on Dec. 17, Inter terminated his contract. The risks are considered far too great. He’ll have to do it elsewhere.

And then there’s Propper, the PSV Eindhoven midfielder. He announced on Tuesday that he was retiring from the game at 30 years old and walking away from the final 18 months of his contract, leaving several million on the table. He said he “gradually lost the love for the game” and no longer “feels comfortable in the world of football.”

The parallels between Propper and Eriksen run deep, and not just because they’re the same age and play the same position.

Both men come from footballing families. Propper’s brothers, Robin and Mike, play respectively for FC Twente in the Dutch top flight and Huissen in the fifth tier. Eriksen’s father, Thomas, was a former footballer-turned-coach, his cousins Andreas and Mathias are also footballers.

Both grew up immersed in the sport; both made it their career. Both were precocious talents, both were formed as footballers in Holland, and both made their professional debuts on Jan. 17, 2010. Propper came on as a substitute for Vitesse Arnhem in a 2-1 defeat at NEC Nijmegen, while Eriksen started for Ajax in a 1-1 draw away to NAC Breda. (NEC and NAC … You can’t make it up.)

They faced each other in the Dutch league, and they later faced each other in the Premier League — Eriksen moved to Tottenham in 2013, Propper to Brighton in 2017 — and both played for their countries, with Eriksen earning 109 caps for Denmark and Propper 19 for the Oranje. And here they are, announcing their diametrically opposite choices on the very same day.

Propper says his disillusionment with the game was gradual: “It was difficult for me to observe the discipline needed to perform at my best and have my life ruled by a hectic football schedule.” When the coronavirus pandemic hit, it was the final blow. He tried to rekindle the love affair at PSV, returning there last summer as a free agent, but to no avail.

Meanwhile Eriksen returned to Milan, where he’d settled, after the Euros and worked to rescind his contract with Inter. He couldn’t play; there was no point. He went through the paperwork and the bureaucracy and underwent more tests. And then, most days, he made the half-hour drive across the border to Switzerland and the Swiss town of Chiasso to train with the local team, who play in the third tier. This month, he’ll look for another club. His agent, Martin Schoots, says a return to the Premier League — where rules on player safety would allow him to play — would “absolutely feel like coming home.”

Professional footballers dedicate their lives to the sport, initially (like the rest of us) out of love at a young age — sometimes later out of money, a sense of duty or competitiveness. At the highest level, when careers end, usually in their 30s, they’re often parents and millionaires. They re-enter society knowing they have lived a dream for the past 20, sometimes 25 years. Real life — as most of us know it — was placed on hold in their early teens. When they go back to it, it sometimes feels like they’ve come out of cryogenic suspended animation. They enter a world where their peers have grown up. (Perhaps that’s why so many cling to the game for as long as they can, trying to reinvent themselves as coaches or pundits.)

Eriksen and Propper are making very different choices, and both are making them free of any kind of financial encumbrance. Eriksen has made tens of millions in his career, and while Propper earned substantially less, he too knows he can live more than comfortably the rest of his life without doing another day’s work.

But there are two factors that unite them. One is love. In Eriksen’s case, it’s love for the game and squeezing out as much as you can out of it for as long as you can. In Propper’s case, it’s love for himself and his family, and the self-care it takes to realize that every moment you’re doing something you don’t like is a moment you’re denying yourself and your loved ones. Most of us don’t have that luxury, because we need the paycheck. He does.

The other, of course, is courage. Both are taking a leap into the unknown. Eriksen is literally putting himself at risk, and he knows how quickly and unexpectedly health can be snatched away. He also knows that in those moments of extreme stress that come with competitive sports — when the heart is pounding, when the adrenaline is pumping, when you’re willing yourself past your limits — he may have to wrestle with the knowledge of what happened at Parken Stadium last summer.

Propper is forsaking material gain as well, swapping the only life he has known for the past decade for something else, an “investment in family and friends,” hoping it will bring the same fulfilment football once brought.

We all search for meaning in our lives and most of us find it somewhere: in friends, family, religion, personal passions, careers. Except being a professional footballer defines you more than most careers. It’s more akin to a life in the military, clergy or law enforcement, but unlike those others, it is not a lifelong pursuit. It ends less than halfway before your time on Earth is (theoretically) over, which is why deciding when and how it should end is such a personal and dramatic choice.

Love and courage has guided both these men in their decisions, despite their journeys ending in very different places.

Sources: Crude remark factored into Udoka ban
Dolphins say QB Tagovailoa ruled out for Week 5
FIA delays publication of its inquiries into whether any team breached F1 budget cap in 2021
Tiger not in initial field for own Hero event in Dec.
Hull with 8 birdies posts 64 to take lead in Texas