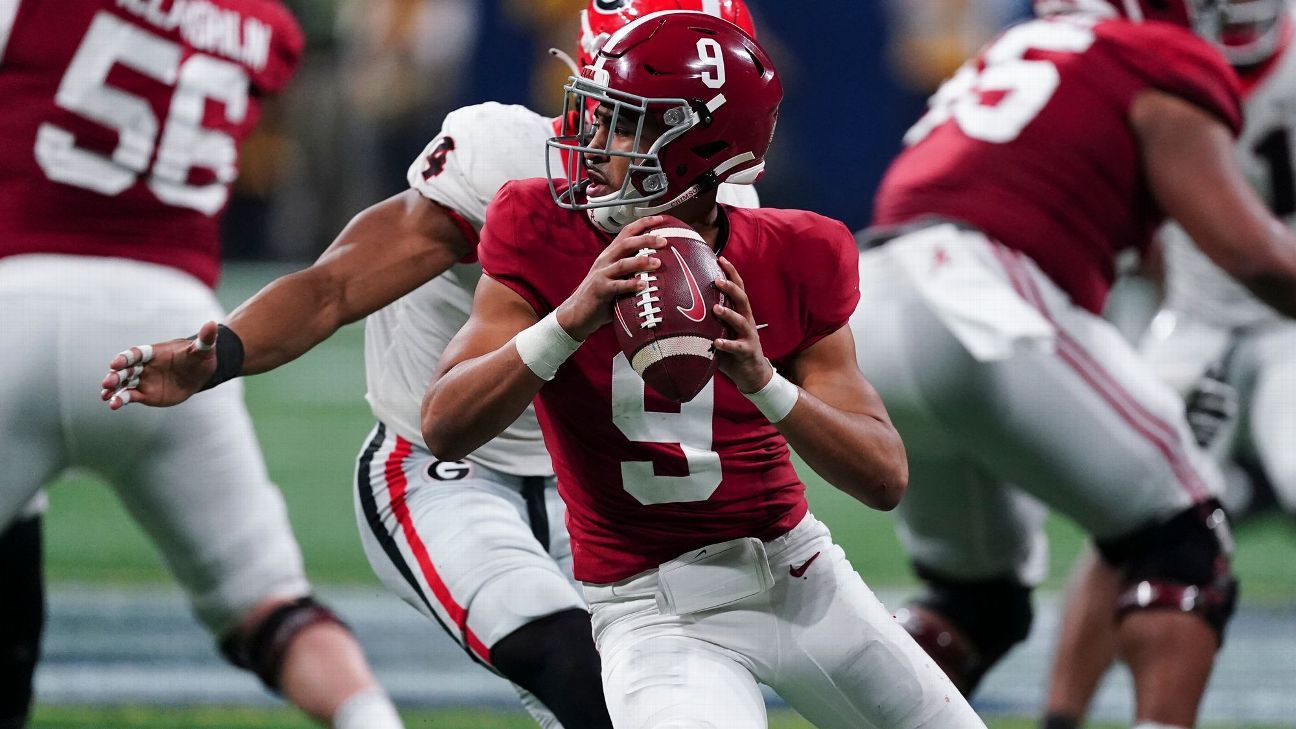 INDIANAPOLIS — Georgia coach Kirby Smart saw enough of Alabama quarterback Bryce Young a month ago to know what the Bulldogs are up against Monday night in the College Football Playoff National Championship presented by AT&T.

“We talk about him as Houdini, because he can make people miss,” Smart said Sunday. “He gets rid of the ball. People don’t even account for the number of times this guy has avoided sacks and thrown the ball with no intention of anybody catching it. But he knows where to throw the ball to not take a sack. When you can do that, you’re really elite.”

Young, this season’s Heisman Trophy winner, set an SEC championship game record with 461 yards of total offense in Alabama’s 41-24 win over Georgia in Atlanta. He passed for three touchdowns and ran for another against a Georgia defense that had allowed only seven touchdowns in 48 quarters entering that game. Young led the Crimson Tide to three touchdowns in the first half.

In his first season as a starter, Young has thrown 46 touchdown passes and just five interceptions. He is fifth nationally in passer rating, one spot behind Georgia quarterback Stetson Bennett.

“[Young] has really good weapons around him, he’s got a really good team around him, but make no mistake, he is elite at what he does,” Smart said. “To have the number of touchdown passes, the interception ratio, I don’t know that I’ve ever seen really anything like that.”

Crimson Tide coach Nick Saban said Young’s ability to prepare for a game and study an opponent is as good as anybody he has had at Alabama and that his steadiness wears off on his teammates.

“He’s a leader, and he’s got sort of an emotional stability about him that he doesn’t really get frustrated or upset in any kind of way even when things don’t go well,” Saban said. “He can stay focused and keep doing what he thinks he needs to do to be able to have success and make adjustments, adapt to what he needs to do. He’s a very, very mature guy, way beyond his years in terms of how he views what he needs to do to be successful.”

As good as Young has been this season, Saban said the key to Monday’s game could be how well the Crimson Tide’s offensive line plays. Young wasn’t sacked against Georgia after being sacked seven times a week earlier by Auburn. Alabama was able to identify and adjust to where Georgia’s pressure was coming from, especially the Bulldogs’ interior pressure, while Auburn hurt Alabama with pressure off the edge.

“If you want to have any success in this game offensively, you have to be able to at least control those guys up front and their front seven to some degree,” Saban said. “They have a very good defense in total, but it starts with that. They create a lot of negative plays. They’ve got some really good pass-rushers that can be disruptive to the quarterback. So I think it probably starts up front in a game like this, and it’s going to be critical for us to be able to play well up front in the offensive line to have any chance of being successful on offense.”

Emil Ekiyor, a redshirt junior who has started all 14 games at right guard for Alabama, injured his shoulder in the first quarter of the Goodyear Cotton Bowl Classic win over Cincinnati and didn’t return. Ekiyor is expected to play against Georgia, although he won’t be 100%. Freshman J.C. Latham filled in for Ekiyor against Cincinnati.

Right tackle Chris Owens is also expected to be available Monday after injuring his foot in the fourth quarter against Cincinnati.

“We talk about him as Houdini, because he can make people miss. He gets rid of the ball. People don’t even account for the number of times this guy has avoided sacks and thrown the ball with no intention of anybody catching it. But he knows where to throw the ball to not take a sack. When you can do that, you’re really elite.”

Smart noted that Saban’s teams are always going to be physical in the running game and pointed to Brian Robinson Jr. rushing for 204 yards against Cincinnati.

“It’s a double-edged sword. You do too much of this, they can hurt you,” said Smart, adding that Alabama is explosive enough outside at the skill positions to mask what’s going on in the line of scrimmage.

Wide receivers Jameson Williams and John Metchie combined for 13 catches for 281 yards and three touchdowns in the SEC championship game, but Metchie suffered a season-ending torn ACL in that game. Freshman wide receiver Ja’Corey Brooks has stepped up with several big plays in recent weeks. He had the 28-yard touchdown catch to send the Auburn game into overtime and had a 44-yard touchdown catch against Cincinnati in the CFP semifinal game.

“That’s the advantage they’ve probably had the last three to four years, the number of wideouts that are just explosive, great playmakers,” Smart said. “And it’s changed the game of football, not just Alabama. You can actually win the line of scrimmage and you could possibly lose the game because of explosive plays. That’s what you’ve got to be careful of.”

Smart was asked Sunday if he felt the pressure from fans and donors to break Georgia’s long national championship drought and bring the Bulldogs their first title since 1980.

“No, I do not,” he said. “What I feel is how do we stop Bryce Young and how do we control their front and how do we run the ball, how do we throw the ball with efficiency, how do we convert on third downs and stop them in the red area. That’s the furthest from my concern because I don’t control that. … My focus and energy and entire mind is on what we can do to help our players play better.”

Trade grades: Horvat fills a need for the Islanders — but at a high cost
Man United’s Eriksen ruled out for three months
Formula 1: Ford to return after 22 years out of sport
LeBron closes in on Kareem as Lakers rally late
Rugby saved trans player Julie Curtiss, and she won’t let the RFU take it from her