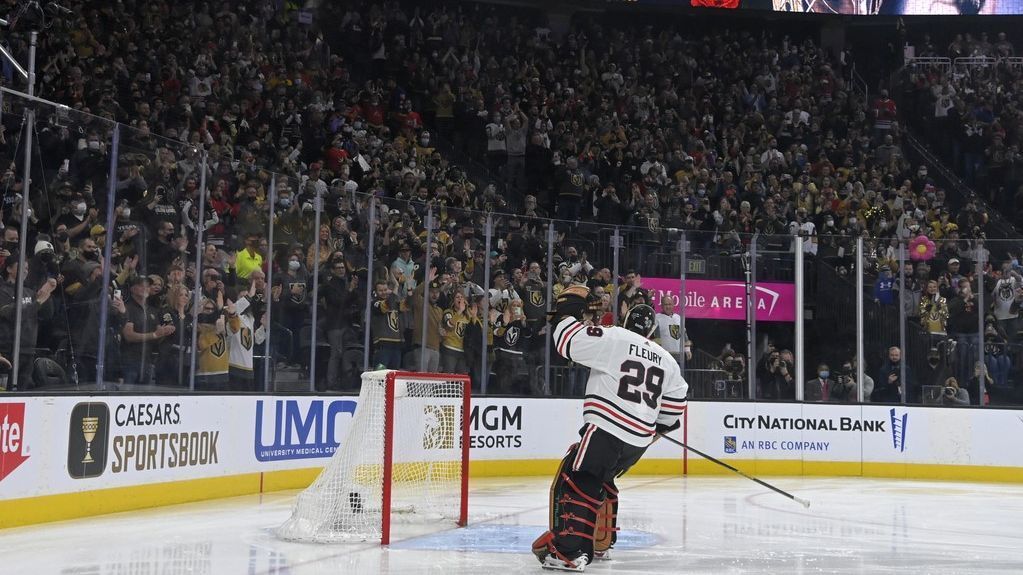 The adoration overflowed Saturday night at T-Mobile Arena, where the 18-year veteran led the Chicago Blackhawks onto the ice for their game against his former team, the Vegas Golden Knights.

Fans lined the end boards, pounded the glass, held up signs and cheered for the man who was the face of the Golden Knights for their first four years in the league. The sold-out crowd then erupted into a frenzy when a one-minute tribute video was played just before puck drop.

Fleury made 31 saves and gave up just one goal in the Blackhawks’ 2-1 victory over the Golden Knights.

“It’s always fun to play there,” Fleury told The Associated Press on Wednesday. “Obviously, it’s good when you’re the home team. It’s one of the best buildings with the best atmosphere in the league. It’s fun to have another chance to play there, and see the guys, see the fans, see the staff — it’ll be nice.”

Fleury instantaneously became the face of the franchise and a fan favorite, long before he led the expansion club to the Stanley Cup Final in its inaugural season. His dazzling smile, intoxicating personality and involvement throughout southern Nevada helped stitch himself into the city’s athletic fabric alongside the likes of Jerry Tarkanian, Greg Maddux and Andre Agassi.

Last season, Fleury went 26-10-0 with a 1.98 goals-against average, .928 save percentage and six shutouts in 36 starts and won the Vezina Trophy as the NHL’s top goaltender. But with the Golden Knights committed to Robin Lehner long term and desperate for salary cap space, Fleury was traded to Chicago on July 27 for Mikael Hakkarainen, a forward prospect they released a month later.

Saturday was the first time he faced them.

“I think it helps that I’ve been through it; I think it’s a little bit of the same anticipation,” said Fleury, 37, who in December became the third goaltender in NHL history to win 500 games. “It’s tough. When I went back to Pittsburgh, I was a little emotional about things, having thoughts and good memories about things and my teammates and stuff like that. I think maybe I’ll try to be more — just try to play hockey.

“It’s hard though because I feel like you don’t want to get [sidetracked] and get emotional, but then at the same time, it is. It was a great time in my life and I have great memories and made some great friends.”

Vegas captain Mark Stone said he knows what Fleury would be feeling, as he shared thoughts from his first visit to Ottawa on Jan. 16, 2020, after spending the first 6½ seasons of his career with the Senators.

“It’s obviously an emotional time when you pour your heart and soul into a city and a team and you go back there for the first time; I’m sure there’s going to be nervous energy,” Stone said after Saturday’s morning skate. “I just remember being excited getting to play in front of the fans that I got to play in front of for how many years I was there. I’m sure he’s gonna feel a lot of that same energy.”

Fleury’s visit brings an end to an emotional week in Las Vegas, as it started Sunday with former Golden Knights Nate Schmidt and Paul Stastny visiting with Winnipeg. On Thursday night, it was the team’s first coach, Gerard Gallant, and fan favorite, Ryan Reaves, returning with the Rangers.

“What those guys did in Year 1 here will ever be replicated and they deserve all the love and attention they’re gonna get for that,” Vegas coach Peter DeBoer said.

DeBoer, who coached plenty of games against Fleury during stints with Florida, New Jersey and San Jose, said he was glad he got to spend time on the same bench with the three-time Stanley Cup winner.

“There’s a ton of good memories and anytime you coach a Hall of Famer it’s always an honor,” DeBoer added. “As a coach, those are the players you’ll tell your grandkids that you had an opportunity to coach. And Flower’s on that list.”