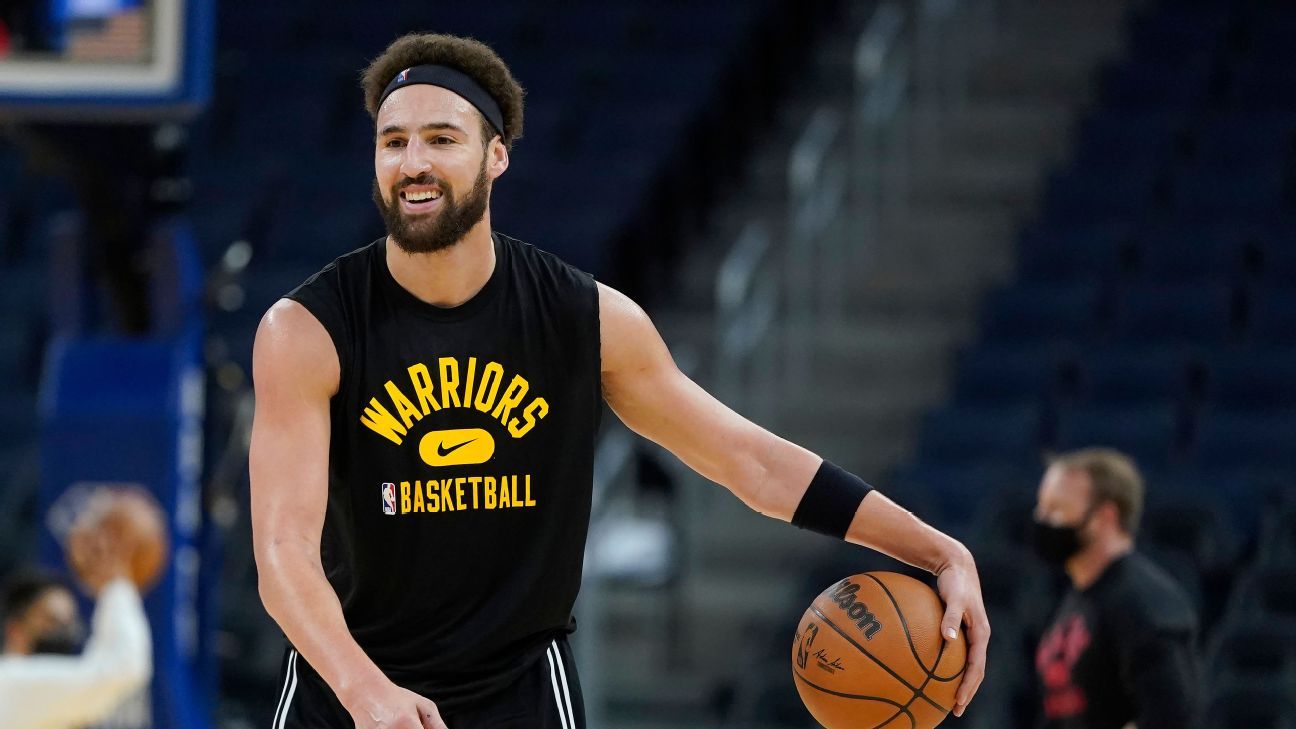 MAKING HIS WAY through the Golden State Warriors locker room following a preseason win over the Los Angeles Lakers, Zaza Pachulia heard the familiar sound of a ball bouncing on the organization’s practice floor.

Pachulia assumed one of the Warriors’ young players was getting some extra shots in. What the longtime NBA big man and Warriors consultant saw next surprised him.

He found Klay Thompson, dressed in a full uniform, shooting by himself. The 31-year-old has been away from the game for over two years while rehabbing a pair of career-altering injuries. He tore the ACL in his left knee in Game 6 of the 2019 NBA Finals and his right Achilles in November 2020.

“That’s a day when he already had a workout,” Pachulia said. “He already got his rehab, workout, whatever he’s doing and he did it. So he was getting extra shots up. It was telling, that moment; [you] understood how much this guy cares, how much this guy misses playing basketball.”

Pachulia, dressed in a full suit, ended up rebounding for his close friend that night on the practice floor. Like so many others in the organization, he has tried to provide any emotional support he can, while also preparing Thompson for his basketball return.

A month later, Thompson, dressed in a No. 77 Jackie Moon jersey — the number is a nod to his perceived snub from the NBA’s 75th anniversary team, and the headband and jersey to the character Will Ferrell portrayed in the 2008 comedy “Semi-Pro” — has just finished the type of personal workout that has become part of his routine throughout the arduous rehab cycle.

As much as he has tried to push away the frustration from not being voted to the 75th anniversary team, the snub bothers him because of what he has accomplished as one of the game’s best shooters, and because of the titles he helped his team win.

After the rest of his teammates complete a workout inside the Warriors’ main practice gym, Thompson, flanked by Pachulia, takes the 14 steps from the locker room through the tunnel and walks onto the floor at Chase Center.

Thompson enjoys the privacy the floor provides. It’s empty, it’s quiet and it’s out of the spotlight that he actively tries to stay away from. He loves the game, but not always the extra attention that comes with being one of the greatest shooters of all time.

When asked why his personality resonates with so many people, Thompson puts his head down and pauses before saying anything.

It’s why Warriors teammates, coaches, support staff and the Bay Area in general have fallen in love with the sharpshooting guard from Washington State over the last decade.

But it’s what Pachulia says next that helps explain why the organization is so ecstatic about adding the former five-time All-Star and three-time NBA champion back into the fold of a team that has vaulted itself right back into the championship conversation.

“And he loves winning,” Pachulia adds. “I’ll tell you that.”

After more than two years away from the game, and with a chip on his shoulder from being left off the NBA75 list, Thompson says he is “hungrier” than ever to get back to his winning ways and join a team that is primed to return to the postseason after a two-season absence.

“I know myself. I know how good I am. I know the things I’ve done. … It’s like — how many times do I have to do something that no one else has ever done before and get respect? Do I have to go score 50 in a quarter now? Like, what the hell? It’s whatever though, man. It’s over with. I’m going to use it as fuel.”

WHEN THOMPSON TORE his right Achilles, his friends knew they had to do something to help take his mind off the severity of the situation. Knowing that the mental aspect of rehab can be just as taxing, the Splash Brother’s teammates rallied behind him in different ways.

Pachulia, for one, wanted Thompson to find some kind of outlet for himself outside of basketball.

“That’s the exact conversation we had,” Pachulia said. “What hobbies can you find? … I want him to come back, I want him to — commit [to rehab]. You have to commit. It’s hard to commit if you’re not enjoying your life and yourself. So obviously basketball is taken away, so what’s next? How can we help Klay? He said, ‘Let’s try a boat. Let’s do it.'”

Thompson — who has long discussed his love of the water, having spent plenty of time in the Bahamas, where his father Mychal is from — purchased a boat in Southern California during the early part of the pandemic and drove it back to his home in the San Francisco Bay Area.

“I just always loved swimming,” Thompson explained. “Visiting family in the Bahamas growing up, I’ve really enjoyed snorkeling and seeing all the sea life, and I think I took that trait into adulthood. I just really love the sense of adventure and exploration and seeing new things that are right in your backyard that you probably weren’t able to see before if you didn’t have a boat or access to the ocean. And it just opened up a whole new world for me.”

The boat, which Thompson still drives to games and practices, has provided an opportunity for him to clear his mind and invest in a new hobby.

“I think everybody needs an outlet of some sort,” Warriors head coach Steve Kerr said. “For Steph and Andre [Iguodala], it’s the golf course. … So I think the fact that Klay has found so much joy in taking his boat out on the Bay, it’s a perfect way to balance his life out, give him the sunshine that he needs after being in the gym all day.”

Thompson even extended an invitation to his teammate, 2020 No. 2 overall pick James Wiseman, to join him over the summer on his boat. The 20-year-old center, who had his rookie season cut short because of a meniscus injury, has been rehabbing alongside Thompson. They’ve developed a friendship based on hours together in the gym and the locker room.

The pair’s paths continued to cross as they went down for several rehab assignments with the Warriors’ G League affiliate in Santa Cruz, California. Thompson used the moment to advocate for the signing of Quinndary Weatherspoon, who caught his eye during practices. Weatherspoon, who is now signed to a two-way deal with the Warriors, said Thompson’s advice was simple.

“Guard them like you guard me and everything else will take care of itself,” Weatherspoon said. “He’s just telling me to keep playing within myself and everything will work out.”

Wiseman noted that Thompson was “very inspirational to me,” and tried to keep the young center’s spirits up as the pair went through the arduous rehab process together.

“During the summer when I was still on my crutches and stuff and I had my brace, I was like really down mentally,” Wiseman admitted. “But at the same time I’m a really strong person, but it’s just hard watching the games and you can’t play. So I was kind of down mentally, but he encouraged me to keep going. … We just kept each other uplifted throughout this offseason and we’re doing it every day.”

Even with a healthy outlet and the support of his teammates, Thompson couldn’t hide his frustration after a Nov. 26 win over the Portland Trail Blazers. Sitting in street clothes, he sat on the bench for over 30 minutes after the game, much of that time spent with a towel over his head. Teammates and coaches, including Kerr, Draymond Green and Stephen Curry, came out to check on him as fans chanted “Thompson! Thompson!” to try and lift up his spirits.

“Two-plus years is a long time,” Curry said later. “I think going into this particular season and him getting closer than he’s ever been to getting back on the floor — kind of predicted this would be the hardest part of his journey because he’s got the basketball back in his hands every day, feeling like himself. He’s playing pickup, he’s around our practices and he’s back with us in those types of situations, but he’s still not on the court. … And it shows how much this game matters to him.

AS THE REST of the world wonders exactly what kind of player Thompson will be when he returns, he is hell-bent on showing that he can be the same player he was before the injuries.

While the Warriors have gone out of their way to make sure Thompson feels comfortable as he returns, they also have the added bonus of a 29-9 record heading into Sunday’s game against the Cleveland Cavaliers, one game behind the Phoenix Suns for first place in the Western Conference. Kerr has already said Thompson will start, although it remains to be seen how many minutes he will play early in his return.

“I’m excited to get out there and prove to people who I am,” Thompson says. “I know they forgot because I’ve been out for two years, but I’ve never been hungrier seeing that stuff. Never been hungrier. And the best way at revenge is to win. Seriously.”

That’s exactly what Curry and the rest of the Warriors are banking on — and that’s the message one Splash Brother had for the other.

“It’s out of his control,” Curry said. “He’s quickly turned it to the fuel-to-the-fire type of situation. But it’s also, for him, having been away from the game for that long, he’s like, ‘People forgot how good I am.’ So that’s his mission — remind people.”

Thompson struggles to put into words what it will be like when he finally returns.

Curry, however, does not.

“It’s like when you go to a Broadway play or you go see ‘Hamilton’ and all the cast comes out at the end,” Curry said. “Like the whole stage is doing the bows and curtsies and all that, and the whole audience is going nuts because they really appreciate the show that they got to see. … And then it will hopefully be an energy like during his 37-point quarter where every time he shoots, it will be like a game winner.”