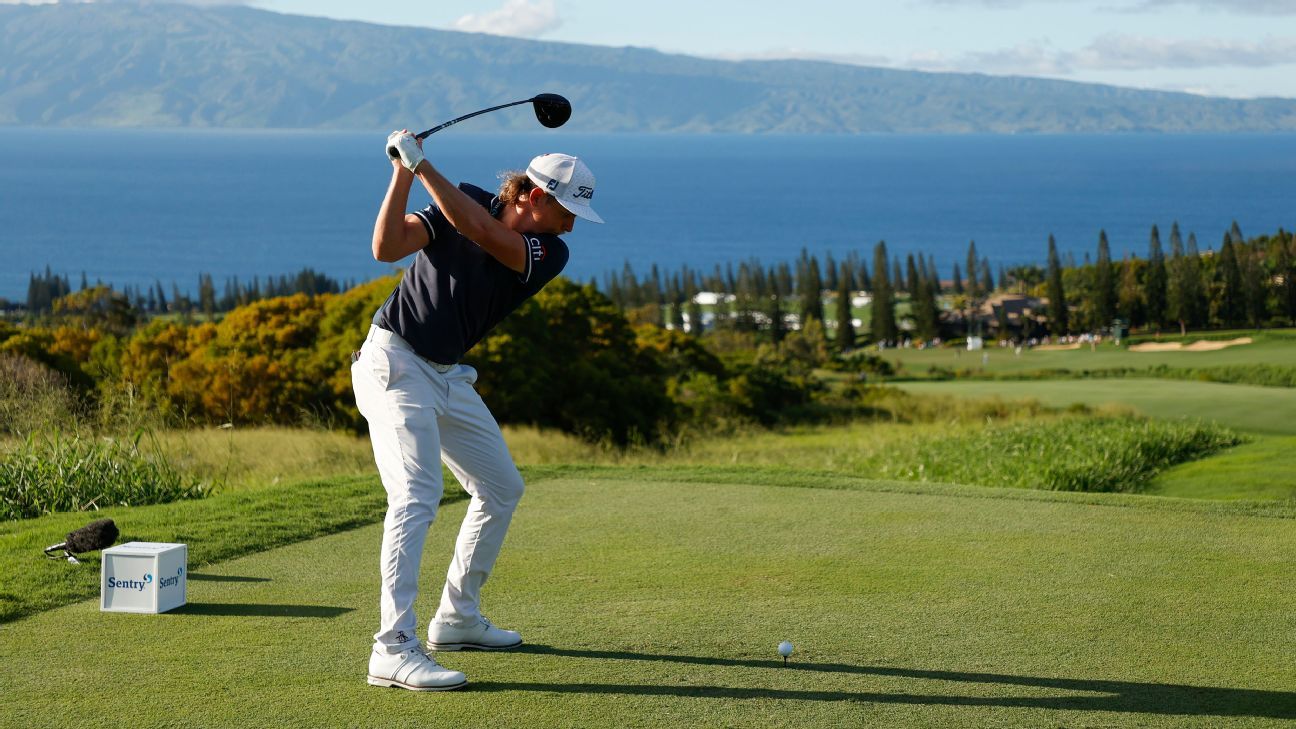 KAPALUA, Hawaii — The scenery off Kapalua suggests a chill vibe. The scoreboard at the Sentry Tournament of Champions delivered a clear message to get a move on it.

Smith opened with two straight bogeys to not only lose his one-shot lead, but fall completely off the first page of the leaderboard. And then the Australian made a sensational recovery, capped by four straight birdies at the end for a 9-under 64 and a three-shot lead.

“Few poor shots, a silly three-putt on the second,” Smith said. “I had to hit the reset button.”

Smith was at 17-under 129 and matched the 36-hole record at Kapalua first set by Ernie Els in 2003 when he blew away the winners-only field and won by eight shots.

Smith doesn’t figured to have it that easy on the weekend.

Blessed with another day of ideal scoring conditions — a warm sun, very little wind by Hawaii standards and preferred lies as the Plantation Course recovers from rain — all 38 players were at par or better. The average score was 67.8, nearly two shots better than Thursday.

Jon Rahm, the No. 1 player in the world, didn’t miss a fairway or a green the entire round and posted another 66, leaving him three shots behind along with Daniel Berger (66).

Patrick Cantlay, the FedEx Cup champion and PGA player of the year who had not competed since the Ryder Cup in late September, missed an 8-foot birdie putt on the final hole and had to settle for a 67. He was four shots behind and had reason to be optimistic.

The longest of Cantlay’s six birdie putts was just under 6 feet. He missed four birdie putts from about 10 feet or shorter.

“I played great and got absolutely nothing out of it,” Cantlay said. “It just means my game is in a good spot and I’m well-positioned for a good weekend.”

So is Rahm, who had not been at a tournament since he missed the cut in Spain on Oct. 15, wanting to take a big breather. The ideal that he got off the plane on Maui, went to the golf course and played like he never went away is a bit overcooked.

He practiced. He worked on his body and his game. And he’s playing like he never went away.

“If anybody expected any rust — which I did a little bit — it really isn’t there,” Rahm said.

Anything worse than 68 meant losing ground.

Phil Mickelson, the 51-year-old PGA champion who’s at Kapalua for the first time in 21 years, got within one shot of the leaders as they were just starting. It was never going to hold up, and Lefty didn’t help his cause with a wild drive on the 17th that led to bogey and then finishing his round by missing a 3-foot par putt. Those bogeys gave him a 69. He was tied for 30th.

Smith wasn’t alone in his poor start. British Open champion Collin Morikawa had two bogeys and no birdies on the front nine. He birdied five of his last eight for a 70, those he was nine shots out of the lead in his bid to reach No. 1 in the world.

Bryson DeChambeau wasn’t going anywhere in a hurry, and then he had reason to wish the round would never end. He birdied five of his last seven holes for a 68, including a penalty shot on the par-5 18th. He holed out from 65 yards for birdie, though he was eight back.

Smith went from the right rough on the opening hole to a back bunker and missed a 12-foot par putt. He three-putted from 40 feet on the par-3 second hole. He was sliding.

And then he began his big run with a 35-foot eagle putt on the par-5 fifth, and before long he was right back in the game.

The finish was special. Smith drilled his second shot so purely on the par-5 15th that it caught ridge and rolled out to 8 feet for a look at eagle that he narrowly missed. In trouble off the tee to the left of the 16th, specks of mud on his ball, he used the slope at the back of the green for a shot that rolled out and then rolled back toward the hole to 6 feet for birdie.

He hit 7-iron to 15 feet for a third straight birdie on the 17th, and then capped off his round with a tough two-putt down the grain from 45 feet for a final birdie.

All that after a bogey-bogey start. As for that chill vibe? Smith has that mastered, even when he was losing ground before he could even get started.

“I’ve been playing golf basically my whole life. I could figure it out pretty quickly,” Smith said. “Like I said, I figured it out within a few holes, started to feel really comfortable there, especially with the driver. Yeah, then the putter felt good the whole day.”