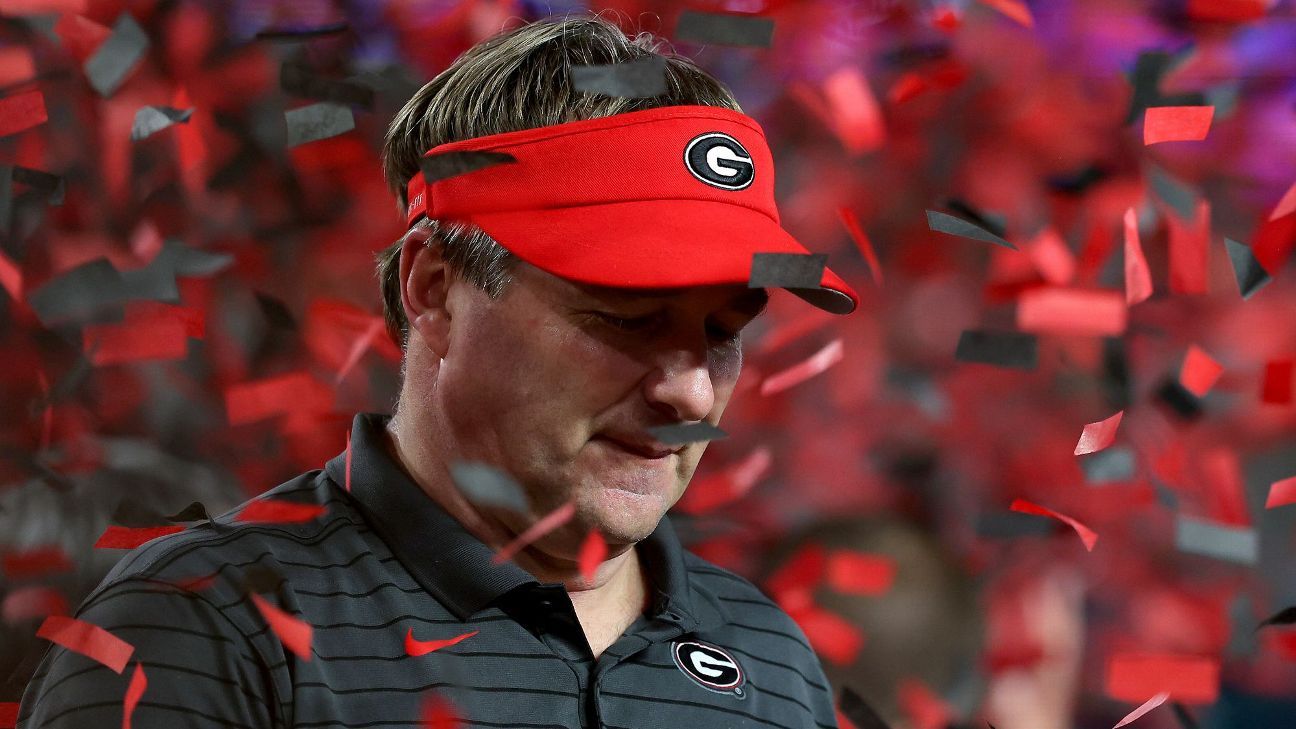 Aaron Murray had already committed to Georgia in 2008, but he’d never been to a game at Sanford Stadium before the Bulldogs’ regular-season showdown with Alabama that year.

Murray was among the top recruits in the country, and his No. 1 priority that Saturday was convincing a few other big names to join him as part of the 2009 signing class. This game figured to be the perfect opportunity to close the deal. Georgia had entered the 2008 season ranked No. 1 in the nation, led by Matthew Stafford, Knowshon Moreno and A.J. Green, and was off to a 4-0 start. It was a prime-time game, national TV. ESPN’s College GameDay was on campus that morning, and the Bulldogs had already announced they’d be wearing their famed all-black jerseys, which they’d worn to much fanfare during wins over Auburn and Hawai’i the year before. The environment was electric, well, until about 20 minutes after kickoff.

By halftime, Alabama led 31-0. The Nick Saban era had officially begun, and Georgia’s hopes for a national championship in 2008 were all but over.

“I just remember at halftime, they’re getting their butts spanked,” Murray said. “And all these recruits were saying, ‘I thought Georgia was good. What’s the deal?’ I just said it must’ve been an off night but, ‘Hey, those jerseys look sweet.'”

Even that wasn’t much of a selling point. The game was so embarrassing for Georgia, the black jerseys were actually retired for the next eight years and have made just two appearances since (a token showing in a small-time game vs. Louisiana-Lafayette in 2016 and last year vs. unranked Mississippi State).

That 2008 game was the first chapter in what has since become a horror story for Georgia. For all the Bulldogs’ success over the past 14 years — only Alabama, Oklahoma, Clemson, Ohio State and Oregon have a better record among Power 5 teams since then — the narrative has been defined by games against Saban and Alabama. On Monday, in the CFP National Championship presented by AT&T (8 p.m. ET on ESPN/ESPN App), Georgia has yet another chance to rewrite the script and finally make the case that there’s no spell preventing the Dawgs from toppling mighty Alabama to reach the promised land.

Unless, of course, that curse is real.

“I think the rational folks think we can do it,” Smith said. “But we haven’t done it, so until you do it, there’s going to be all kinds of speculation that can be very negative.”

To call the Dawgs and Tide rivals would be misguided. Georgia has its share of heated rivalries — Florida, Auburn, Georgia Tech, foremost — and Alabama likely wouldn’t even crack the top five. They first played in 1895, and both teams were charter members of the SEC. The played regularly before 1965, with Alabama dominating the bulk of the rivalry, but in 1963, the Saturday Evening Post ran a story claiming that Alabama coach Bear Bryant and Georgia athletic director (and former coach) Wally Butts had conspired to fix the 1962 game (a 35-0 Alabama win). Both denied the claim, but it forever altered the rivalry, and the two schools played just twice over the next decade. Any true fire that burned between them had been extinguished. In the 30 years from 1978 through 2007, they played just eight times, with Georgia winning five.

Saban’s Alabama teams have dominated college football for the past 15 years, winning six national championships, and no program has suffered more as a result than Georgia.

There’s the 2012 SEC championship game, when a mistimed completion to Chris Conley ran out the clock on Georgia’s upset bid against Alabama.

There’s the 2017 national championship game, which Georgia led 13-0 at the half before Tua Tagovailoa came off the bench to carry the Tide to a 26-23 overtime victory.

The next year, Georgia had another shot at Alabama in the SEC title game, up 28-14 late in the third quarter. This time it was Jalen Hurts who came off the bench in relief of an injured Tagovailoa, leading the Tide to a 35-28 win.

And just a month ago, with Georgia the unquestioned No. 1 team in the country and Alabama fresh off a nearly disastrous Iron Bowl, the Tide once again quashed the Dawgs’ hopes, dominating a seemingly impenetrable defense to win 41-24.

“I cried,” Georgia linebacker Nolan Smith said of the aftermath of the SEC title game. “I’m 20 now. I’ve been playing football since I was 4. That’s 16 years, haven’t won anything. Haven’t won a championship. And that’s one thing that keeps me going. That’s just something in the back of my head that I know that keeps me driving and I just want to win.”

In the 2012 SEC championship, with the Tide leading 32-28, he led Georgia on a potential game-winning drive. The Dawgs had the ball, first-and-goal at the Alabama 8 with just 15 seconds to play and the clock running.

“People say we should’ve clocked the ball,” former Georgia coach Mark Richt explained in a measured, matter-of-fact tone that suggested he’s told this story a million times before. “But if you throw into the end zone, you’re going to get three plays. If you clock it, you’re going to get two. Strategically, it was not a bad thing.”

Problem is, the strategy backfired. Murray’s first-down pass was tipped and caught by Conley, who couldn’t get out of bounds before the clock expired, sending Alabama on to the BCS national championship game, where the Tide annihilated Notre Dame.

“I’d love to put it behind me, but I don’t think that’s ever going to happen,” Murray said. “I still have nightmares about that drive.”

In Murray’s mind the Dawgs should have been playing Notre Dame in that championship game, and the result would’ve almost certainly been a ring for him, Richt and the rest. And from there, what might’ve been?

Gene Wojciechowski discusses Georgia QB Stetson Bennett’s mindset as he prepares to take on Alabama in the CFP title game.

Take Alabama out of the equation and it’s not a huge leap to suggest that Georgia might have two or more championship rings over the past decade and be recognized as the preeminent team in the sport. Instead, Saban has six titles and a perfect 7-0 record against the Bulldogs since 2008.

On Monday, he’s hoping to add a seventh championship and yet another ugly chapter to Georgia’s ledger of misery.

Well, that’s a tough question, mostly because Smart doesn’t know what a boogeyman is.

“They’ve also been a problem and a thorn for any team they’ve played besides ours,” said Smart, who was the defensive coordinator at Alabama for the 2008 and 2012 wins over Georgia. Sure, but none of those other teams are playing Alabama again, with yet another national championship on the line.

Stetson Bennett was a walk-on freshman in 2017 when Tagovailoa pulled Alabama from the abyss and cost Georgia another national title. Five years later, he’s the Bulldogs’ starting QB, the guy tasked with putting an end to this miserable legacy, and as much as he’d love to say there’s no monkey on the Dawgs’ backs, he knows better.

“I know it means a lot to a lot of people,” Bennett said. “Is it just another game? No, I’m not silly. But I don’t think for 20-year-old kids you can put that kind of pressure on yourself because you might go crazy.”

No sense ignoring the obvious, Murray said. As much as the Georgia players will go into Monday’s title game trying to compartmentalize, history is inescapable.

“The media is going to continue to talk about how you haven’t beaten Alabama and look at recent history and look at what happened four weeks ago,” Murray said. “You can look at the film and say Georgia is more talented, but every single day all you hear is Georgia can’t get over the hump, Georgia can’t get over the hump. You want to walk into the stadium with the confidence of knowing you can win the game, but that’s in the back of your head. That’s part of the reason Alabama has had so much success the past 15 years. When a team looks across the field they see Nick Saban, and the trophies. And the success. And the first-rounders. And the Heisman Trophy winner. And you say, ‘Man, how can we get through this?'”

So how does Georgia manage to forget that ugly history and finally conquer big, bad Alabama?

Before Alabama became Georgia’s supposed boogeyman, it was Florida that haunted Richt’s dreams, until eventually, things changed. Georgia won in 2007, the entire team celebrating a touchdown in the end zone midgame, and since then, the two programs have played about even. The key to finally escaping Florida’s long shadow, Richt said, isn’t much different than what Smart is preaching now.

“The thing that’s most important in football is what your assignment is and what your job is,” he said. “It sounds boring, but it truthfully is the only thing that really matters. What do I do on this play in this situation? That’s what you focus on as a coach.”

And when it comes to the X’s and the O’s, the actual players on the field, there’s really no reason to think Georgia can’t win.

Murray, now an analyst for CBS Sports, has watched all the film. He saw the defense make a dozen critical mistakes in the SEC championship game — mistakes it hadn’t made all season, mistakes that can be easily corrected. He has scouted both teams and says he thinks Georgia has more talent. This might be Georgia’s best team ever, Murray said, and it’s certainly among Saban’s weakest teams at Alabama. All of that should add up to a different outcome, to Georgia finally emerging as the nation’s best on the biggest stage.

That’s what should happen. But Murray has seen this all unfold before, and there’s a long path between what’s expected and what actually happens.

“Once it happens for the first time, if Georgia wins this game, I think Kirby can go on a very similar run to what Saban has done,” Murray said. “I could see Georgia, over the next 10 years, winning three national championships. But if you don’t win now, is it that you just have to wait until Saban retires? That will be the narrative once again.”

‘Holy crap, we got a shot’: Inside the 49ers’ season-changing Christian McCaffrey trade
Braves ink Snitker to extension through 2025
Spartans making deals in fracas vs. Wolverines
32 teams, 32 looming free agent decisions: Which players will return to their team?
Caufield chose surgery given Habs’ playoff outlook