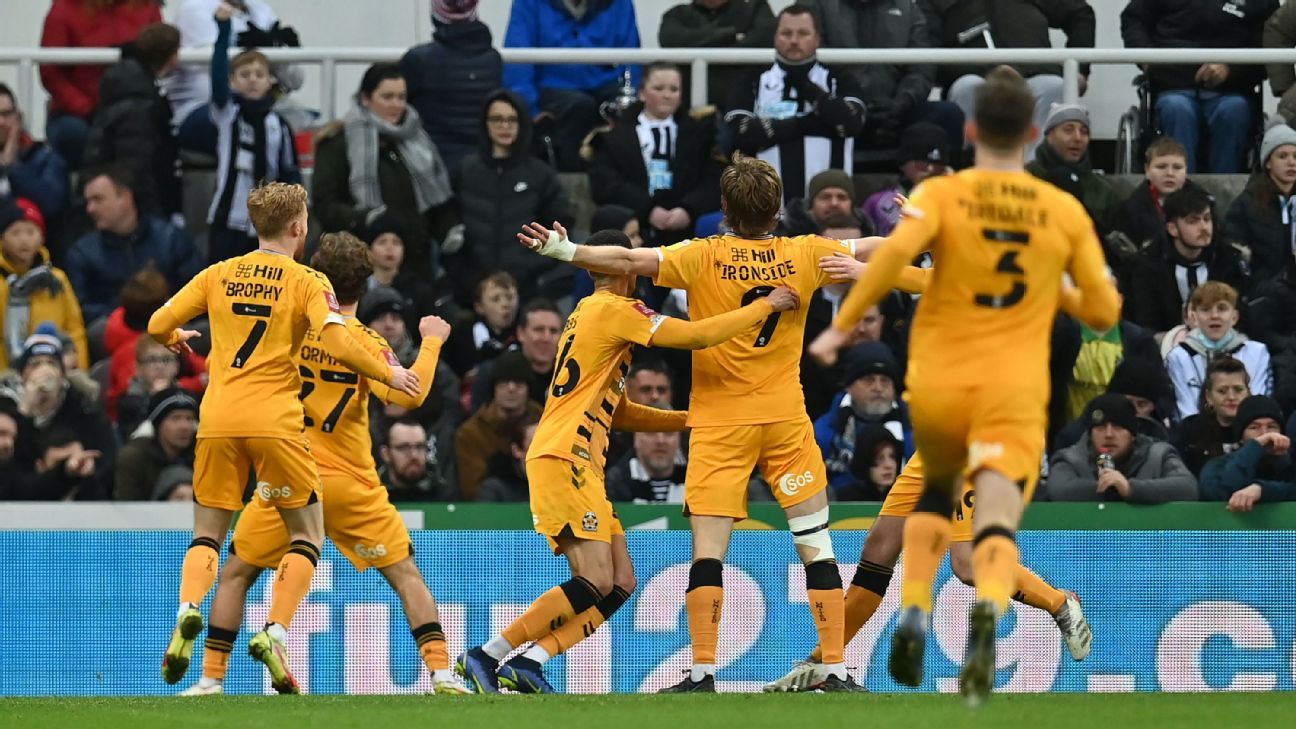 Newcastle United suffered a humiliating 1-0 home defeat by third-tier Cambridge United on a day of FA Cup shocks in the third round (stream all games LIVE on ESPN+ in the U.S.)

Premier League strugglers Newcastle flexed their new financial muscle by signing England full-back Kieran Trippier from Atletico Madrid on Friday and he made his debut. But humble League One side Cambridge were undaunted as Joe Ironside fired in a second-half goal and keeper Dimitar Mitov made a series of superb saves to seal a famous victory and send their fans into delirium.

Mitov made an incredible save in stoppage time to deny Joelinton an equaliser and Eddie Howe’s side were booed off at the final whistle as Newcastle’s season went from bad to worse.

“It is unbelievable what we just did today, but we always knew we had nothing to lose,” Mitov said. “We need to be the best version of ourselves and that is what we did today. We always had that belief, look at how many supporters have come, we sold out.”

Earlier, Burnley became the first Premier League casualty of the third round when they lost 2-1 to Huddersfield Town, who came from a goal down to win late on at Turf Moor through Matty Pearson’s 87th-minute header from a corner. Jay Rodriguez’s header had give Burnley the lead but Josh Koroma equalised for the visitors in the 74th minute.

Non-league Kidderminster Harriers, the lowest-ranked team to survive until the third round, pulled off a shock when the sixth-tier club beat Championship side Reading 2-1. Elsewhere, Boreham Wood made sure two non-league sides will be in the fourth round when they beat AFC Wimbledon 2-0.

Holders Leicester, who beat Chelsea in last season’s final to win the competition for the first time, eased through into the draw for the fourth round after a 4-1 win over Watford with goals by Youri Tielemans, James Maddison, Harvey Barnes and Marc Albrighton.

Joao Pedro replied for Watford, managed by Leicester’s title-winning manager Claudio Ranieri, but apart from a floodlight failure that caused a stoppage on the hour, it was relatively smooth progress for Brendan Rodgers’ side.

Crystal Palace recovered from an early scare as they secured a 2-1 comeback victory at London rivals Millwall with goals from Michael Olise and Jean-Philippe Mateta.

Premier League Brentford enjoyed a comfortable 4-1 victory away to Port Vale thanks to a Bryan Mbeumo hat-trick.